Sunday, July 27th was the day of my second triathlon of the season and it was a good one. Race for the Border was presented by Tri To Finish and took place on Belle Isle in Detroit, MI. I’ve only been to Belle Isle once and that was 10 years ago. I thought the race would give me a good excuse to visit again, plus the course was said to be flat and fast – always a bonus! 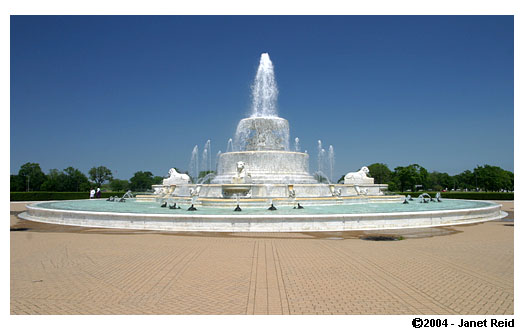 A photo from my first visit to Belle Isle.

Matt was kind enough to wake up crazy early and come along for support and to take photos. All of the awesome race photos here are courtesy of Matt. We got to Belle Isle just after 6:00 am and ran into our buddy Jeff, a.k.a. Detroit Runner, who was doing the duathlon. I got my bib, a nice cotton shirt, and got marked up.

A cool design for this race shirt.

I took my bike to my assigned rack and was able to pick a spot on one end since I was there so early. That gave me plenty of room for my shoes and other stuff. Next, I walked over to the beach to test the water. It had been announced that the temperature of the Detroit River was 67 degrees. I still haven’t tried a wetsuit yet and was thankful that the water felt warm enough for me.

Testing the water for a few minutes before the start.

Out of the four triathlons I’ve done so far, I’ve been lucky enough to have a wave start for each swim. I wasn’t thrilled about it, but this race was my first chance to experience the madness of a mass start. Everyone had to line up on the beach and run into the water when it was time to start.

Just before the start of the race.

I believe 120+ people participated in the sprint triathlon. I tried to move down the beach as far as I could to get a little bit of space. Once the race started and I hit the water, it didn’t matter – everyone was headed toward the same orange buoy. I ended up rotating between freestyle and breaststroke because it was so crowded that I couldn’t get into a good groove. Arms and legs were everywhere! Like many of the other swimmers, I tried to get as close as I could to the orange buoy so I didn’t add unnecessary distance. In hindsight, it’s probably worth going out of the way just to keep out of the crowd.

Once I got around that first buoy, things opened up. I could finally swim without people all over the place. When I participated in my first triathlon this season, I felt pretty uncomfortable during the swim portion. I was not used to not being able to see where I was going. I made sure to practice swimming in the open water a couple times after that experience. I still didn’t get into a perfect rhythm during this swim, but I was more familiar with what to expect so I didn’t have as much of an uncomfortable adrenaline rush. Swimming through seaweed during one stretch wasn’t my favorite part, but there was nothing I could do about it except keep swimming! We swam a rectangular course that sent us with the flow of the current for a good portion of the swim. I didn’t notice any benefit if I did catch the current. However, I suspect that it must have helped because my swim time was much faster than I had expected. 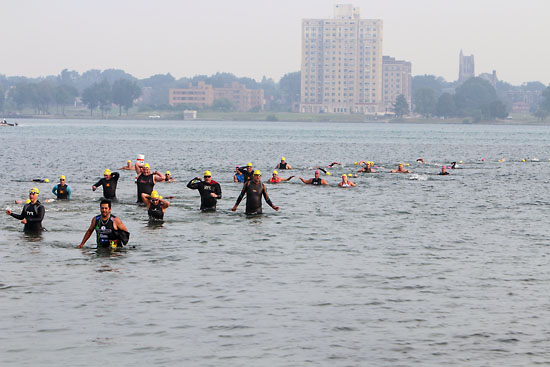 My official swim time was 15:03, including the run from the beach to the transition area.

Done with the swim.

I wasn’t super speedy through the first transition – it took 1:47 before I headed out for two counterclockwise loops around the island. When I first considered signing up for this race, I was a bit skeptical about the bike course. It seemed like a lot of turns on the west end and I wasn’t so sure about looping in a circle around the fountain. 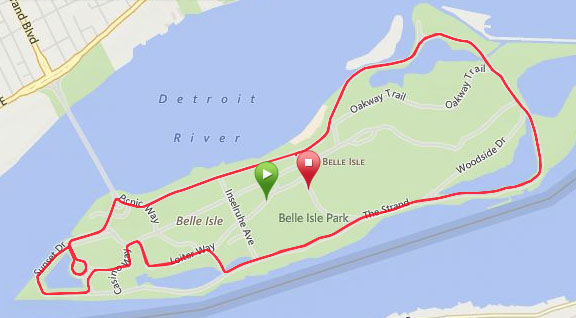 Sure enough, I wasn’t thrilled about the turns. Some of them were pretty sharp and I had to slow down quite a bit. It was hard to gain momentum during that portion of the course because I kept slowing down. I’m not super smooth on the bike as it is, so I’m especially cautious when it comes to sharp turns. That was just one small portion of the course though, and the rest was pretty nice. We used a bike lane for most of the race and the surface was good. As we came around the northeast part of the island and headed west again, resistance from the wind was very noticeable. As usual, I was quite aware that the bike portion was my weak spot as the speedy men flew by. I had hoped to do better than 17-18 miles per hour on the flat course, but no such luck. 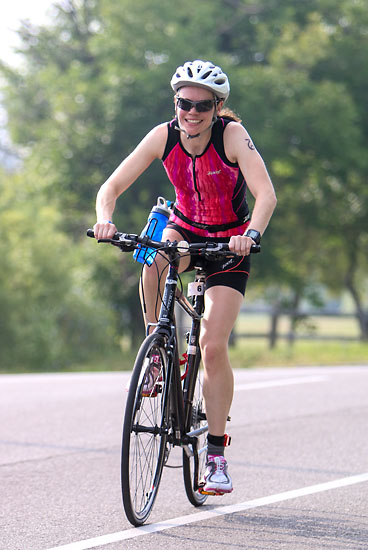 I look much happier in the picture than I actually felt!

My bike time was 40:47, and I made it through the second transition in 51 seconds. Time for the run – my best part! 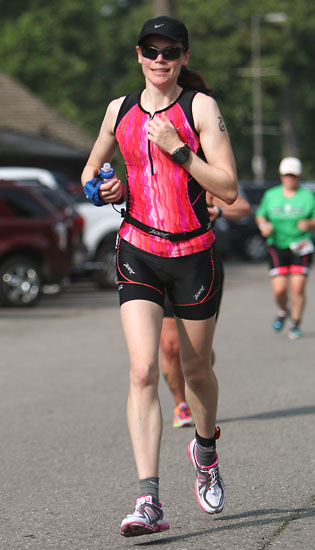 Happy to be running!

The sprint athletes ran two loops of the T-shaped course. I didn’t really notice any heaviness in my legs off of the bike. I did notice that my breathing was pretty labored though. When I looked at my Garmin, I was surprised to see that I finished the first mile in 7:23. No wonder my breathing was so bad! I slowed down a little for the second mile, telling myself that I might not be real fast, but I’d keep running. I also thought about how the idea of doing an Olympic distance triathlon suddenly seemed a lot less appealing. If I felt so miserable within the first mile of the run, getting through six miles could be pretty nasty.

The out and back nature of the run course was kind of nice because watching the runners in the opposite direction helped distract me. I first noticed the heat as I ran into the sun on the way back to halfway point. Whenever I run multiple loops of a course, I always want to be done after the first. I kept pushing though and did what I could.

No longer feeling like the run was my favorite part…

Both feet off the ground as I forced a smile for Matt!

I finished strong with a time of 22:55. I surprised myself with that time because it’s only about a minute off of my 5K PR. I finished with a total time of 1:21:21. It was a relief to be done! I had no idea how I’d done overall because of the mix of people doing the super sprint, the sprint, and duathlon. I was happy with how things went though. 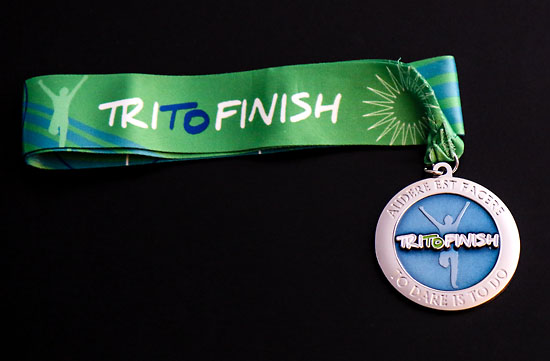 After collecting a bottle of water, I went to find the food. I have to admit I was pretty disappointed when I only found halves of bagels and bananas. I’ve gotten used to 5K races having a wider selection of food. After racing for nearly an hour and a half, I had hoped to find more. I guess in the future I ought to bring a Clif Bar or something just in case. I really need to refuel after that kind of effort, and the long wait for the awards ceremony combined with the lack of food got to me after a bit. I guess I should have stopped by the ice cream truck that was circling the island!

I found out that I placed third in my age group, so we had some time to kill before the awards ceremony. The Navy was there with a pull-up bar so I went over to do a few. 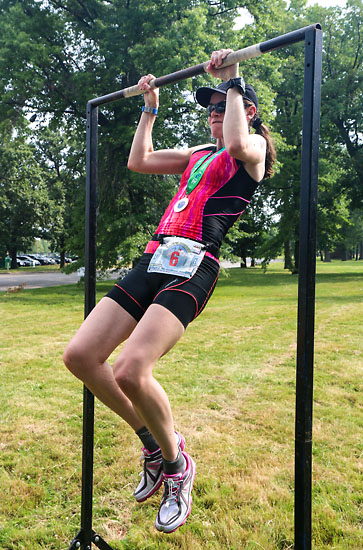 Finally the awards ceremony began and I received a bronze key chain for being third in my age group. Pretty cool!

With the other speedy women in my age group.

Overall, this was a great experience and I’m really happy with how things went. Like every other race I’ve done, the run has been my strength while the bike has been my weakness. I have to keep working on my cycling despite really just wanting to run. Though I’m always a little critical of myself, I’m also thrilled. After more than six weeks off due to injury, I slowly restarted my training from scratch in mid-April. I wasn’t sure that I’d be able to participate in triathlons at all this summer. After a race like this, I think I’ve been able to shake my uncertainty. The triathlon season is short, so I’ll continue to train hard and hopefully do another race or two within the next month or so.

One thing I love about running and biking is getting to explore places I probably wouldn’t see otherwise. I’ve seen a lot of good scenery the last couple weeks, so this is a picture-loaded blog entry.

In order to make time for one of my long runs, I had to head out at the crack of dawn. As hard as it is to get up that early on a Saturday, I really need to do it more often because it was one of the most beautiful runs I’ve done. Stony Creek Metropark is just a few miles from home, so I ran from home to the park, ran a few miles on the mountain bike trails, then ran back home. The pictures barely do it justice, but the park was absolutely stunning in the early daylight. 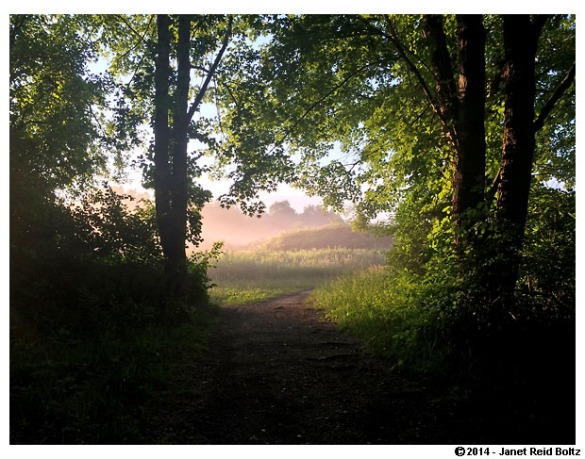 I felt like I was in a storybook when I came across this spot. 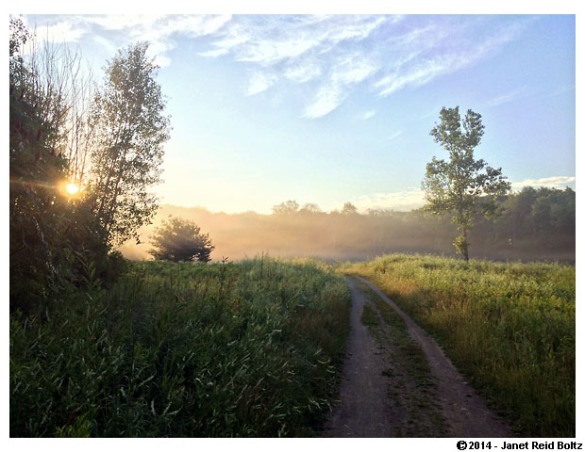 I’ll sacrifice some sleep for this view.

Another beautiful place I’ve run recently was Kellogg Forest in Augusta, MI. While visiting Matt’s parents for a few days, I wanted to run and bike around some places I’d never seen. Although Matt grew up just a few miles from the forest, he’d never run there. I’m really glad he mentioned it and we got the chance to explore the awesome trails together. I don’t run on trails often enough and should try to change that. It was very peaceful and we only saw a handful of people during our two runs there.

Part of the North Country Trail.

Softer ground is easier on the body but definitely more challenging.

On my way into the woods.

Another place we explored was the Kalamazoo River Valley Trail. It’s a very nice trail that was great for biking.

A beautiful day for riding. 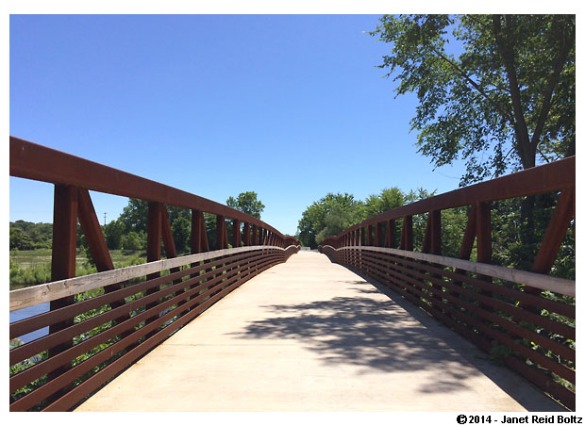 On the way to the nature center.

Matt also led me on a bike ride through Fort Custer State Park in Augusta. The park has campgrounds, mountain bike trails, a beach, etc.

Another beautiful day for a bike ride. 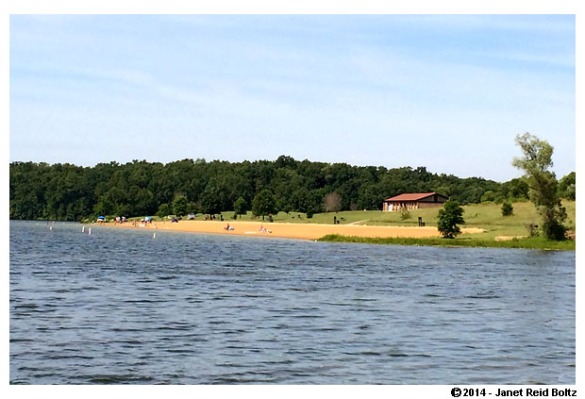 Taking a break to watch some kayakers.

I often end up running and biking around the same areas due to convenience and lack of time, but I hope to work in visits to new places more often. Hopefully I’ll have more pretty pictures to share throughout the rest of the summer!