As the year comes to an end, it’s time to look back and remember the ups and downs. One of my proudest accomplishments was participating in my first Olympic-distance triathlon. It was the one racing-specific goal I had made for the year, and though training didn’t go quite as planned, I still met my goal.

Another fun thing I realized about this year is that I actually received an age group award (anywhere from first to third) for each race I participated in! I don’t put a lot of stock in age group awards because it all depends on how big a race is and who shows up. It’s still kind of fun though and I gathered a cool collection of awards. 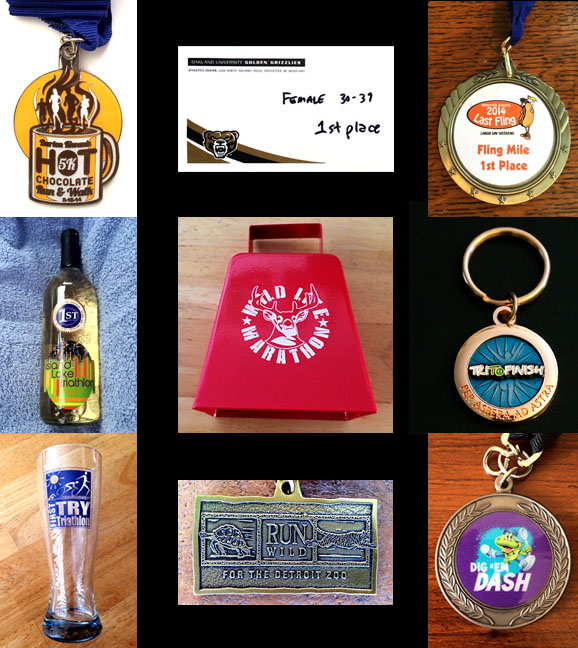 Not everything about the year was great though, and the first half was a bit rocky. I started the year still battling an IT band issue caused by my first marathon in October of 2013. I wasn’t able to run more than four miles at a time throughout January. Fortunately, Dr. Erik Barazsu at The Active Fix in Berkley got me back on track. He really took the time to deal with my specific problems while some doctors take a more generic and less individualized approach. I am very thankful I found him and would recommend him to anyone in the Detroit area who may be battling injuries.

Just as I started to feel good about my progress, a car crash at the beginning of March totally derailed everything. A kid driving on a suspended license flew through a stop sign, nailed my car on the passenger side, and messed up my back. 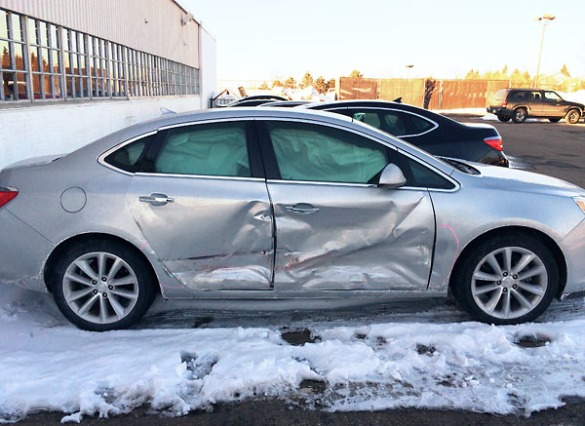 My poor car was totaled.

I didn’t run for six weeks. It was a LONG and frustrating six weeks. When I did start back up, it was a very gradual process. As if my back wasn’t enough of a problem, my IT band flared up again. I had to get back to my hip and glute strengthening exercises, and I basically rebuilt my mileage from scratch.

Although I didn’t get to build as much of a base as I would have liked, I was still determined to participate in my second triathlon season. My first tri of the year came in June. It was one I had done last year, and I shaved two and a half minutes off my previous time. That gave my confidence a boost and let me know that I was getting back on track. A sprint tri in July went well, so I decided to go for it and try the Olympic distance in August. 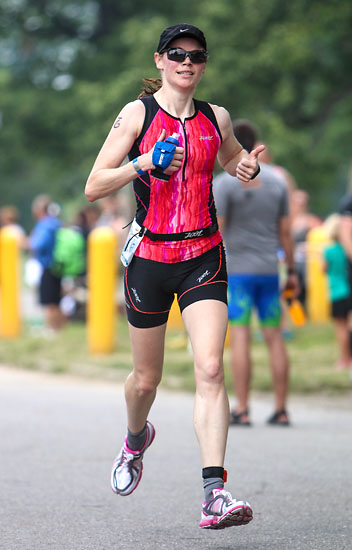 Race for the Border Triathlon on Belle Isle in July.

The Island Lake Triathlon in Brighton was my third and final tri of the year. It was a challenge, but I made it through knowing that I’d want to tackle the distance again in the future. I am very aware that longer bike rides during training would be beneficial though. One glance at an Olympic-distance training plan made me realize how minimal my training time on the bike had been compared to what it ought to be!

Following tri season, I thought it would be fun to do some shorter running races. I started with the shortest I’ve ever raced – a mile. It was a fun new experience and I really didn’t know how to pace myself. With too much energy left at the end, it left me wanting to race the mile again. I was very happy with 6:25 for my first attempt.

A 5K at the Detroit Zoo in September was next, and it was probably the best I’ve ever felt during a 5K. I ran a strong, consistent race, and for once I didn’t feel like I wanted to die halfway through! I think it’s a race I’ll need to do again in the future.

Run Wild for the Detroit Zoo.

I’d hovered just under 22 minutes for the 5K several times, so I was thrilled to finally drop my PR to 21:31 at the Dig ‘Em Dash in Battle Creek. 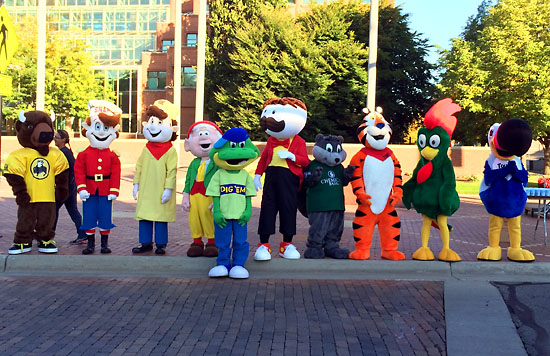 So many fun mascots.

Coming off some solid races, I was curious to see what I could do at the half marathon distance. I’d been training with the intention to run a half marathon during the fall, but I hadn’t really targeted a specific race. A spur-of-the-moment decision in mid-October led me to run the Wild Life Marathon in Concord, MI. A cool morning on a flat, paved trail was the perfect way to capitalize on a solid training segment, and it led to a big PR (1:40:46). 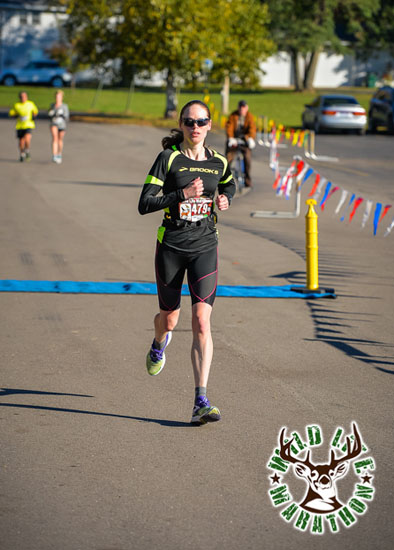 A new half PR!

I felt like it was a good way to wrap up my racing for the year, and I have been in maintenance mode since. I’ve been hovering around 30 miles per week of running and around 40 miles per week of biking. I’ve totally slacked off when it comes to swimming and will try to get back into that routine soon.

After the half marathon, I took time to continue troubleshooting my back issues. Months of going to the chiropractor helped, but it didn’t completely fix me. I’m mostly fine, but one area still flares up and aches when I do certain things. I tried going to physical therapy for the first time in October and was pretty disappointed with the experience. I feel like they had me do a bunch of their typical exercises, but they didn’t adjust for my needs when I made no progress. I tried another doctor who thought drugs would be a good fix. I always try to avoid that approach because I think it just masks the problem rather than solving it. I gave it a try though, and took muscle relaxers and anti-inflammatories until they tore my stomach apart so bad I couldn’t handle it anymore. Side effects from drugs always seem to be worse than the original problem for me. I’m very frustrated with the whole medical field and don’t know what to try next. I’ve been getting massages lately and it’s been helpful, but I’m not sure it’s enough to fix the problem. It looks like something I’ll continue to worry about in 2015.

– Nine races, including one mile, one 4K, three 5Ks, one half marathon, and three triathlons.

– 1,003 miles of running. I barely managed to break that 1,000-mile threshold. I was down several hundred miles from 2013 because I did not train for a marathon and because of the IT band / car accident setbacks.

– 1,472 miles of biking. I’m always talking about how I need to bike more if I want to get better at triathlons. Buying a stationary bike for our basement at the end of last year made a huge difference. I biked nearly 1,000 more miles than I did in 2013, but I’m looking to increase that even more in 2015.

– 34 miles of swimming. I was down several miles compared to last year, mostly because I’ve only been in the pool a handful of times since my last triathlon in August. I need to get back into the routine of swimming at least once or twice a week soon.

– 50 times of strength training. Down from 80 times last year. The car accident is partially to blame since weights cause my back issues to flare up, but I’ve been trying to keep up with at least one session per week.

Looking forward to 2015, I don’t have any specific goals yet. l’ve been toying with the idea of a spring marathon. I might want to spend the winter and spring really building towards triathlon season though. I know very well that marathon training would cause me to neglect the bike. If not a spring marathon, I’ll probably try to run at least one half and think about a full in the fall. I definitely want to do more Olympic-distance triathlons. I plan to spend a lot more time on the bike and really make sure I get in the long rides. I’ve been riding around 25 miles each weekend lately, and should build even more as I approach tri season. I also need to venture into the world of bike shoes. So far I don’t know a thing about bike shoes, so I need to educate myself.

Even if I don’t have many specific goals at this point, I know I’ll keep working hard and hope for a smoother year of training and racing in 2015!