The Crim is a legendary race in Flint, Michigan that draws somewhere around 10,000 participants between the 5K, 8K, and 10-mile races. A Michigan Mile race also occurs the night before. It seems like nearly every serious local runner I know has participated, yet Matt and I had never gotten around to it. When someone at work asked if I wanted to sign up for the 10-mile race as part of a group to get a discount, it gave us an extra boost to finally commit.

The race took place on Saturday, August 22nd and we lucked out with a beautiful day. It had been hot and humid in the days leading up to the race, so we were very fortunate to have a partly cloudy morning in the 60s.

Downtown Flint looked beautiful the morning of the race.

Because the race is so big and the roads close at least an hour before the start, I knew we needed to get there extra early. We left the house at 5:45 for the 45-minute drive to Flint. We were able to park in a huge lot on the campus of University of Michigan-Flint just after 6:30. Had we gotten there 10 minutes later, things could have been much more stressful. Even though the roads were still open and the lot had a ton of empty spaces, security blocked all of the entrances. I’m relieved that we got there when we did so we didn’t have to scramble like so many other people who had planned to use the parking lot.

We had plenty of time to kill, so we walked around a bit and took in the atmosphere. Matt went to the expo the day before to pick up our packets, but it was also open from 7-12 the day of the race. Bauman’s Running Store was there and I saw some good stuff, so we decided to stop by again after the race.

We scoped out the starting line while things were still quiet.

Matt and I got a picture on the famous bricks an hour before the start.

About 15 minutes before everyone else, members of the Crim 30-Year Club started the 10-mile race. Men and women who have completed 30 or more Crim 10-mile races are a part of the special club. Following their start, I jogged around for about half a mile to warm up before entering my corral. One thing I really loved about this race was the corral system. People were placed based on their estimated finish times, and separate waves were released every couple minutes. This was a great way to avoid congestion problems in a race with nearly 7,000 people. I would love to see more large races use this method.

Waiting in my corral.

The Twin Cities Marathon in October is my goal race right now, so I did not plan to race all-out. I purposely started easy and finished hard, but didn’t try to hit a specific pace. I hoped to average at least 7:45 per mile if I felt good, but I really just ran by feel.

I had heard that the whole city of Flint comes out to support this race. It was awesome to see so many people along the course and cheering in front of their houses. Aside from the official course entertainment (bands, cheer teams, etc.), I saw a woman bouncing on a mini trampoline, people with a beer stop, “Champagne Corner,” two little boys in superhero pajamas, Gumby handing out water, and much more. I enjoyed running by the University of Michigan-Flint’s campus, Kettering University, frat houses, and some really nice houses across from a golf course. I loved seeing the 30-year runners on the course. It was great to hear them receiving congratulations and so much encouragement from the other runners. Many of them had special things written on the backs of their shirts. I especially liked the guy with “Crim 35 year runner – slowing down at 86” on his shirt. There was always something to see along the course. It was a great environment that made the miles go by quickly. I don’t mind running races that don’t have spectators, but when the course support is there, I realize how much more fun it is.

The Bradley Hills, which come between miles five and six, receive a lot of attention. The race even sets up timing mats to identify the “king and queen” of the hills. The elevation map makes it look like the hills go on for nearly a mile.

There were a couple of decent climbs, but after so much hype, I was actually pleasantly surprised that they weren’t as bad as I thought they’d be. It seemed like the worst of it was over pretty quickly and didn’t really affect my pace. What I didn’t realize is that so much of the course would be rolling after that. I thought it would be pretty flat and a breeze through the end, but that was not the case. The rolling hills don’t seem to be apparent on the elevation map, but I sure felt them. Every time I thought I’d pick up the pace, it seemed like another gradual climb was ahead that would cause me to hold back. However, I try to tell myself that running downhill helps me more than running uphill hurts me, so it balanced out.

I still felt good as I got to the last couple miles, so I decided it was time to pick up the pace. After I rounded the last corner before the finish, I pushed as hard as I could for the final quarter mile. The brick road isn’t the easiest surface to finish on, so I was careful about my footing as I booked it to the end. 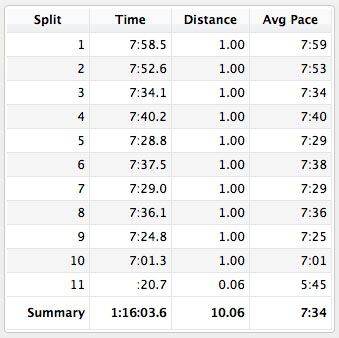 Right after the finish, we got our medals and walked by tents with water, chocolate milk, cereal bars, bananas, and popsicles. 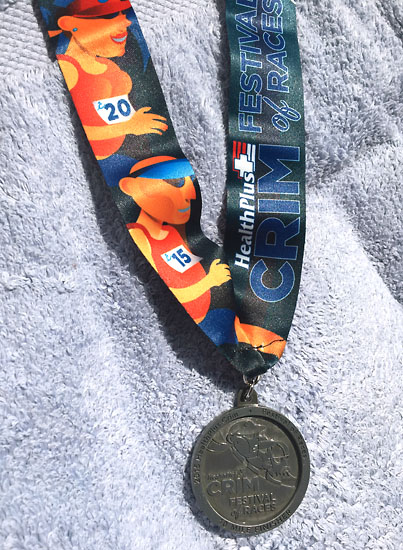 After the finish line.

The official post-race area had even more. We got some Timbits from Tim Hortons and some orange drink from McDonald’s. I also stopped for a picture with Ronald McDonald.

Our bibs had tickets for pizza and beer, so we got those next. Eventually we worked our way back to the MLive building for the Team Challenge after party. There was plenty of food there as well, and I ended up with some watermelon, a brownie, and some cookies. It was nice to have an air conditioned place to sit, and we didn’t even realize at first that they had a tent out back with a dance party! 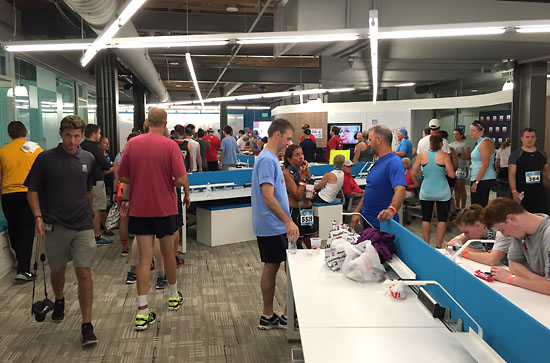 The Team Challenge after party.

A tent and dancing out back.

We hit the expo before we left, where I found a couple of fun shirts and got some shoes for $10 off.

A shirt from Bauman’s. 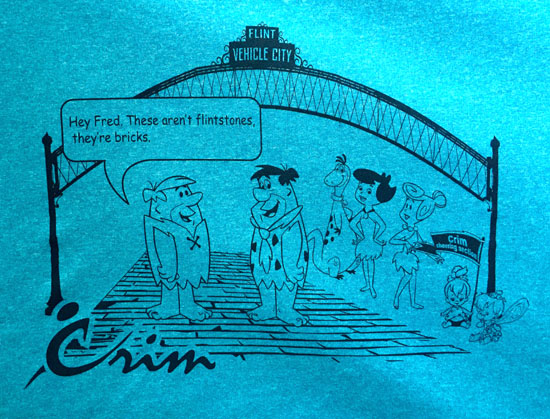 A cute Flintstones shirt that refers to the bricks at the start and finish of the race.

The women’s version of the official race shirt kind of reminds me of hospital scrubs.

Now that I’ve finally run the Crim, I understand why it’s such a big event. We had a great time and definitely hope to return in the future.

P.S. – A couple months after the race I received a Made in Michigan award for being a Michigan resident with a finish time in the top third of my age group among the nation’s 10-mile racers. It was awarded to around 1,000 runners from Michigan. I was able to pick it up at a local running store. I’m not sure it works as intended. I believe the race medal is supposed to fit inside, but it won’t stay there if the ribbon is attached. Even if I can’t really attach it to the medal, it’s still a pretty cool thing to have and it’s on display on a shelf.