On Saturday, April 18th, Matt and I went to Flushing, MI to run the Wake the Bear 5K. While browsing through races on RunMichigan.com, I came across this race. The idea behind the race is to wake the bear from hibernation after a long winter. My interest was sparked immediately when I saw an image of the bear. I hoped it would be featured on the race shirt, and luckily it was.

With the race featuring a bear like this, I couldn’t resist.

Although the bear got my attention, we also liked that the race would benefit the Bread for Life Organization, which feeds kids in the Flushing area. Plus, the website said the course would go through Flushing Park, running over bridges, through the woods, and along the river.

I had a 3-mile pace run on my training schedule for the day, so it was perfect timing. Our current goal race is the Glass City Half Marathon, the weekend after this race. That meant I really shouldn’t race this all-out. I knew I’d be tempted to run faster than the half marathon pace my schedule called for, so I hoped to settle somewhere in between – maybe around a 7:15 pace.

Flushing is northwest of Flint, and about an hour’s drive for us. With an 8:00 am start, we left the house just after 6:00 am…pretty rough on a Saturday morning! It was a beautiful morning though and the perfect day to race. It was sunny and around 50 degrees when the race started. The race started and finished at Holy Cross Lutheran Church, and they had a DJ playing music to keep us entertained while we waited. They also had a bear mascot, so of course I had to get a photo with him. 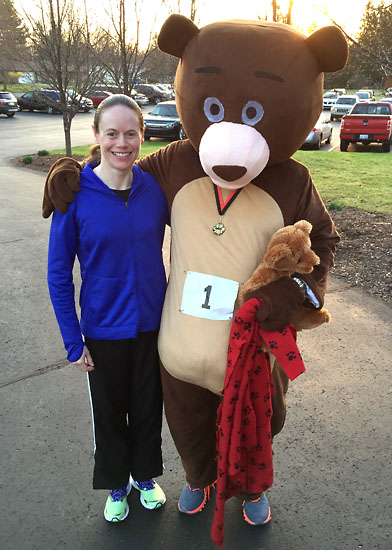 Matt and I ran an easy mile to warm up first. This race featured both a 5K and 10K, and the 10K runners started first. It was a fairly small group.

About 10 minutes later, the 5K started. First, we had to roar to “wake the bear,” haha. With a gun start, Matt and I started at the very front. As we took off, I tried to stay disciplined with my pace. Since I’m training for triathlon season right now too, I rode 17 miles on the bike the night before. Tired legs helped keep me from taking off too fast! The first mile felt pretty easy at a 7:22 pace, so I was okay with speeding up a bit more after that. We ran along neighborhood roads, and I kept wondering when we’d get to the park to see the bridges, woods, and river the website had mentioned. I realized later that only the 10K runners got to run through the park. I believe this race has only been a 10K in the past, and this was the first year for the 5K. Although I’m interested in seeing the park, the flat neighborhood course was good enough. I’m usually distracted by the pain of running fast during 5Ks anyway! I sped up to a 7:13 pace for the second mile, then pushed harder for the last mile. I was breathing pretty heavy by the end, which makes sense when I realized that I ran the last mile in 6:59. My finish time of 21:42 was good enough to place as the first woman and fifth overall! Matt had finished just before me and was second in his age group.

We both had the course a little short, with my Garmin saying I ran 3.02 rather than 3.1 With a 7:11 average pace, I ran just a bit faster than my 7:15 goal pace. We had a ton of great food to choose from after the race. I was just interested in the cookies, and ate enough of those to negate any calories I burned in the race! 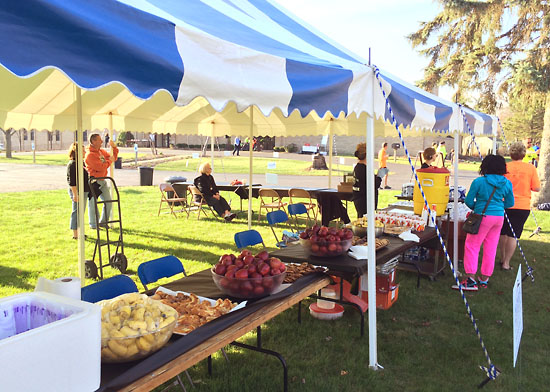 Since Matt and I had done so well, we stuck around for the awards. We waited at least an hour before the awards ceremony began. I was excited to place as the first female, but more excited that the bear was featured on the award that I received. I was glad that it was featured on Matt’s medal as well. 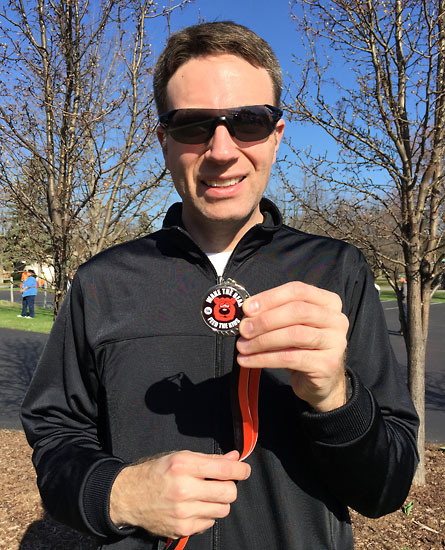 Matt and his age group award. 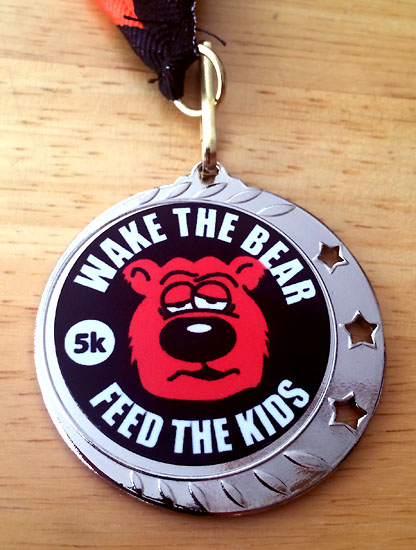 A closer look at Matt’s medal.

It was a fun race and obviously a pretty solid one for both of us!