I am happy to report that the Glass City Half Marathon, my goal race for the spring, was everything I had hoped for. The weather was great for running, the course was scenic, and I hit my goal of running sub-1:40 for a new PR!

Matt and I looked at a number of races before deciding to run Glass City in Toledo, Ohio. Ultimately, I liked that it was somewhat close to home, the flat course would allow me to push for a new PR, and it fell fairly early in the spring – April 26th. I wanted to get a half marathon in early so I could really concentrate on triathlon training a bit more before that season begins. In addition, our friend Jeff had great things to say in his recap at DetroitRunner.com when he ran the race a few years ago, so I was sold.

Toledo is an hour and a half south of us, so we decided to drive down the day before and stay overnight so we could hit the expo. Plus, leaving the house at 4:30am on race day did not sound appealing! The race begins and ends on the campus of the University of Toledo. The expo took place in Savage Hall Arena and had plenty of exhibitors to browse through. I always enjoy a good expo, and Matt and I found some nice cotton t-shirts sold by Dave’s Running.

Shirts from Dave’s Running at the expo.

Shirts we bought at the expo. 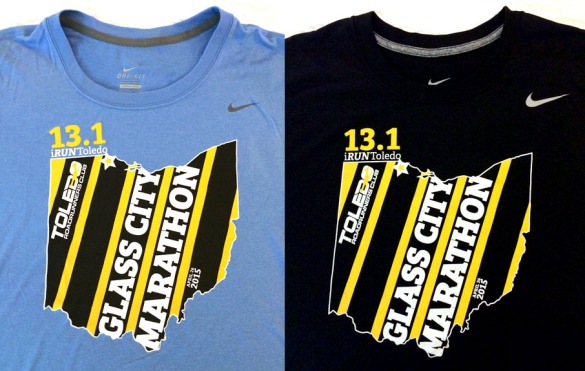 The official race shirts. Different cuts and colors for men and women.

We’ve found that Buffalo Wild Wings usually works for us the night before a race, so we hit one for an early dinner then headed to our hotel. The weather was going to be a bit cool compared to recent temperatures, so we agonized over what to wear the next morning. We watched a Red Wings game then went to bed early, but neither of us got the greatest sleep. I think I woke up pretty much every hour. Luckily, I felt fine in the morning.

Our hotel was 15 minutes from the campus, which meant leaving before 6am for a 7am start. We aimed to park in the same lot we used for the expo, but the traffic backup was ridiculous. I’m glad we brought a map with the parking options so we could go to plan B. After a short walk from the parking lot, we stopped so Matt could get a picture with the Pink Panther, mascot of sponsor Owens Corning.

Matt with the Pink Panther.

It was a beautiful, clear morning, but it was cold. It was 37 degrees at the start, which was actually great for running, but a bit cool for standing around. We were able to stay warm in the arena, and they opened the upstairs area that had a bunch of bathrooms. I realized we didn’t have much extra time and rushed down to the gear check, then got in a quick jog around the parking lot to warm up. By the time we got to the corral, it was so packed that we couldn’t get in. The marathon had somewhere around 1,000 people and the half marathon had just under 3,000, with everyone starting at once. We found the opening to the “B” corral, which is where we belonged, then hung out by the gate to get in.

As we were about to start, people bunched together more and we were able to get in the corral. Just after 7am, we were off! It took about a minute for us to cross the starting line. I had trained for a 7:35 pace, and figured I’d aim for a 7:50 pace for the first mile. That did not happen. It was SO congested at the start. I tried to weave around people at the edge of the street, but it was too crowded. I kind of freaked out when I realized I was at a 9:00 pace half a mile into the race! I was able to get around some people enough to drop my pace to 8:11 for the first mile. Not exactly what I had planned, so I’d have to make up for it throughout the race. It thinned out enough after that for me to run a little more comfortably. The first six miles or so took us through some beautiful neighborhoods. The streets were lined with trees and the houses were really nice.

A view from Google Maps that shows what some of the route looked like.

Aside from some fairly insignificant hills through the neighborhoods, it was all paved, flat, and fast. Spectators were scattered throughout the course, and I especially enjoyed seeing a couple of bulldogs with awesome underbites, and a couple of little superheroes next to an adult dressed as Gumby. A short portion of the race took us through Wildwood Metropark, which connected us to the University Parks bike trail about eight miles into the race. It was around that time when the half marathoners broke off from the marathoners. That’s also when I decided to pick up the pace. I was averaging somewhere around 7:38 pace and knew I needed to step it up a little bit if I wanted to hit my goal. I ate a few Honey Stinger Chews around the 5th and 10th miles to fuel, and a hydration belt with a 21 oz. bottle of GU Brew kept me from stopping at aid stations. I ran the 9th mile in 7:31 and stayed at or below that pace for the rest of the race. I think a little hill slowed me down a bit in the 12th mile and I worried that slight stomach cramping could become an issue as I dropped my pace, but luckily it faded. Somehow I dropped to 5K pace by the last mile! I guess that helped make up for the slow start.

One of the perks of this race was a finish in the Glass Bowl Stadium. After running 13 miles on the pavement, it was kind of a shock to hit the stadium’s turf. I was so distracted by thinking about the lack of traction and trying to sprint to the finish that I didn’t pay much attention to my surroundings at that point. I finished in 1:39:43, which was good for a new PR by a minute, and I hit my goal of running sub-1:40!

Here are my Garmin splits: 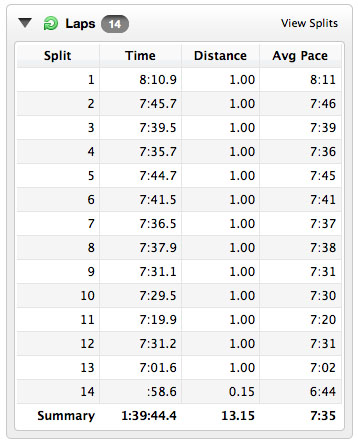 I think it’s pretty interesting that even though my pace fluctuated throughout the run, I actually managed to hit the 7:35 goal pace I’d been aiming for. That made me especially happy! I’ve found that it’s a great feeling to have enough gas left in the tank to really pick it up at the end and finish strong. It took me a few minutes to catch my breath after I finished, then I looked at the Find My Friends app on my phone to see how Matt was doing. Training hadn’t gone as planned for him, so the race was kind of like a long training run for him. I managed to catch a shot of him flying along right before the finish line.

We got our medals and spent a bit of time taking in the atmosphere of the stadium. 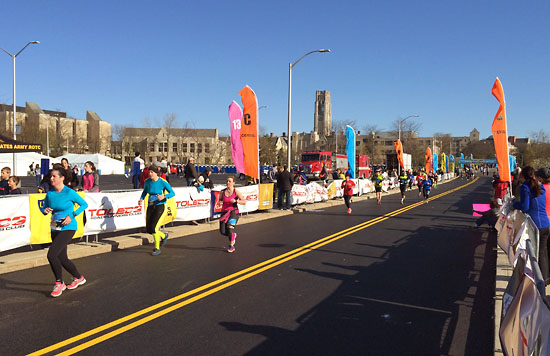 The final stretch before the stadium finish.

A photo together after the race.

Since it was a bit cool out, we went to the gear check to get our stuff before checking out the food. We realized we had to backtrack to get our finisher’s mugs. 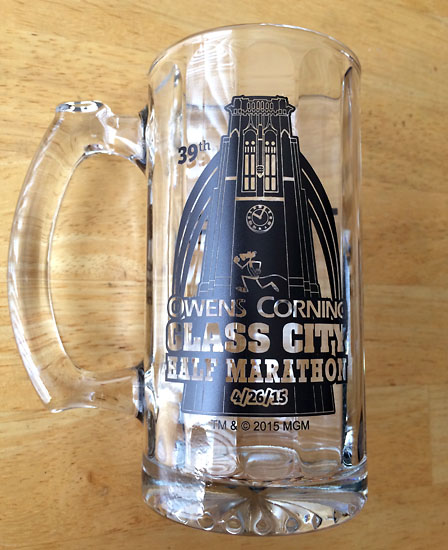 A glass mug to go along with “Glass City.”

After walking around the stadium, watching finishers, and going to gear check, the food line had grown pretty long. It was worth the wait though – they had pizza, breadsticks, cinnamon bread, pretzels, Twizzlers, cookies, and other stuff. Once we made it through that line we waited for a while in the beer line. Each bib came with two free beer tickets. It seemed kind of funny to have all that food and the beer around 9am, but I was okay with it!

We ran into our friend Alexis who had to drop from the full marathon (see her blog about it here), so she and her friend Karly had walked the 5K. It was nice to see them and catch up even though things hadn’t gone as they planned. After chatting for a bit, we made the trek home.

This was a great experience all around. I’m especially thrilled that everything came together and I nailed my goal. Hal Higdon’s Advanced training program worked wonders for me once again. I stuck to the plan for the most part, but opted to run five days per week instead of six. On either Mondays or Wednesdays, I dropped the short, easy run and rode the bike or rested instead. Fridays were supposed to be rest days, but that’s usually when I did a long bike ride. I also added a swim most Saturday mornings before my runs. I did two 14-mile runs, and my weekly mileage maxed out at 37 miles two weeks before the race. I will probably continue to use Higdon’s plans in the future because they’ve worked so well for me.

Up next – back to triathlon training while also concentrating on 10K speed for a race in late June. Marathon training starts up in June as well, so it’s going to be a busy summer!