I’ve never considered myself to be much of a cyclist but maybe I should rethink that now that I’ve completed a 100-mile ride. I typically think of myself as a runner who bikes sometimes. I use the bike to cross-train and so I can stay fit enough to survive the bike leg of triathlons where I really just want to swim and run. When I have a running injury I bike so I can get some kind of exercise. I still don’t use bike shoes, I don’t understand any of the mechanical aspects, and people at triathlons always tell me I’d be better off with a nicer bike. I’m pretty clueless as a cyclist, but as long as I can keep moving and cover the distance I guess that counts for something.

My plan for this year was to get into ultra running, not ultra cycling. A suspected peroneal tendon injury (combined with the pandemic) changed all of my plans for the year. Several months without running followed by a very gradual rebuilding process caused me to turn to the bike. In order to feel like I was accomplishing enough, I went all-in on the biking.

I’ve learned that I have a need to constantly feel like I’m achieving something. I have taken the StrengthsFinder assessment (now called CliftonStrengths) a couple times through work. I just took it for the second time in May so its findings are fresh in my mind. Although it can be applied to my work habits, it also helps explain why I keep working toward various athletic goals. Achiever is one of my top strengths and according to the assessment, I feel like I have to achieve something every day in order to feel good about myself. Once I feel satisfied with one achievement an internal fire pushes me to do more. Maximizer is another one of my strengths. That theme deals with taking a strength and nurturing it, refining it, and stretching it toward excellence. The combination of the Achiever and Maximizer strengths explains a lot of my motivation and my tendency to keep pushing myself.

I started to rack up a bunch of 50-mile rides this summer. I rode 60 miles one weekend then bumped up to 62 miles another weekend so I could hit the landmark of completing a metric century ride. When I posted about that ride on Instagram a friend asked if I had considered riding 100 miles. Another friend said he was sure I could do it. The thought hadn’t entered my mind until they mentioned it. Once they got me thinking about it, it seemed like a challenge I ought to consider. I went up to 70 miles a couple weeks later.

The weather seemed perfect this past Sunday, August 30th. It was clear, around 60° to start, and it would only climb into the mid-70s later in the day. I hadn’t decided if I would aim for 100 miles but thought that I might try.

Knowing that it could be a long day, I started my ride at 7:30am. I drove to a parking lot along the Macomb Orchard Trail and rode less than a mile to get to Stony Creek Metropark. Although there is a paved 6-mile loop, cyclists who go faster than the recommended speed limit of 10 mph typically ride on the road. It’s the only place where I feel comfortable doing so. By including a stretch of road that goes up to the nature center, it’s possible to get a loop that’s just over nine miles long.

There are some sections that climb just enough to make me feel like I’m crawling. The nature center stretch makes things challenging. In addition to pushing up the hills it seemed like I was riding into the wind for the most challenging stretches. Stony is a good spot for a tough workout so I sure didn’t make things easy for myself. I added a couple of detours down a few drives to add a little extra distance and managed to complete just over 50 miles after five loops.

The elevation chart for one time around the 9-mile loop I rode at Stony. I think it feels worse than it looks!

I didn’t feel the need to keep riding non-stop. I always try to enjoy the scenery and like to take photos along the way. 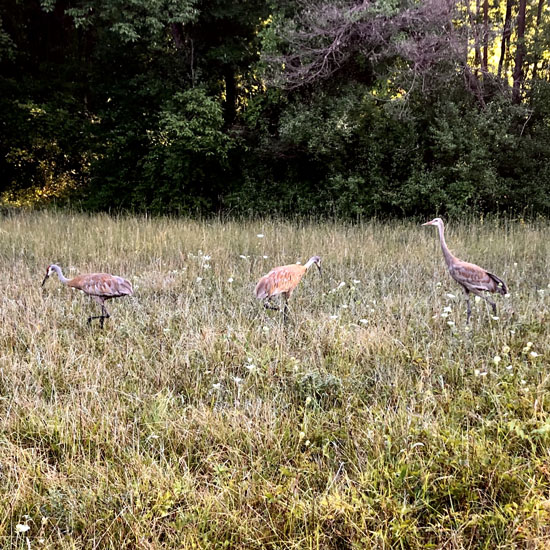 Food stops were another good way to break things up. I ate a Picky Bar for breakfast that morning and had another when I took my first break after a couple hours. I’m thankful that they work so well for me and that I didn’t have any issues with my stomach throughout the whole day. I thought I better take advantage of a real bathroom where I could wash my hands while I was still at Stony. I was hoping I could avoid using the outhouses along Macomb Orchard Trail, especially during these COVID-wary times.

After leaving Stony I rode a short stretch of Macomb Orchard Trail to add some distance before stopping at my car. I ate another Picky Bar and swapped a couple of water bottles.

What I needed to fuel me through 100 miles

The second half of my ride was on Macomb Orchard Trail. It’s flat and smooth which was a nice break after the hard workout at Stony. I made sure I rode 56 miles by that point so I could go out 22 miles to the end of the trail then back without having to add on at the end. I knew I would want to be done and not play around with adding extra distance!

I hit some wind as I headed north but knew eventually the trail would veer east so I tried to look forward to that. Between the wind and working my legs so much at Stony I didn’t have expectations for my speed. Although it would have been nice to hit at least 16 mph like I have for recent rides, I seemed to be stuck at an average of 15.5 mph. This goal was more about distance than speed though.

I’ve spent so much time on Macomb Orchard Trail this summer that I knew where I would aim to stop for food breaks and counted down the distance until I’d get there. I rode 15 more miles before a stop to eat a few Clif Bloks in Armada where I admired a sunflower. 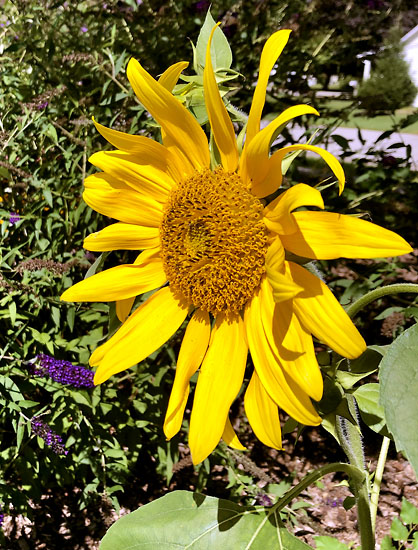 A sunflower in the April Millsap Memorial Garden.

The trail ends in Richmond which is about seven miles from my stop in Armada. I had yet another Picky Bar and knew that I would “only” have about an hour and a half left. Somehow I was still okay! Although seat discomfort can be an issue for me, I lucked out and had a good day where it didn’t bother me too much. 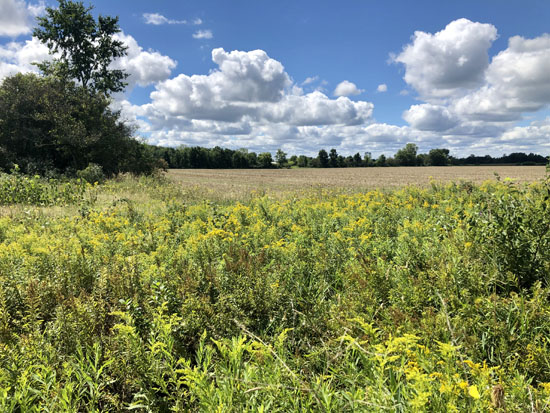 On the way out I laughed at an ear of corn that was in the middle of the trail. That’s not something I expect to see discarded on a trail. The trail literally passes through corn fields so it makes sense though. On the way back I made a point of stopping to take a picture.

I continued for 12 more miles and stopped at a park in Romeo to eat my final Picky Bar. I really looked forward to those stops. Then I only had 10 miles to go! At the end I only had to loop through the parking lot one time to get to an even 100 miles, so I did a pretty good job at getting the distance right. After 6.5 hours of riding I was done! 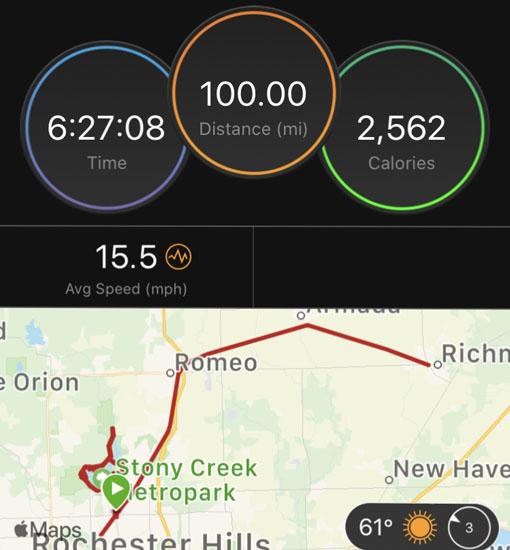 During the ride I thought about how an Ironman bike segment is 112 miles. I was still 12 miles shy of that, not to mention adding in 2.4 miles of swimming plus a marathon. As crazy as my ride seemed, it still doesn’t scratch the surface of that! I’ve always said that I haven’t been interested in trying an Ironman because I wouldn’t want to sit on the bike that long. I still don’t have ambitions to try an Ironman (yet…) but I feel more secure with the idea of trying the half-Iron distance. It’s something I’ve thought about for a few years and maybe I should try that next year.

Surprisingly, I didn’t feel too bad when I finished. Since I parked near Dairy Queen I had to stop there for an Oreo Fudge Blizzard.

This DQ Blizzard was amazing after my ride

I got a pizza soon after that. I had plenty of calories to replenish and I deserved some treats after such a big adventure!

In general, my legs didn’t feel too bad. After showering I felt really warm so I wrapped an ice pack around my neck to cool down. Later that night and into the next day my head bothered me a bit. I tried to stay hydrated but probably needed to drink more. I probably didn’t get enough sleep either. I didn’t feel too beat-up otherwise. Running a marathon for 3.5 hours wrecks me a whole lot more than 6.5 hours on the bike.

I may not run an ultramarathon this year and I didn’t get to race any triathlons, but I found a way to adapt and still fulfill that need for achievement. It’s especially meaningful since I don’t consider myself a very strong cyclist. I proved that I’m capable of more than I thought and that maybe some of those other aspirations that used to seem crazy aren’t so out of reach. Now that I’ve accomplished one big feat for the summer, I’ll have to see what the achiever in me decides to strive for next.