April 15th is approaching quickly and the excitement is building. It’s hard to believe that a month from now I plan to run the Boston Marathon for my first time. You would think that like most runners, as soon as I qualified I would have immediately jumped at the chance to go to Boston. For some reason it took me a little more time to come around.

Initially, Boston was never really a goal for me. I wasn’t much of an athlete as a kid. I dabbled in softball, basketball, volleyball, and soccer, but I didn’t last more than two or three years in any of them because I wasn’t very good. I stuck with swimming the longest, but still…I was average at best and eventually I didn’t see any purpose in continuing to swim competitively. I ran my first 5K ever at the age of 30 and my first marathon came a few years later. Luckily maturity taught me not to worry about whether I was competitive or not. Running made me feel strong and empowered and that’s all that mattered to me. It was a bonus when I discovered I was actually kind of good at it. Far from elite, but pretty decent for an average person. When I realized I was close to achieving a Boston-qualifying time, I figured it was a good goal to aim for. I didn’t really picture myself going to Boston though.

Easily overwhelmed by logistics and little details, I’ve spent too much of my life coming up with excuses not to do things. When I had the opportunity to go to China in high school, I nearly missed the chance. I wasn’t sure I wanted to go and had plenty of excuses. I didn’t know how I’d cope with the food as a picky eater, I wasn’t comfortable with the idea of staying with a strange family for part of the trip, and most of all, it would cost a ton of money. Thankfully my parents were supportive, I was talked into it at the last minute, and of course it was an incredible experience. I’m not sure if I’ll ever get back to China, so I’m extremely thankful that I ended up going.

I did the same kind of thing when I first qualified for Boston – the excuses started rolling. The trip would cost a ton of money between the flights and outrageously-priced hotel rooms. I’d have to sit around in Athletes’ Village for hours waiting for the start of the race. It could be cold and the field could be a mud pit. The weather has varied from pouring rain and crazy winds to super hot. I had so many excuses.

I ended up getting a stress fracture so I couldn’t have run Boston following my first qualification anyway. I still aimed for another BQ in case I changed my mind. Eventually I pushed my stubbornness and excuses aside. I got over my hang ups and realized OF COURSE I should want to run Boston. I recognized what an honor it is that I even have the opportunity to go to Boston. There’s a reason everyone raves about the race and works so hard to try to get there. I needed to quit worrying about logistics, suck it up, and just go for it. I often struggle to push my stubbornness aside, but I’m working on it. I’m trying to recognize that I need to get out of my comfort zone. One way or another I’ll adapt and everything will be fine. Obviously tons of other people deal with the inconveniences so surely I can too. Running constantly pushes me to my limits and it’s extremely rewarding. I need to remind myself to get outside of my comfort zone when it comes to life in general so I don’t miss out on great opportunities.

I’ve tried to tackle all of my excuses about the race and put a positive spin on everything. Luckily Matt understands what a big deal this race is and has been very encouraging. It costs a fortune to stay in the heart of downtown for the race, but I know it will make the experience even more enjoyable. Who knows – this might be the one time I run the race so I may as well take in the full experience. I stashed money away for the hotel shortly after signing up for it last spring. That money is spoken for and I don’t have to worry about it. We booked the flights and even had enough miles saved up to cover it. We got tickets for a game at Fenway Park. I signed up for a special coach bus from a local running store that allows people to arrive at Athletes’ Village in comfort and style. Instead of taking the school bus shuttles and getting dropped off, I can choose to stay on the bus. That’s very reassuring in case the weather is bad or if I don’t want to sit around in a field. Bit by bit I’ve been chipping away at all of the logistics. It’s all coming together and I’m getting really excited.

Aside from all of the planning, of course there’s that whole aspect of having to train for the actual race through the winter in Michigan. At least this is one area where I don’t come up with excuses. I’m going to run year-round one way or another and it’s just a matter of how I’ll make it happen. I managed to train through the winter for the Glass City Marathon last year and knew I could do it again. Last winter I developed a problem spot around my left hip/groin that may have stemmed from too much treadmill time. The area gets tweaked if I push beyond 3-4 miles on the treadmill, so somehow I’d have to survive this winter without much help from the treadmill. Because Matt works at Oakland University, I was able to sign up for a semester-long membership at the rec center where there’s an indoor track. It’s 1/10th of a mile which is not ideal for long distances due to harsh turns around the corners. It’s still a great alternative to the treadmill and it doesn’t tweak my problem spot. When the weather has been ridiculously cold or there has been snow/ice/slush outside, it’s been a lifesaver.

Other than short runs around the indoor track, I’ve spent most of the winter running around Oakland University’s campus or the local metroparks. OU keeps the sidewalks clear and salted for the students, so it’s one great option during the winter.

In addition to the clear sidewalks, Oakland University is great for winter evening runs because the campus is well-lit

During the occasional thaw I’ve been able to run from home, but the conditions of the local sidewalks are usually too questionable for my taste. I know the metroparks plow and salt the paths and I don’t have to worry about wiping out. It’s become routine for me to go to Stony Creek Metropark straight from work for evening runs. I’m very fortunate that it’s only 10-15 minutes from home and I’ve spent most weekends there as well. Kensington and Indian Springs are great parks as well, but they are around 45+ minutes away so I only use them on weekends when I’m willing to make the drive.

Running at Stony is enjoyable with this kind of scenery

Looking back, somehow I’ve managed to survive what I hope has been the worst of the winter. When the “polar vortex” rolled through with ice and sub-zero temperatures I had to tweak my plans a bit. Oakland University’s campus closed due to the weather at one point so I couldn’t use the indoor track. The weather made conditions unsafe for running outside so I decided it was best to skip a run. I missed a couple runs when I battled some sinus issues, and every now and then I’ve developed a tweaky ankle or something that tells me I should take a day or two off. I’ve accepted that missing a run here or there won’t make or break my whole training cycle. I have been brave enough to battle ridiculous temperatures a few times this winter, and it’s doable as long as I dress appropriately. However, whenever I have to breathe through a mask, I don’t find it especially enjoyable. 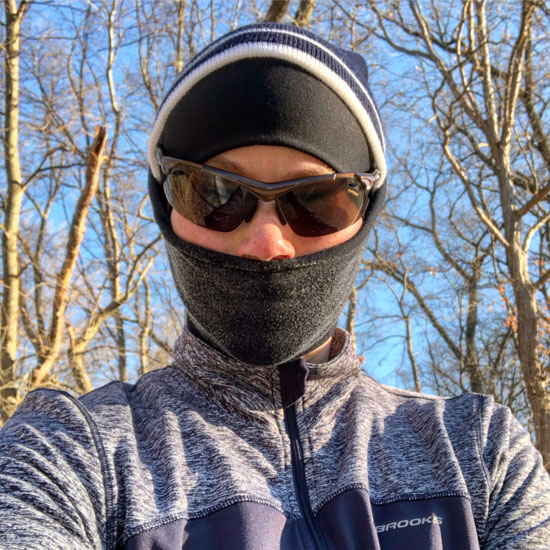 I only have four weeks left in my 12-week training plan – Hal Higdon’s “Boston Bound” plan. I have followed his training plans in the past and they have served me well. This plan appealed to me because it specifically prepares for the hills of Boston. Most plans concentrate on speed work and marathon pace, but on top of that, Higdon also works in hill repeats. I’m used to following 18-week marathon training plans, so this was a bit different. It assumes that you already have a high level of fitness prior to the start of training. I was basically in training mode weeks earlier because I had to be ready to run 12-14 miles for a long run as soon as the official plan started.

Things have gone relatively smoothly and I just have to keep it up for one more month. I ran 18 miles for my long run a couple weeks ago and will go up to 20 this weekend. I’ll run a half marathon race next weekend that will test my fitness level and hopefully help reassure me that I’m good to go. Another 20-miler comes the following week, then the race will be here in no time.

I wavered about it quite a bit, but I even gave in and bought the official celebration jacket, seen at the beginning of this post. I wasn’t sure I really HAD to have it, especially for the price, but a 20% discount and my building excitement finally made me to go for it. I’m all-in at this point and can’t wait for the big day.