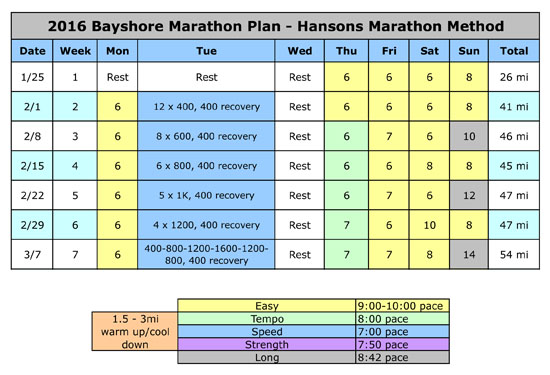 Now that I’ve completed the first seven weeks of training for the Bayshore Marathon, I figured it was time to write an update. It’s my first time following the Hansons Marathon Method and so far so good. I have followed the schedule 100% so far, though my weekly mileage sometimes comes in a mile or two short of what’s listed above if I skimp on the cool down following speed or tempo runs.

One of the major differences in following the Hansons plan is the lack of short runs. Six miles is my shortest run until the week before the race. With Higdon’s plan, I was used to plenty of three and four mile runs. Another difference is that Higdon makes Friday the rest day while Wednesday is off for Hansons. I was a bit wary of running six or seven miles on Friday nights followed by six to ten miles the following morning. It hasn’t been a problem though and I’m sure keeping my pace easy is a critical part of that. Three or four days a week I’m supposed to run slow and easy – 9:00-10:00 pace for me. Sometimes I have to work to slow myself down because I naturally feel like going faster. I’m usually right on the edge of that 9:00 pace. The treadmill has been especially helpful when it comes to slowing down. After all, I can only go as fast as the pace I select! I think being disciplined about it keeps me from getting injured.

I’ve felt great aside from pain in my left heel that popped up at the beginning of the year (while I was still building a base before training began.) All of the symptoms suggest it’s probably plantar fasciitis. Luckily it doesn’t bother me much while I run, but it can be painful first thing in the morning and at moments during the day. I’m reading up on it and hoping to keep it from getting worse, but it hasn’t gotten any better.

I’ve spent a lot of time on the treadmill the last couple months. It’s been a savior when it comes to my Tuesday speed workouts. The track is the ideal place for me to run repeats at 5K pace, but when it’s super cold during the winter and the track is covered with snow, it’s not really an option. The treadmill can feel like the easy way out because I don’t have to look at my watch to make sure I stick to my pace. I select the pace on the treadmill and it’s just a matter of hanging on!

Week 6’s 4×1200 workout was the first one that nearly broke me. Somehow I made it through, but it was brutal by the end. This past week I finally got out on the track for the first time in months. The 400-800-1200-1600-1200-800-400 ladder workout was another tough one. The last 1200 and 800 were especially nasty, but I still managed. I really hated 5K pace by the end of that workout. I only have three more weeks of workouts at 5K pace, and I’m definitely looking forward to the more endurance-oriented strength workouts that are ten seconds below marathon pace.

A photo Matt took of me on the track last Tuesday.

Though it sure hurt struggling through the ladder workout, I was thankful I had this pretty view to distract me.

I’ve spent a good amount of time on the treadmill this winter, but I do get outside plenty too. I’m thankful for Stony Creek Metropark because the 6-mile path is always cleared. 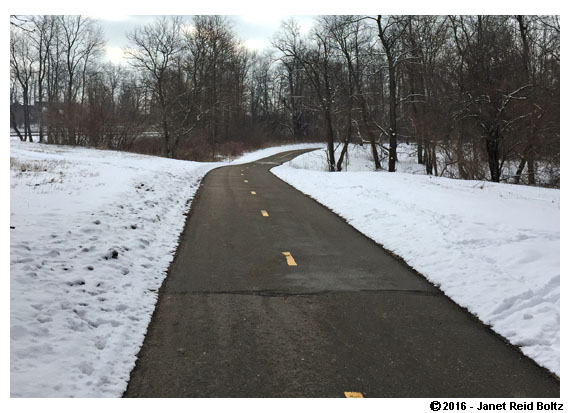 A pretty view at Stony.

This winter actually hasn’t been too bad. When we’ve gotten snow, sometimes we’ve been lucky enough to have it melt a few days later. I’ve been able to get out on the dirt roads several times without worrying about icy patches. The dirt roads are scenic, peaceful, and a nice change from pounding the pavement.

Sights from a run in Oakland Township.

We’ve had a number of spring-like days recently which can make for some beautiful scenery. Getting out to explore is one of my favorite parts of marathon training. Here are a few shots from recent runs. 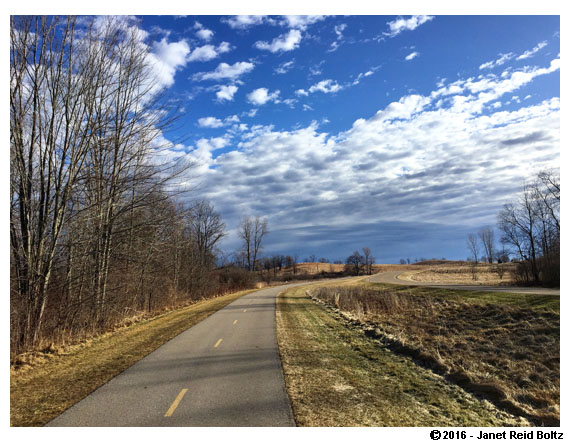 It was an awesome day at Indian Springs.

Sometimes it feels like I’m in a fairy tale when I explore Stony Creek Metropark’s trails.

A peaceful run through the woods at Stony Creek.

I’ve had some really nice evening runs where I get to watch the sun set, but I’m excited to finish my runs in the daylight now that we’ve “sprung forward.” 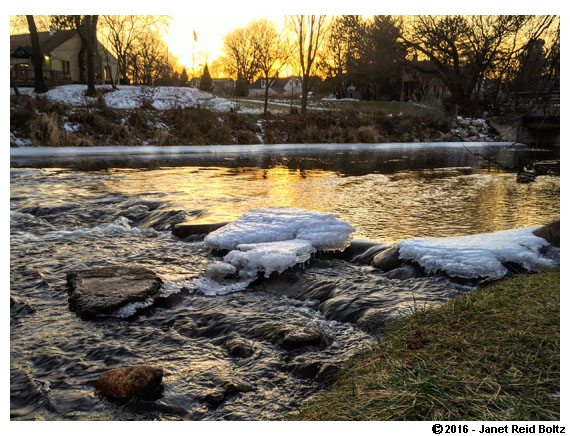 A nice view at the end of a marathon pace run around Stony.

I’m going all-in with this Hansons plan and I’m curious to see what it does for me. I’m not doing any triathlon training at this point. I still hope to participate in some triathlons this summer, but it may be more for fun rather than really pushing myself. I make sure to get to the gym for a weights session once or twice a week, but otherwise it’s all about running right now. The first seven weeks of training have been successful, and I hope the same goes for the next 11 weeks.