June 5th was National Running Day, and Matt and I were BOTH lucky enough to win free shoes from Merrell. On Twitter, they asked people to share how many miles they had run and gave shoes to 5 random responders. All we had to do was tweet and they gave us this awesome prize. What an awesome company. They surprised Matt by sending a pair of Mix Master Tuff shoes. We both have a different model of lightweight Mix Master trail shoes and love them. The Tuff model is a little bit heavier and more rugged. Instead of sending shoes to me, Merrell sent a certificate that allowed me to chose what I wanted. After seeing Matt’s shoes, I decided I wanted to try a pair as well. Merrell doesn’t make the Tuff for women though, so luckily they run just small enough in men’s sizes for me to order a pair. They came yesterday and I was anxious to go for a run to try them out. 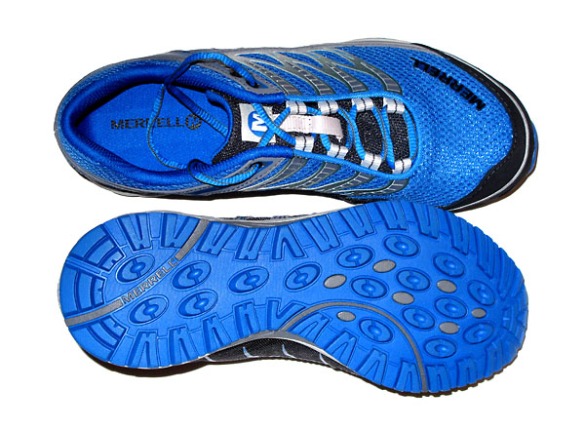 The lugs on the bottom make them good for trails

I decided to try them this morning for an 8-mile run on the Polly Ann Trail. We had never been to the trail before but had talked about trying this rail-to-trail for a while. We started around Lake Orion and ran up to Oxford. The first 1.5 miles had the kind of surface we expected – small, crushed stones and dirt, which is similar to the surface of the Paint Creek Trail.

There was a stretch of about 1.75 miles that was paved, and these shoes did well on both surfaces. It rained throughout our whole run and the shoes were comfortable the whole time. I am always excited to try new shoes and I’m glad these seem to be a good addition to my collection. Now I just need to get out on the “real” trails to try them out.

In addition to new shoes, I also got a new bike last week. After doing two triathlons, I knew it was time to try something aside from my Schwinn mountain bike. It’s certainly not ideal for road racing. I don’t know much about bikes and wasn’t sure where to start. We went to a couple bike shops and I realized I didn’t feel comfortable on a road bike. The bike that felt the most comfortable for me is categorized as a “fitness” bike. It’s a Trek FX bike that has flat handlebars like I’m used to, but it has much thinner tires than my mountain bike and is good on the road.

I’ve been a bit too busy this past week to give it a try, but I’m pretty excited about it. Hopefully I will notice quite an improvement in speed and I’ll feel like a speed demon the next time I race, haha.