Another successful week of training done. Here’s what last week looked like:

Monday: Ran 3 easy miles in the morning, biked 7.36 in the afternoon.

I enjoy running in the morning on the weekends, but when I have to work, it’s usually not much of an option. I get up ridiculously early as it is, so throwing a run into the mix is usually not an option. The weather has been so hot lately that I decided to give it a try one morning. Since it wouldn’t really be safe to go out on my own in the dark, I was lucky that Matt was willing to go with me. It was still super humid and warm even that early, but not as bad as it would have been in the afternoon. It was nice and peaceful, and basically the only other people out at that time were newspaper delivery people. I probably won’t be doing this often, but it was a nice change to the routine.

In the afternoon, I really wanted to get out on my bike. Conveniently, a storm rolled in right as we were ready to go. It started to rain steadily and there was thunder, but no lightning. We figured we’d at least try a mile or two and see how it went. We headed out to the trail with our old mountain bikes. That was a good decision considering how the rain pooled up along the sides and it was pretty messy out there. At least the rain cooled us down. It was actually kind of fun splashing around in the rain, and there were a few other crazy people out besides us. It was all fun until we got home and had to clean the splattered mud off of everything!

Tuesday: 40 minutes of strength training followed by 6.5 miles on the treadmill. It was another hot day and I had a tempo run on the schedule. I knew I would not successfully pull off a tempo pace when the heat index was 100 degrees, so I opted to run on the treadmill. For the middle 4.5 miles, I sped up my pace each half mile from 8:20 down to 7:30. This was actually a really good treadmill run because I felt stronger and more comfortable as I sped up.

Wednesday: Swam 2,000 meters followed by 3 miles on the treadmill. It had been over 2 weeks since my last swim and I was happy to finally get this in. It was still ridiculously hot outside and it was so refreshing to get into the pool. I swam 1,600 meters of free, then 400 meters of breast. I headed to the treadmill afterwards to get 3 easy miles in.

Thursday: 25 minutes of strength training followed by 7 easy miles on the treadmill. Yet another treadmill run. I can handle a few miles outside when it’s really hot, but 7 miles would have been ugly. My car said it was 100 degrees, so the treadmill seemed less torturous than running outside. I survived, but 3 days in a row was pushing my treadmill threshold.

Saturday: Ran 7 easy miles on the trails with Matt, followed by a little over 12 miles on the bike. We ran down the Paint Creek Trail to the Clinton River Trail, and it was finally a little bit cooler.

A pretty day on the Clinton River Trail 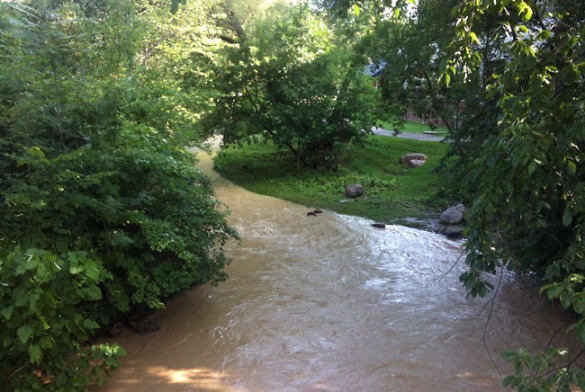 The river was muddy and overflowing after storms the night before

After our run, we drove our bikes to the Macomb Orchard Trail, which is flat and paved. It made for a good, fast ride, but we kept it easy since I had 14 miles to run the next day. Matt had a few close calls with a couple rabbits and a raccoon that ran out in front of him! Since we were parked right by a Dairy Queen, of course we had to get treats afterwards.

Sunday: Ran 14 miles. The weather finally cooled down to the 60’s for this run – what a relief! It went much, much better than my hot 13 miles last weekend. The heat really gets to me. I decided to run much of the Brooksie Way course for this run. I started on the Paint Creek Trail for a mile, then jumped right into the hilliest portion of the route. It helped keep my pace in check early on, and getting the hills out of the way early made the rest of the run seem easier. I was about 20 seconds slower than marathon pace, and still felt strong at the end. I didn’t crash or hurt later in the day either, so I was really happy with this run.

Aside from potential storms a day or two, the weather looks much more promising this coming week. Hopefully I won’t be on the treadmill so much. I did decide to sign up for another triathlon next weekend in Clarkston. Every third week of my training plan backs off on the mileage, and next week is one of those weeks. 10 miles is my long run, so I’m hoping I can shuffle things around enough to fit that in mid-week and race on the weekend. As marathon training gets tougher, I may not be looking to do many (or any?) more triathlons this season. I’m looking forward to trying another with a longer open water swim and my new bike.

One thought on “Week 5 of marathon training”