Week 10 is done! Now it’s just 2 months until the Grand Rapids Marathon. So far, so good. I’m still getting my runs in and feeling pretty good about how things are going. Here’s what training involved this week:

Monday: 40 minutes of strength at the gym followed by a 9-mile run. After I got home from the gym, Matt and I headed out for 9 miles. His birthday was on Tuesday, when I had 9 miles on the schedule. I didn’t want to be off running half that night. Instead, I swapped the days of some of my runs. I’d usually do 3 on Monday following my weekend long run. I ran a hard 13 miles last Saturday and took Sunday off. One day was not enough time off for me to turn around and run 9 miles after that kind of effort. This was the ugliest run I’ve had in a long time. I thought I was actually feeling pretty good after the 13 miles, and my legs were fine during the day. Once I started to run, it was a different story. A recovery run of 3 miles would have been ideal, but I was determined to get in 9. By the end, it felt like I was crawling and nearly every muscle in my legs hurt. Somehow I survived, and it definitely helped that Matt was there.

Tuesday: Ran 4 miles. I’d normally run 4 miles on Wednesday, but chose to do it today. I was able to get these miles in pretty quickly so we could have fun for Matt’s birthday afterwards. After the previous day’s brutal run, I didn’t know what to expect. I started really slow, but must have loosened up, gotten faster throughout and finished strong.

Wednesday: Rest. I did not plan on taking this day off. I was going to get up and run 3 miles (Monday’s usual amount) in the morning. I decided it would be better for me to get more sleep since we’d be out late at a Tigers game that night. However, I couldn’t fall back asleep anyway. It figures. That meant I’d not only be tired from getting up way too early, but I didn’t get the run in either. There was no time before the game, so this run would just have to be skipped. I decided missing 3 miles would not really be a big deal and that I should quit worrying about it.

Thursday: Ran 8 miles with hills. I had 6 hill repeats on the schedule. The idea of running hill repeats was not appealing to me at all, especially since it was pretty warm outside. I opted to come up with a hilly route and consider that good enough. I ended up climbing about 200 feet over 3-4 miles, so it was a good challenge. Part of my route took me on some dirt roads in Oakland Township that I don’t usually hit. It made for some good scenery because there are some really amazing houses out there. I didn’t stop to take pictures of the houses, so I grabbed these from Google Maps (which explains the nice fall colors, haha.)

This picture does not do the house any justice. It is HUGE. 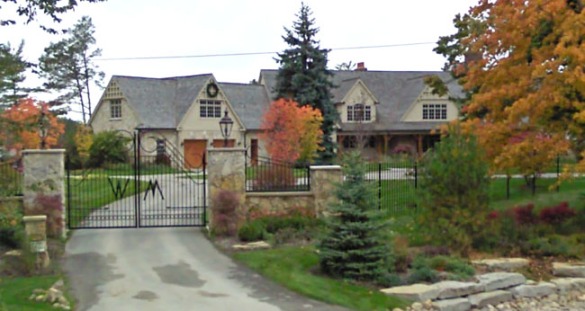 Another sweet house that is bigger than it looks here. Pretty nice neighborhood!

I also found a really nice boardwalk in that area. I had no idea any of this stuff was there! I’ll have to run out there more often.

This boardwalk was really pretty.

Saturday: Ran 9 miles at marathon pace. To make sure I could maintain the pace, I wanted to stick to a flat route. I opted to run on the Paint Creek and Clinton River Trails, and was lucky that Matt was willing to go along. He told me to follow him and not worry about the pace – he’d handle it. I’m pretty lucky! The goal was an 8:13 pace, and we finished with an average just under that. It was challenging at times, and not so bad at other times.

Sunday: Ran 19 miles. This training is getting really serious now. Yesterday’s run left my shins feeling a bit sore, but I was pretty much okay otherwise. I ran all over Rochester Hills for this long run, with about 7+ miles on trails and a dirt road, and the rest on sidewalks. Aside from running the trails around here, it’s pretty much guaranteed that I’ll hit hills somewhere. I sure didn’t make this route an easy one – it climbed from about the 3-mile mark to 14.

A pretty good climb for this run.

I took it easy and ended up averaging about 30 seconds over marathon pace. Matt found me when I had about 5 miles to go and finished the run with me. It was really nice to have his company, especially at the end. I held up pretty good until around 17 miles. At that point, I started to feel a bit of a stomach cramp. A half mile after that, it turned into a cramp in my upper left side. I slowed down a little and luckily I was able to run through it.

In 2012, I had a bad side stitch during the Bayshore half marathon. That hit about halfway through the race, and it got so bad that I had to walk the last 3 miles. Since then, I always worry about a repeat of that experience when I develop a side cramp. I’m glad I was able to finish today, but sure hope it doesn’t happen on marathon day.

Totals for the week: Ran 49 miles, did strength training once.

For my really long runs, I’ve been using a Camelbak hydration belt that holds two 21 oz. bottles. I have water in one and GU Brew in the other. I’ve also been using Honey Stinger chews. I’d never eaten anything during races before, but figured I’d better change that for the marathon. I’ve been taking 3-4 chews every 6 or 7 miles during my long Sunday runs and it seems to be going okay. By the end of today’s run, I was nearly out of stuff to drink. I think I might end up racing with the hydration belt, as annoying as it may be to have the extra weight at the start. I’ve gotten used to it and like knowing that I can drink whenever I want to. I really like having my specific kind of GU Brew as well, and I know the race won’t have that. I got a shipment of stuff from Running Warehouse this week, including more GU Brew and Honey Stinger chews. Before most of my runs, I usually have a Honey Stinger waffle, meaning I eat at least 6 a week. I am obsessed with these waffles and like to have plenty of them in stock.

Stocking up thanks to Running Warehouse.

I figured when I bought a new pair of Brooks Launch shoes 3 weeks ago they’d be the pair I’d use for the marathon. I didn’t realize how quickly the miles would rack up. I already have 93 miles on them! I rotate through several different kinds of shoes for various runs, but tend to go back to the Launch most of the time when I have 8+ miles to run. That means I’ve been using them for probably 3 runs per week. At this rate I might need another new pair before the race! I got around 350 miles out of my last pair before I realized the wear was pretty significant.

Looking at next week, I’m supposed to run back-to-back runs of 10 and 20 miles. This will be the first of 3 20-mile runs in my plan. I’m feeling pretty good about it after running 19 successfully, aside from the darn side stitch. I have been debating if I want to sign up for the Milford 30K next Saturday to help me get through my first 20-miler. With the race on Saturday, that means I’d run 20 first, followed by 10 on Sunday – the opposite of what I’ve gotten used to with my plan. Hopefully that would work out okay. I think the race environment and course support would be good, and it would be nice to have a course already mapped out for me. I’m not sure about it yet because I know it may be pretty warm that day, and I’ve heard it’s a hilly and challenging course. I know that could make it tough, but based on the hilly course I ran today, I’m pretty sure I could manage. It’s the heat I’m most worried about because the race doesn’t start until 8am. I may wait a couple days and finally decide.

Onto the next week of training, with a 50+ mile week!

3 thoughts on “Week 10 of marathon training”