Sunday, September 15th was the day of the Romeo 2 Richmond Half Marathon, and it also happened to be my birthday. I managed to PR by 2.5 minutes, so it was an excellent way to celebrate!

When I first considered this race, it was half because it would be fun to race on my birthday and half because it would help me get through a big chunk of my second 20-mile training run for the Grand Rapids Marathon. I was supposed to run 10 miles at marathon pace the day before, and 20 the day of the race. I was thinking that I’d add on the extra 7 miles and take it easy during the race. As race day approached, I realized it was going to be nice and cool. Combine that with a fast, flat course, and it makes for perfect racing conditions. I knew it would be hard to discipline myself and not truly race it. I opted to still run 10 miles the day before, but took it easy. I’d save the marathon pace for race day and push it harder if I had it in me.

Matt signed up for the half as well, and we headed out to Richmond early on Sunday morning. Packet pickup was available on Saturday morning in Romeo, and we were strongly encouraged to go then. We were told that it would save us from having to stand in line on race day. We didn’t want to make the extra trip, so we waited until the morning of the race. We got to Richmond High School a little before 7am and got our packets quickly and easily. Because the race raises money for the Macomb Food Program, we took some canned goods with us to the pickup.

They had technical shirts which actually had different cuts for men and women. They didn’t mention the different sizing when we signed up for the race, so luckily the size did work out for me. The packets included a drawstring bag with some goodies like animal crackers, trail mix, pretzels, and the usual coupons and flyers.

There were bathrooms in a building by the football field with no wait, but that’s probably because it was still an hour and a half before the start of the race. Since this was a point-to-point race, busses ran from 7-7:30 to take us out to Romeo. We found our friend Jeff, a speedy runner who I sit next to at work, and got on a bus easily. It was about 7:45 when we got to the park in Romeo, and the race was due to start at 8:30. I had decided to run 3 miles to warm up prior to the race. Rather than try to run the full 20 miles on my schedule, I’d run 16 miles and figure that the harder effort would help make up for fewer miles.

It was a cool morning around 55 degrees, so I had a jacket to leave at the gear check. They gave us garbage bags for our stuff and bussed them back to Richmond. Matt, Jeff, and I headed out on the Macomb Orchard Trail to run 3 miles to warm up. We went out 1.5 miles and got a preview of the first little part of the race route. When we got back, we had a good 10-15 minutes to spare before the start of the race. We knew a bunch of people at this race and chatted a bit as we headed out to the start. Everyone was gathered in a park/field area right by the trail, but the race actually started a good quarter mile or so up the trail. There’s a bit of an incline where the trail crosses over M-53, and we started right in the middle of the incline. The chip-timed race started right at 8:30, and we took off up the short hill. After we got over M-53, there was a nice little downhill stretch that made for a speedy start. After that, the trail flattened out and stayed that way.

The elevation chart for the race

The Macomb Orchard Trail is a nice paved path that mostly runs through some woodsy areas with a few farm-like areas with cornfields. People can probably run about 4 wide. With a little over 300 people running the half, there was a little bit of dodging and weaving at the start. It wasn’t bad, and people spread out soon enough. Luckily, it didn’t seem like there were many (or any?) non-racers out on the trail. At one of the first crossroads, I was surprised to see a co-worker there with his kids calling out my name! It was a great surprise that gave me a little boost and kept me smiling for a bit.

Considering how I’d run 10 miles the day before and was approaching the end of a 52-mile week, I wasn’t sure how I might hold up. I hoped to at least run at my goal marathon pace, which is 8:13. I actually ran 8:13 for the first mile, sped up a little for the next couple miles, then ran a sub-8 pace for the rest of the race. After the first mile or so, I ended up behind a couple of guys who were running about the same pace. I usually get uncomfortable if I’m hanging too close to people, but they both happened to be running a pace that was just right for me. We only chatted for a minute early on, and I learned that one of the guys was aiming for an 8-minute pace. That sounded good to me, and I joked that hopefully he’d pull me along. Although we weren’t talking, it was actually kind of nice to have them around. They were going at a good, steady pace and I think it helped keep me consistent. I was probably by one of the guys for almost 10 miles. There were a few miles in the low 7:50s, and I worried that I might be pushing too fast too early. I wanted to be a bit conservative for at least the first half of the race, and I’d step it up later on if I had it in me.

I’ve never eaten anything during a half marathon before, but wanted to practice for my marathon. I ate a few Honey Stinger Chews around 4.5 miles when I got hungry. At that point I’d actually run a total of 7.5 miles for the day. I ate a few more about 6 miles later, and switched between drinking GU Brew and water that I had in my hydration belt. The belt might seem heavy and obnoxious, but I’ve gotten used to it and really like being able to drink whenever I want to. 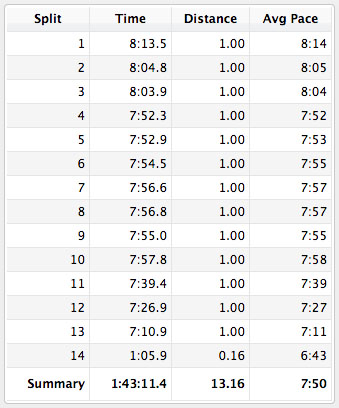 I was thrilled with my time. I knew I was well overdue to crush my half marathon PR, but kind of shocked myself that I could finish that strong. When I can hit my 5K pace at the end of 13 miles, I feel like I’ve definitely done something right. In the spring, I ran the Fifth Third River Bank Run 25K at a 7:50 pace and beat my half PR within that race. It was nice to finally be able to beat my PR officially though. The 25K was the most successfully executed race I’d run at that point. I started out a little slower than goal pace, picked it up and held it through the middle, then finished strong. I took a similar approach during this race, and it paid off yet again. It’s a really great feeling to finish a race feeling so strong. I probably still need to find the right balance so that I don’t have THAT much energy at the end though. Maybe I should push my pace a tad bit more a little earlier. It’s always a learning experience!

I collected my sweet medal at the end and got a bottle of water. Matt had finished just a bit before me and found me right after I finished.

I went right for the food to see what was available. I got some apple cider, apple slices, a banana, and a bagel. The guy I’d been running by for the first 10 miles came over and we talked for a bit. He managed to hit the 8-minute pace he’d been aiming for and PRed. In addition, he got an age group award. It’s always fun to talk with people at races and realize how friendly and supportive most people are. Most of us are out there trying to achieve our own individual goals and racing against ourselves – not each other.

This race awarded age groups by every 10 years and I was 5th out of 48 women 30-39. Had they used 5-year age groups, I would have pulled off a third place finish. Oh well! I have never placed in a half marathon and wasn’t expecting it anyway. Matt and I hung out for a bit to talk to friends, and it was fun to see so many people we knew. 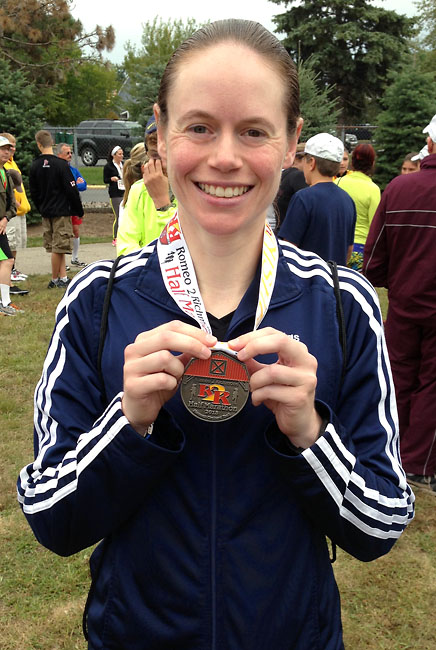 Me with my medal

When we left, we went to Dairy Queen to gain back some of those calories we’d burned. After that, we hit a cider mill for some donuts. Running a half marathon on my birthday was a great idea because it helped me justify eating a whole bunch of junk food without feeling too guilty!

Although it may have been a little risky to race so hard during marathon training, I’m glad I did. It makes me wonder how much more potential I still have when it comes to racing a half. If I don’t run 10 miles the day before and I’m not in the heart of marathon training, I can probably shave even more time off. This race left me feeling even better about my upcoming marathon. Apparently Hal Higdon’s Advanced 1 plan is working wonders for me!