Week 16 of training for the Grand Rapids Marathon is complete. Only 2 weeks until the big race! Although this past week could be viewed as the beginning of my taper period, it didn’t really feel like it. It just felt like another stepback week. I think this next week is when I’ll notice more as I drop from just above 40 miles down to just above 30. I haven’t run a week with less than 40 miles since mid-August. Here’s what I did for week 16:

Monday: Ran 4.5 miles. I had 5 miles on the schedule but only made it to 4.5. I think my mind was in a fog or something because I had convinced myself that I was going to end up with 5.5 miles. I had my watch on, but I guess I was oblivious. I did not feel good during the run so it was probably for the best. This run actually felt worse than the 5 I did the day after running 20 miles. I went slow and my shins hurt during a good part of the run. Aside from a few moments here and there, I usually don’t feel my shins while I run. It’s more of an issue afterwards. The fact that I felt them so much during the run worried me. In addition, my nose had been pretty runny during the day and I figured I was coming down with a cold or some kind of sinus issue. Just great. I reasoned that if I’m going to get sick, it’s best if it happens 3 weeks out from the race so I have time to be completely healthy by race day.

Tuesday: Ran 7 miles – 6 hill repeats. Sure enough, the runny nose and congestion problem I developed on Monday was no better on Tuesday. By the time I got out of the car after work I was ready to fall asleep. I was determined to keep up with my training though. Running usually makes my sinuses feel better and luckily that was the case for this run. The hill repeats plus a warm up and cool down went just fine. I had an audience for this workout – our cat and the neighbors’ dog were both watching me out the window. 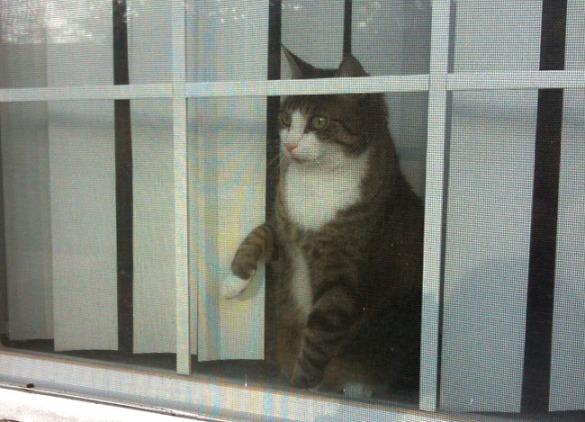 It’s always nice to be greeted by our cat when I get home from a run!

About 5 minutes after I was done the sneezing started up again. I also had all of the warning signs of a migraine, but fortunately it never fully materialized. I haven’t dealt with a migraine for at least a couple years and I think the sinus pressure probably had something to do with it.

Wednesday: Ran 5 miles. I felt crappy all day at work and could barely breathe, but decided to try running anyway. It was actually the best I felt all day. Once I was done I went back to feeling like crap again. Too bad I only had 5 miles to run!

Thursday: Ran 8.75 miles. I had 8 miles on the schedule but went a little bit longer. It’s starting to get dark too early now and I ended this one in the dark. I’m not looking forward to the evening headlamp runs! I finally started to feel better today and could breathe again. It’s a relief that it didn’t turn into something more serious.

Friday: 40 minutes of strength training. Typically my rest day, I decided to get to the gym since I hadn’t been all week. I didn’t feel like it would be appropriate to go earlier in the week while I was sniffling, and I finally felt okay by Friday.

Saturday: Ran 4 miles at marathon pace. Here’s where the cutting back started to feel weird. Only 4 miles on Saturday? At least it was a pace run to help keep things challenging. It was dark and raining when I woke up. I wasn’t too excited to head out, but I’m sticking to my plan and if it says I’m supposed to run, I’m going to run. By the time Matt and I went out it was light and had pretty much stopped raining. I still had some congestion that annoyed me during this run, but I was fine otherwise and we averaged 7 seconds per mile under my goal pace.

Sunday: Ran 12 miles. It was raining once again when I woke up, but it let up by the time we headed out. I guess I got lucky with my timing this weekend. Matt ran with me for the first 5 miles. My legs felt tired and I was a bit slow for the first 4-5 miles, but then I must have warmed up enough to pick up the pace a tiny bit for the rest of the run. It was super humid outside and when I actually did have brief moments of rain, I think that felt better.

Totals for the week: Strength training once, ran 41.25 miles.

Everyone keeps warning me that strange things will happen when I taper. I’ll suddenly feel new aches and pains, I’ll be lethargic or really jittery, I’ll have a short temper, etc. We’ll see what actually happens. I have a feeling I’ll be thankful to have a little bit of extra free time! If I was smart, I’d use the extra free time to get more sleep. However, I always find something to fill that time and never get the extra sleep. For example, I write a blog post like this when I ought to be in bed. So if I end up feeling lethargic, I’m not going to blame it on the taper. I’ll be used to it from my typical lack of sleep!

2 weeks to go and I’m ready to just do this thing…I don’t want to wait anymore!

4 thoughts on “Week 16 of marathon training”