A couple weeks ago I decided to sign up for an Olympic distance triathlon. It was a goal of mine at the beginning of the year and I’m sticking to it. March’s car accident (in which I was t-boned) derailed many of my racing goals for this year. Six weeks off and a very gradual rebuilding phase was quite a setback. Thoughts of a spring half marathon went out the window. My back still bothers me at times and is not 100% yet, but it’s not holding me back (much) anymore. I’ve been able to successfully race a super sprint and a sprint triathlon this summer. I debated for quite a while whether I should really consider doubling the distance. Ultimately, I decided I’d give it a shot.

I signed up for Island Lake Triathlon’s summer Olympic distance race on Sunday, August 17 – a 0.9-mile swim, 24.8-mile bike, and 6.2-mile run. The race takes place at the Island Lake Recreation Area in Brighton, MI. I feel like my run training is on track, as I’ve averaged 25-30 miles per week recently and have run as long as 12 miles. I’ve been swimming once a week lately with no speed work, so I’m lacking a bit there. However, I’ve practiced in the open water several times recently. I usually swim at least a mile each time I swim, so I’m not concerned about that part. The water temperature is reported to be 71 degrees, so once again I will manage to get away with not having a wetsuit yet. As usual, it’s the bike that I worry about the most. I looked at a training plan for the Olympic distance and laughed when I saw the bike training. No wonder I’m no good on the bike! I definitely spend too much time running and not enough time on the bike according to real training plans. I’ve been biking 10-15 miles a couple times during the week, and my longest weekend ride was 30 miles. I still haven’t gotten brave enough to try bike shoes and I know that would make a difference too.

I should be able to get through the distance, so that’s pretty much all I’m aiming to accomplish. I don’t have any major goals for my time. I’m guessing the swim might take about half an hour. The bike portion might take nearly an hour and a half unless I manage to step things up. I hope I can finish the run in 50 minutes. My 10K PR is around 46 minutes and I really don’t know how I’ll feel after racing for two hours before that. It might take almost three hours for me to finish this race. That makes me realize that I’m taking on a pretty big challenge, so hopefully I’m up for it!

Now that tri season is winding down, I decided it’s finally time to figure out a plan for the fall. I would really like to target a fall half marathon and possibly chase a new PR…or at least get close. I’ve been winging it this summer and have signed up for races only a couple weeks in advance. I’d like to have a specific goal for the fall. I came up with a list of races and determined how many weeks I’d have to follow a real training plan. Matt and I went through the list and decided that the Naperville Half Marathon looked pretty good. We have family in Naperville, which is a Chicago-area suburb. One of our family members ran the full marathon last year and plans to do so this year as well. The race takes place on Sunday, November 9, meaning we can start a 12-week training plan on Monday. Perfect! 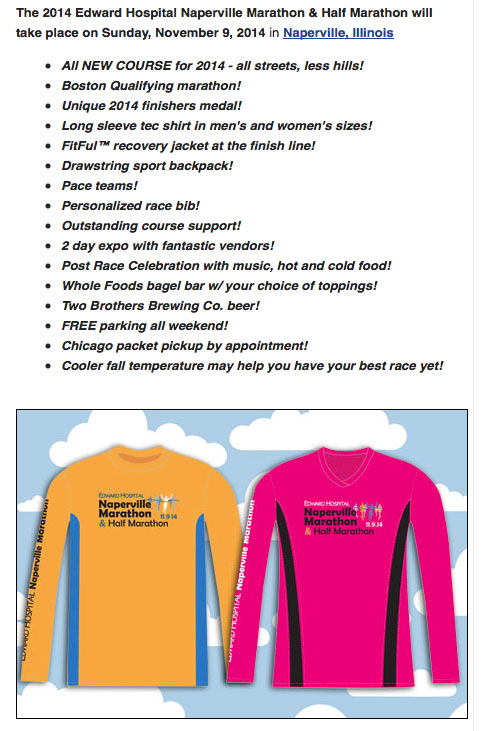 Knowing that we have 12 weeks to train makes me feel like I have enough time to really make this a goal race. After following Hal Higdon’s advanced plan for my first marathon last year, I realized how much I enjoyed following a structured plan rather than piecing various plans together myself. I plan to follow Higdon’s advanced half marathon plan this time.

Since I’ll be putting in a pretty good effort on Sunday with the triathlon, I might alter the first week of training so I can recover properly. I’m looking forward to starting a structured plan again.

In addition to the half marathon, I’m hoping we’ll do a few other races this fall. There’s the Dig ‘Em Dash in Battle Creek, MI on Saturday, September 27. We’ll probably be in town to visit family that weekend, and who doesn’t want to run a race that involves this guy? 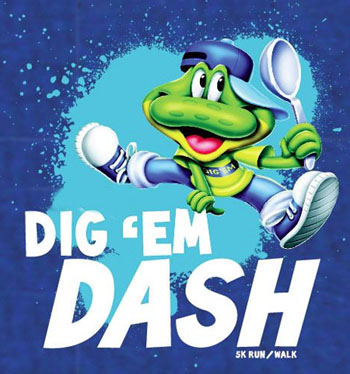 I also came across the Grand Rapids Bridge Run on Sunday, September 14. The 10-mile race goes through downtown Grand Rapids, crosses some bridges, runs along the Grand River, and through some parks. Between the 25K River Bank Run and the Grand Rapids Marathon, Matt and I have really enjoyed racing through Grand Rapids. This sounds like another fun one that we may aim to run.

There’s a fall colors run across the Mackinac Bridge, and plenty of other fun races to choose from as well. We’ll see how many we manage to fit into our schedule…and budget! In the meantime, tomorrow’s race is going to be a big one and will probably wrap up the tri season for me this year. It should be quite an experience!