The Shermanator was my second triathlon of the season and took place on Saturday, August 1st. Although it makes me think of the character from the American Pie movies, the race gets its name from the Sherman Lake YMCA Outdoor Center in Augusta, MI. Located between Battle Creek and Kalamazoo, it’s also close to where Matt’s parents live. We were able to stay with them and spend a nice weekend together in addition to me doing the race.

With the Twin Cities Marathon being the top priority on my racing schedule, I’ve decided that I will only do triathlons on “down” weekends when it comes to marathon training. I don’t want to miss any of my really long runs. My training schedule cut back to a 12-mile long run the weekend of the Shermanator, versus 17 miles the week before and 19 the week after. I was okay with skipping a 12-mile run if I needed to recover from the race, but I actually felt fine and still managed to do the long run the following day anyway.

Matt and his dad were kind enough to support me despite the crazy early arrival time. We parked in the designated field and had a bit of a hike to get to the YMCA’s recreation center, where I checked in around 6:30 am. I wasn’t guaranteed a shirt because I registered a few days prior to the race, but luckily they had a table with some extras and I was able to get a shirt in my size. After I checked in, we had more walking to do to get down to the waterfront. I enjoyed the walk through the woods on the paved trails, where we passed things like an archery range, cabins, a band shell, and more. It’s a really nice center with a lot of activities for retreats and campers. 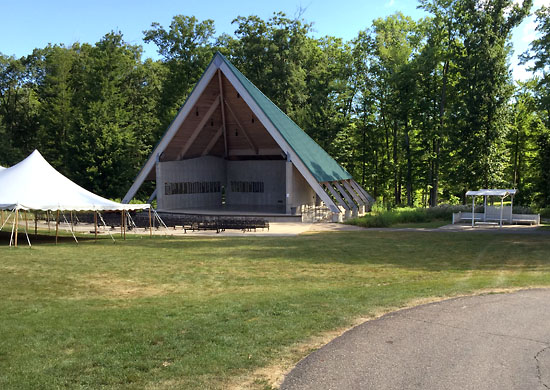 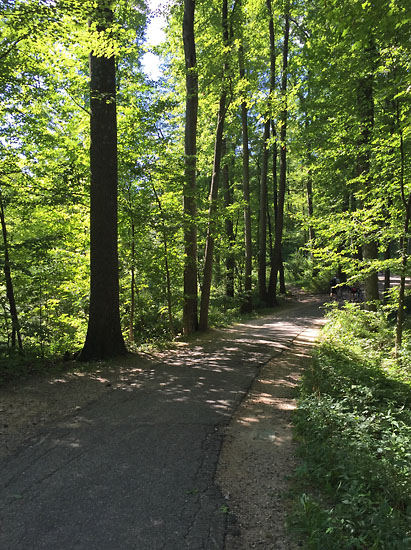 Very nice paths through the woods.

A large church group had their own section of racks in the transition area, and the rest were first come first serve. I chose a rack on the concrete so I wouldn’t have to worry about getting as much grass off my feet after the swim. The transition area was in the woods and it was a pretty setting. 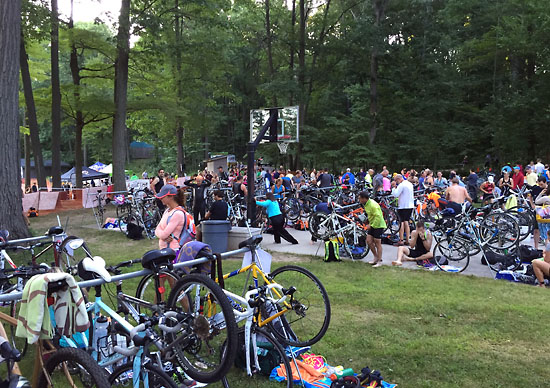 I was happy to find a building with real bathrooms by the beach. They also had porta-potties, so I didn’t see anyone waiting in long lines. I went down to the beach to scope it out. The lake looked beautiful! 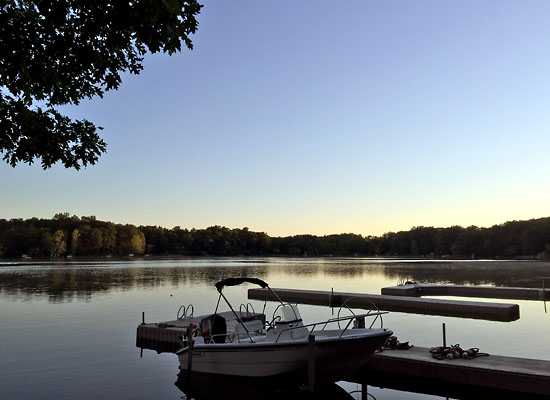 A great photo from Matt. 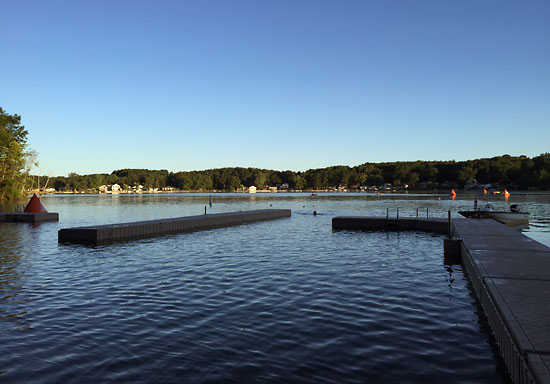 I wanted to get a feel for the layout, so I did a quick run from the beach up to the transition area. It was nice that they had mats on the grass, making the run a lot smoother. 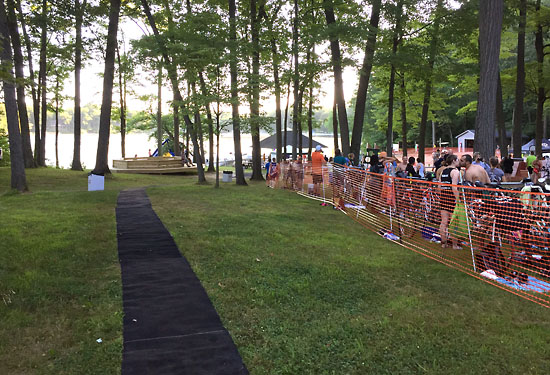 The path from the beach up to the transition area.

Transition closed at 7:30, and the first of four waves started at 7:45. There were a couple of waves for the men first, then a couple for the women, with each wave starting about four minutes after the previous one. I was in the third wave, with women 45 and under. The water was a warm 78 degrees – warmer than the air.

People were told that they could hang back by the beach where it was shallow if they chose, because it got deep pretty quickly. I wanted to be up near the official starting line so I wouldn’t waste any time. I treaded water at first until I realized I could just hang onto the dock and save energy. 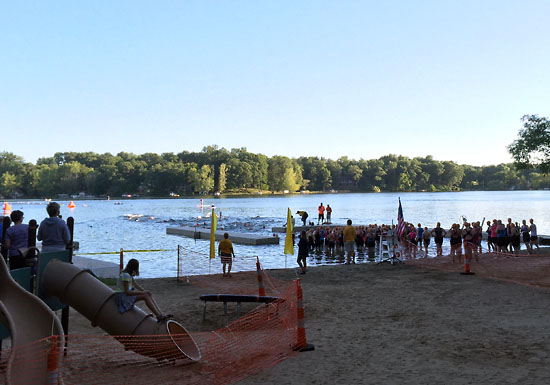 Matt took some pictures, including this one of the start of the swim.

My pre-race nerves were especially bad because of stomach issues. It had been messed up since Wednesday afternoon and continued to bother me when I woke up the morning of the race. I didn’t want to back out of the race and figured I’d give it a try. I hoped I’d at least be okay for the swim and bike, but worried about the jostling motion when it was time to run. I wanted to be excited about the start of the race, but I was too conscious of the dull pain in my stomach. When it was time for my wave to start, there was no looking back!

After racing an Olympic triathlon last month, I was excited about the sprint distance because it would be so much shorter and faster. The Shermanator only had a sprint distance. The swim was 500 yards, so I didn’t bother with a wetsuit. I’d practiced swimming fast for 400 meters earlier in the week and felt confident. However, when I started the race, my legs felt tired from the start and I worried about how the rest of the race might go. I felt a little better as I went along. I was spoiled when I swam in the beautiful Lake Huron for my last tri. This was the typical kind of lake I’ve grown used to, where I could see a little bit in front of me, but not much. A few spots had some seaweed, but nothing bad. Although I was slower than I expected to be, it went okay. 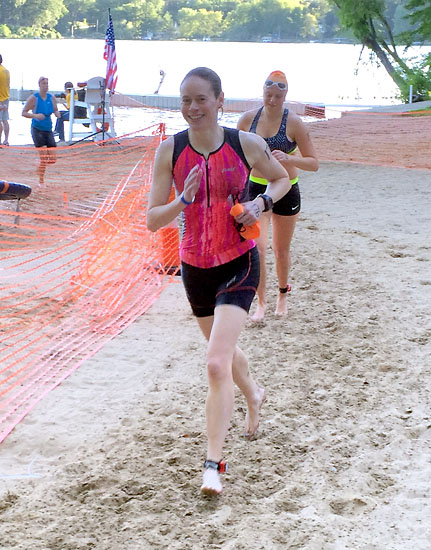 On my way to the transition.

The swim and run up the beach and through the grass took 10:54. I got through the first transition in 1:25, mostly slowed down by putting my socks and shoes on, and trying to get my thick, wet ponytail through my helmet. 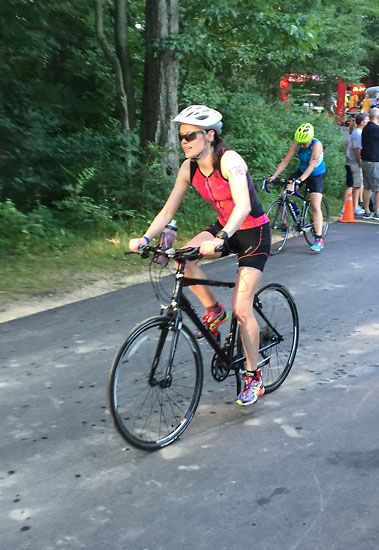 The bike course started uphill, and I was already totally winded from the swim. I finally recovered after the first mile on the bike. We rode on some trails through the park and out to the main roads. I wouldn’t say the roads were rough, but not the smoothest I’ve been on either. The course had a few rolling hills that slowed me down, but nothing significant. I didn’t think about my stomach at all on the bike, so I felt pretty good at that point. Still, I’m never very fast on the bike. I peaked at 19.9 mph for one downhill mile, but averaged under 17.5 mph overall. I finished 10 miles in 34:28.

Elevation for the bike course.

I flew through the second transition in 33 seconds. Like the bike, the run started uphill on the way out of the park. We ran on the paved trails, had a brief stretch on a gravel path, then went out to the roads. The first mile was pretty tough between tired legs from the bike and starting uphill. Nearly a mile into the run, I caught up to a woman who was wearing a bike helmet while running – something I’d never seen before. I wondered if it was her way of saving time. Just after I passed her, I heard her realize out loud that she still had it on. Apparently it wasn’t intentional!

I got through the first mile in 7:42 and the second in 7:49. After running my first couple miles under a 7:30 pace during last month’s Olympic tri, I was not impressed with myself. This was shorter and should be faster! This course did have enough small, rolling hills to slow me down a bit. I became more aware of my stomach during the run. I had a dull ache/cramp on my left side. I was extremely thankful that it wasn’t worse though. I kept telling myself that it wasn’t going to be my greatest day, but I was still doing it. I sped up to a 7:20 pace for the third mile, mostly thanks to flying down the hill that was so hard to climb at the start. I finished the 5K run in 22:56. The official results said I averaged 7:22 per mile, but my Garmin had my average at 7:37 per mile, with the course a little short at 3.02.

The elevation for the run.

I finished the whole race with a time of 1:10:13. I had estimated that my time would be around 1:10-1:15, so I was pretty happy. I was also excited to see that I had placed as the sixth woman overall (out of 78), and third in my age group! The race had 154 finishers for the triathlon, 19 in the duathlon, six in the aquabike, plus a few relay teams. 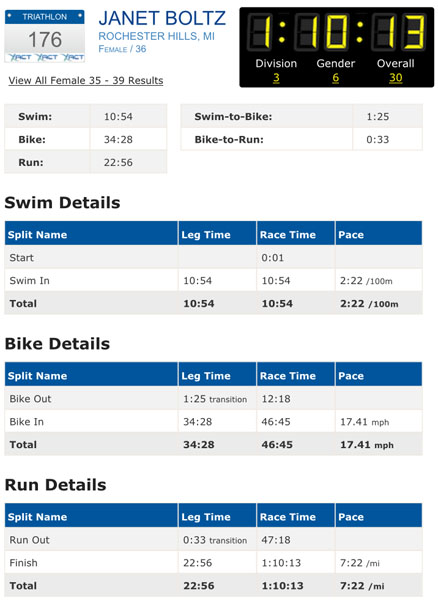 I usually need a couple minutes of walking around to recover after a race. This time was different though, because in addition to feeling wiped out from a hard finish, stomach pain came on literally seconds after I stopped running. I usually want food right away, but I was suffering. I grabbed a slice of watermelon and ate it as I hunched over at a picnic table. Despite feeling so bad, I knew I needed something after racing for over an hour. I was happy to see chocolate milk, which is my usual recovery drink. I didn’t feel like having a granola bar or yogurt, but I took some blueberries. Once again, I hunched over at the picnic table in pain. I thought it was interesting that I made it through over an hour of racing, but the second I stopped, things got really bad. Because I had won an age group award, it meant I had to wait around for the ceremony. Matt checked to see if I could get it early, but I couldn’t. I found a place to sit and tried not to move. Eventually they got to the awards, and we took off right after I collected mine. 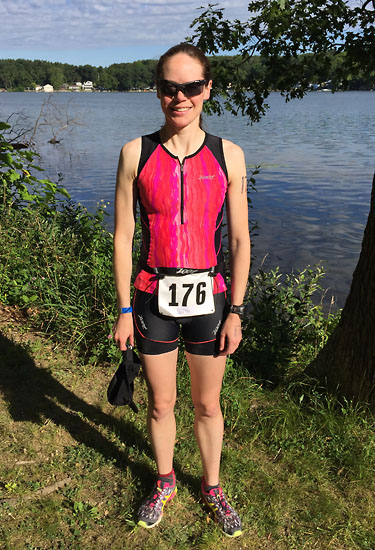 Faking a smile even though I felt miserable! 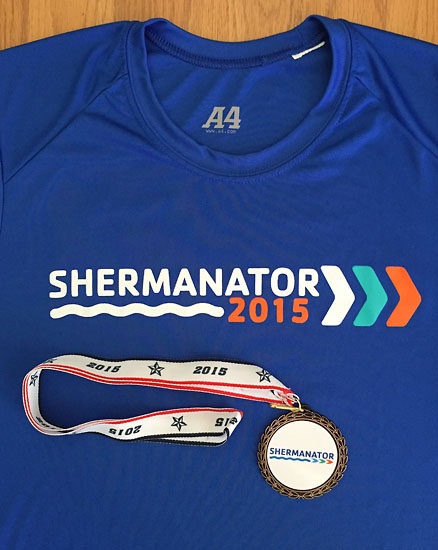 My age group medal along with the great race shirt. Sure to be a new favorite of mine.

It had been a long walk into the park, but it felt REALLY long on the way out as I walked while hunched over. I was so thankful to have Matt and his dad there to help with my bike and other stuff. Before we could get to the car, I felt nauseous enough to hit the bushes and get sick. The stomach pain stuck with me the entire day, and luckily I felt better the next day.

Aside from the stomach misery, it was a great experience. I realized after the race how much I liked the grouping of the waves. With all of the men starting before the women, I didn’t have them flying around me during the bike portion. In nearly every other race I’ve done, some of the men are SO much faster than me on the bike and it makes me feel even worse about my slowness as they zip by. I still knew I wasn’t fast, but it was nice that it wasn’t as blatantly obvious. Although a little challenging at times, it was a nice course. I hope to do this race again when I feel better so I can truly enjoy it.