Matt and I went to Grand Blanc, MI to run the Chocolate 5K on Saturday, November 21st…the day when we happened to get the first major snow storm of the season. Perfect timing. I typically wait until the last second to sign up for races this time of year. It was still in the 60s and beautiful outside when I decided to register before the price jumped. Snow was not on my radar at that point and I was tempted by the cool shirt and promise of chocolate. I was harshly reminded how quickly the weather can change in Michigan. Honestly, it’s a good thing that I committed early. Had we waited until the last minute, we probably wouldn’t have gone and we would have missed out on a fun morning.

We ran this race in 2012 and knew we could expect a good time. You really can’t beat it – $20 for a long sleeve tech shirt, a flat course, and a ton of chocolate goodies after the race. I’d pay $20 for the shirt alone! I was especially happy when I found out they were high-quality New Balance shirts. 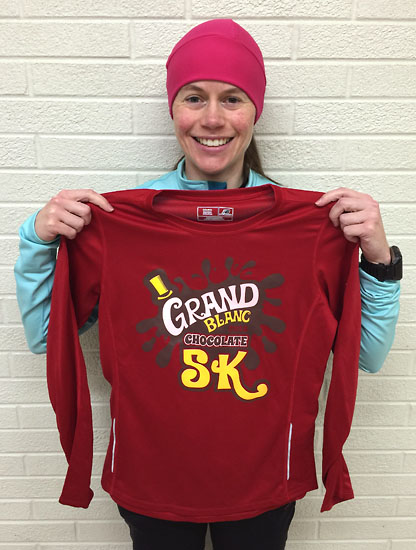 How cool is this Wonka-esque shirt?

We’d heard all the hype about snow coming, so I was relieved that I didn’t see any when I woke up the morning of the race. It had started to accumulate a little on the grass by the time we left home though.

Grand Blanc High School is a great location for the race. It has a huge parking lot, large bathrooms, and plenty of space for people to stay warm beforehand.

It was snowing pretty steadily when it was time for the race to start, but we were lucky that it wasn’t sticking to the streets. 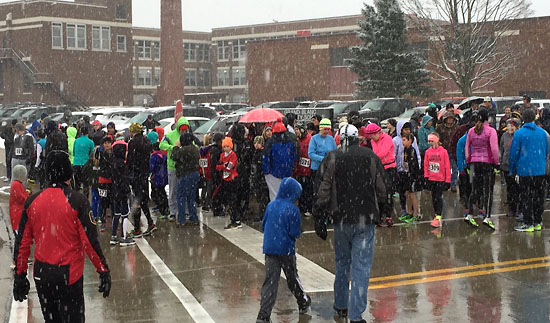 One positive is that the streets were just wet.

The race had 450 runners and around 120 walkers, so it was a pretty decent crowd. There was a gun start and chip finish. Though I was close to the front, maybe I should have moved up a little more. I got boxed in at times early on and did a bit of weaving to get around people, but things spread out soon enough. We ran on one of the main roads to start then spent the majority of the race running through a neighborhood.

I’m basically in maintenance mode at this point of the year and not doing much structured speed training, so I wasn’t looking to “race” this one. I wasn’t too excited to have snow blowing in my face and really didn’t care what my time was, but still tried to put in some decent effort. I kept telling myself that it was all worth it for the shirt and the chocolate fountain waiting at the end.

My official time was 23:23, which is almost two minutes off of my PR. 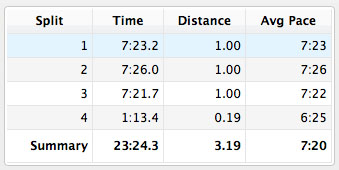 Matt and I didn’t linger at the finish line – we headed back to the school immediately. We had to walk for several minutes and cross a main road to get back to the school. We were anxious to get inside where it was warm and get to the chocolate! 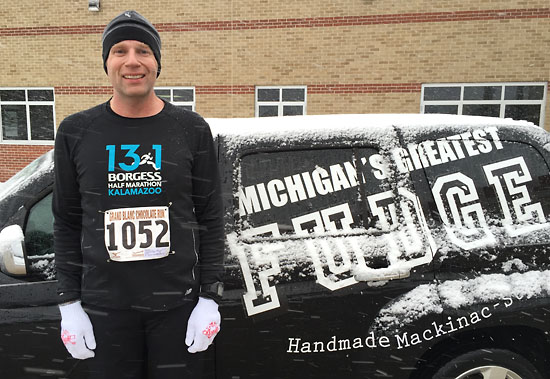 You can see the snow blowing in front of Matt as it started to accumulate.

The post-race goodies were set up in a gym, and we had hustled back fast enough to avoid the crowd. There were several stations set up. 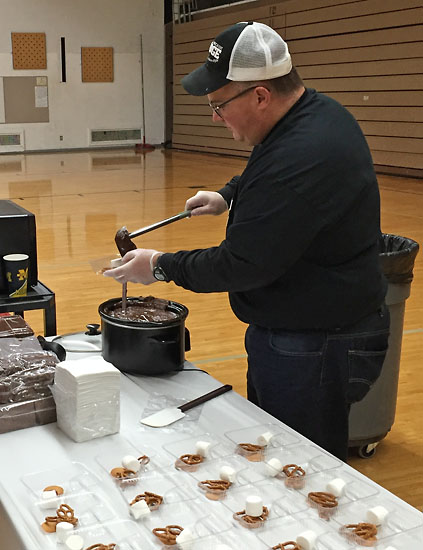 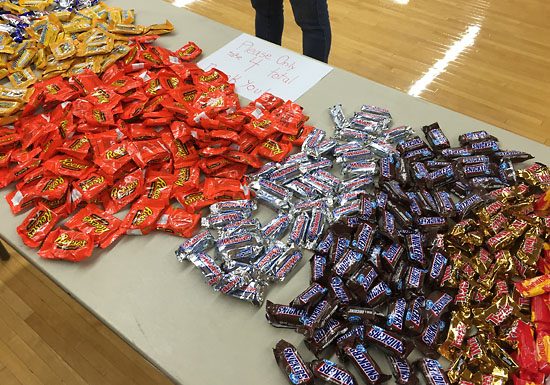 An assortment of candy. 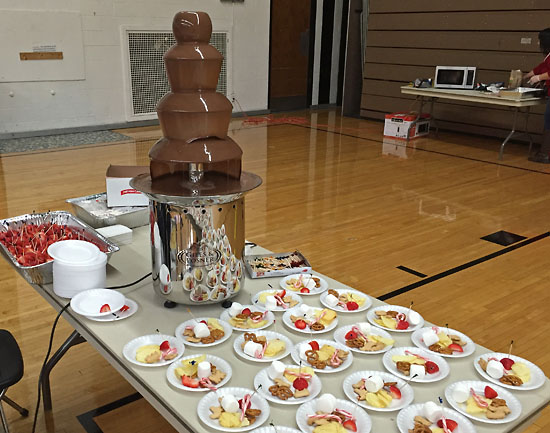 We sat on the floor to enjoy our treats as the crowd began to grow. 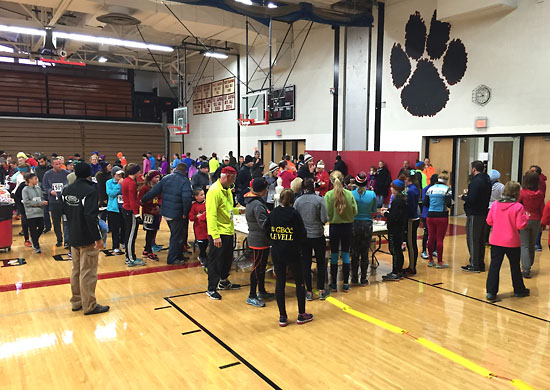 At some point there was an announcement that people could collect their awards, so we headed out to the lobby to see how we had placed. Matt had missed third in his age group by less than a second, and I was surprised to see my name at the top of my age group. I love that this race lets you collect the awards when you’re ready rather than waiting through a long ceremony. When I told the volunteers how I had placed, they gave me a couple treats. 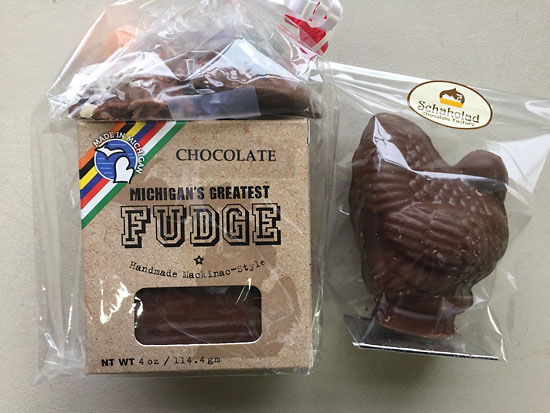 Fudge, salt water taffy, and a chocolate turkey. I’ll take that kind of prize over a medal or plaque any day!

Knowing that the snow wasn’t stopping and that we had a 40-mile drive home, we headed out as soon as I got my award. Good thing we did, because the road conditions were starting to get iffy. We didn’t go much faster than 50-something on the highway and saw several cars in the ditch. Luckily, we made it home safely.

As we drove through our neighborhood, I loved how beautiful the snow-covered trees looked. I had to take a quick walk down to the Paint Creek Trail to scope it out. 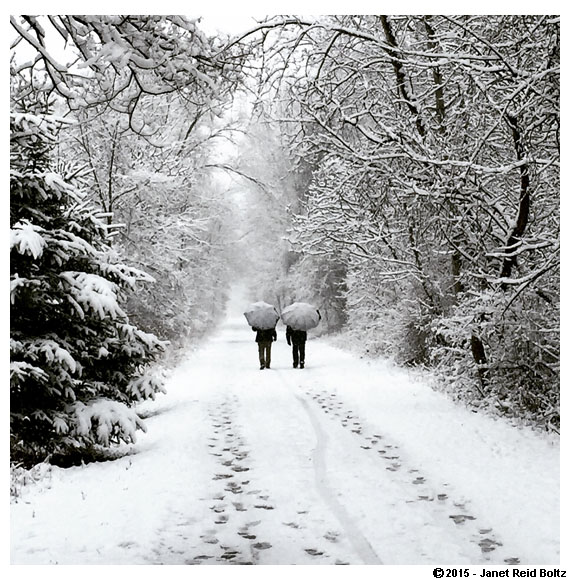 It’s hard to believe that it was 60 degrees a few days earlier.

I was thankful that we didn’t have any other plans for the day, so we settled in and stayed warm while 12+ inches of snow piled up throughout the day.

Although the weather tends to be questionable for this race most years, it’s definitely a good one and I’m glad we did it.