I don’t remember exactly when the thought of doing a triathlon entered my radar. I started running races in 2010, occasionally used the bike for cross-training, and had grown up as a swimmer. I knew that my aunt and cousin participated in triathlons, and that was pretty inspiring to me. I think I had considered the possibility of doing a triathlon for quite a while before I was brave enough to take any action toward making it a reality.

One of the biggest factors holding me back was access to a pool. I started using Oakland University’s rec center in 2007, where I had an “alumni spouse” membership thanks to Matt. They have an amazing pool, but it doesn’t open early enough in the morning for me to swim before work. In the afternoon it was always packed with kids from a competitive swim team who use the pool for their practices. It seemed like half the time the pool was used for swim meets on weekends. I never tried to figure out when I could actually get into the pool.

One morning while I was working out at the rec center, I saw a bunch of people doing an indoor triathlon. I knew that I could do it too and was kind of bummed that I wasn’t participating. That helped motivate me to give one a try. I really had to get into a pool and return to swimming.

I joined Life Time Fitness five years ago today, and that anniversary prompted this post. Joining Life Time was my first big step toward finally getting into triathlons. The facility is 24/7, which meant I could actually get into the pool early enough to swim before work. Once I got back into swimming, I didn’t have an excuse to delay trying a triathlon anymore.

Saturday, March 2, 2013 was my first triathlon experience. Life Time had an indoor triathlon that was an hour long. 10 minutes in the pool, 30 minutes on the spin bike, and 20 minutes on the treadmill. It sounded like the perfect way for a beginner like me to see what a triathlon was like. Even though I really wanted to do it, I was hesitant to sign up at first because I was nervous about logistics. I worried about what to do during the 10-minute transition from the swim to the bike, so I practiced a transition at the gym one day. I didn’t have a triathlon suit or anything, and I tried taking my swimsuit off then switching to my biking/running clothes. That took me too long, so another day I tried putting my clothes on over my suit and it went much smoother. Once I felt more comfortable with that, I knew I’d better sign up and just do this thing.

It was due to start at 7am with waves of 10 people going off every 20 minutes. I signed up for the third wave so it wouldn’t be so early, but early enough that the locker room wouldn’t be too crazy. I got an email from the guy in charge of the race a couple days beforehand with the rules and the wave info. I saw that I was in a wave by myself! He asked if I wanted to switch, and I said I was okay with it because it meant I wouldn’t have to share a lane for the swim. He said that was fine and more people would probably sign up.

I got there half an hour early the morning of the race to check in. I received a visor as swag for the race, got my bib for the bike and run, then had my race number written on my arm and my wave number on my hand. I saw that two more people were in my wave, so at least I wouldn’t feel too weird about being in a wave alone. I still had nerves even though I knew I’d be fine! 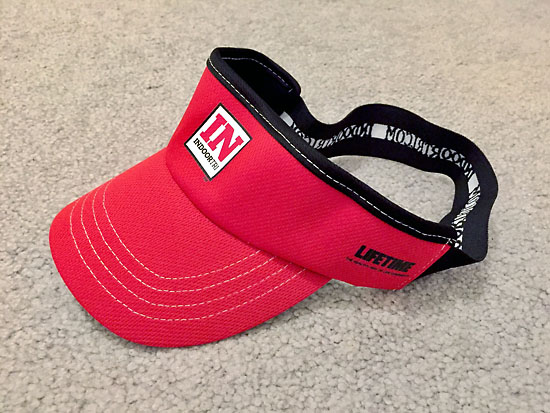 I headed to the pool as the previous wave finished. A guy and a girl were in my wave and both were very nice. Everyone was very encouraging and supportive. The girl had done the race the previous year. She said they had put her in a lane with a guy assuming he’d be faster, but they ended up swimming side by side. I was relieved that I’d have my own lane because otherwise I’d worry about crashing into someone while doing a flip turn. I had time to swim two lengths to warm up, then it was time to start. They put us in the three center lanes of the pool and people sat at the other end with clipboards to count our lengths. They had cones at the halfway point because half-lengths counted too. We were told that they would blow a whistle with one minute left, then three times when our time was up. Once I got going, I got water in my ears and couldn’t hear anything anyway. I knew from my training that I should be able to pull off 20 lengths. It seemed like the time flew by. When I hit 20, I still hadn’t heard the whistle. I barely heard the three whistles to end the swim before I reached 21.5. When I stopped, I was pretty wiped out. I hopped my way through the rest of the pool to the wall, and I was a bit wobbly when I got out. I went into the locker room for the 10-minute transition time before the bike.

I took my swim cap off and went to my locker to dry off quickly. I threw a shirt on along with my tri shorts. I put a hat on, semi-dried my soaking ponytail, then put my socks and shoes on. I gathered my iPod, water, and some towels, and still had a couple minutes to spare as I ran to the cycling studio.

There were people riding the spin bikes when I got there, and the volunteers directed me to the other side of the room. The other people were from the last wave and still finishing their half hour ride. I got to a bike and tried to raise the seat but struggled. I’d only used the spin bikes once and didn’t really know how they worked. Luckily the guy in charge came over quickly and helped me out. He adjusted my seat and handlebars for me. What a lifesaver! There was a little calculator hooked up to the bike to show speed and distance. I had read online that the distance seemed to be greatly exaggerated, so I was expecting that. My problem with the spin bike is that I didn’t know how to gauge the perfect amount of resistance to use. I never really figured that out, but I hit around 40 mph at my best. Obviously it WAS way off because I’m not that fast. I biked pretty hard, but could tell the guy in my wave was going much faster. I have a lot to learn when it comes to the bike. The volunteers were great and kept telling us we were doing good and to keep it up. One guy waved towels at us to give us some breeze and they had music blaring so I didn’t need my iPod. I pushed as hard as I could and my legs felt pretty rough when I got off the bike. We had five minutes to transition to the run. I stretched a bit, went upstairs, filled my water bottle, then went to the treadmills.

They told us the best way to start was to hit the Quick Start button then bump the speed up. I did, but quickly realized I shouldn’t have listened. I usually hit the 6 mph button (a 10-minute pace) and speed up from there. The Quick Start ramp up from 0 was REALLY slow. I finally got the pace to the mid-8s, then the 7’s. I decided my legs didn’t seem to hurt from the bike, so I set it to 6:44. I really surprised myself by managing to hold that pace for a couple of miles! At one point I adjusted it to 6:40, then even faster than that. I didn’t keep that up for long though because the right side of my stomach started to cramp. With around five minutes left I didn’t have much willpower and dropped my pace to 7:08…which was still fast for me. I didn’t think I’d be fast enough to hit three miles in 20 minutes, but part of me hoped I might. I ended up with 2.92 miles in the 20 minutes. So close! If I didn’t have that slow ramp up, maybe I would have been even closer. Despite that, later I calculated my run to be a 6:50 average pace. My 5K PR pace at the time was 7:07, so I was THRILLED. I was wrecked by the end of the run and walked on the treadmill for a few minutes to cool down.

Results would be gathered from all of the waves and they’d make a database with a special points system, so we didn’t know how we truly did until a few days later. That made it feel kind of uneventful when we finished because my wave was so small and we had no clue how we did overall.

My overall count was:

I felt really proud later that day. I finally did it, and it seemed like I pulled it off pretty decently. A couple days later I got an email with the results, and it turns out I was more than just “decent” – I was first place out of the women! My first attempt at a triathlon and I was first? I couldn’t believe it. It certainly confirmed that I really ought to give triathlons a shot. Life Time had a cool trophy for me that I picked up the next time I went to the gym.

I’m thankful that I ended up at Life Time and that they provided that spark for me to kick-start my triathlon adventures. I’ve spent many, many hours there over the last five years, and have now had four fun seasons of participating in triathlons. Hopefully I’ll have many more to come!

5 thoughts on “A Throwback to My First Triathlon Experience”