Brooksie Way is the ultimate hometown race for me. We live half a mile north of one section of the route, so that’s about as close to home as it gets! The half marathon starts and ends at Oakland University, and the course winds around the trails and roads I run all the time in Rochester/Rochester Hills. It’s a scenic course with good variety, but it’s also very hilly and challenging.

One thing that really draws me to the race is the sense of community. Between the 5K, 10K, and half marathon, over 3,700 people participated this year. I love getting to participate in a race in my town and seeing the race proceeds go back into the community in the form of mini-grants. It’s fun to see so many familiar faces, between running friends I know from the area and people I see at the gym and on the trail regularly. The Chevy Running Club from my work takes part in the Team Challenge and draws a pretty big group too.

As much as I love this race, I was kind of surprised when I realized I had only done it twice – in 2011 and 2012. I had to look back at the last five years to remember why it had been so long. The race conflicted with family plans in 2013. In 2014 and 2015, the course was altered due to construction and took runners up a brutally steep hill that I hate during the later miles. Because of that, I bypassed the race those years. I signed up for last year’s race, but a pesky stress fracture derailed those plans. After a five-year break, I was pretty excited to get back to it this year.

The race expo is held at Oakland University’s recreation center. This year they offered $15 discount codes for 2018’s race to the first 100 people in the doors both Friday afternoon and Saturday morning. I got there about 10 minutes early on Saturday morning and was among the first 15 people, so I guess now I have a good reason to commit to next year’s race! It was nice to get there early before it got crowded. I picked up discount codes to a couple other races I may consider, and found some good deals on shirts…as if I need more. I found high-quality Brooks podium shirts for $10 a piece.

In the past, the official race shirts were nice ones from Brooks too, but not these. I prefer the Brooks quality, but hopefully this one will be nice enough to wear regularly.

I also stopped by the official Brooksie merch table and got an additional shirt in honor of the 10th year of the race.

The race was due to start at 8:00 on Sunday, September 24th. I got there a little before 7:00 and parked easily right on the race grounds. Typically, it’s the perfect time of year for a nice, cool fall race. This year was a different story though. We’d been stuck in a heatwave for at least a week. We were looking at potentially breaking a record the day of the race. The good thing is that at least I was acclimated as much as I could be. I had made a point of going out to run when it was extra hot in the week or so leading up to the race. Still, as much as I tried to be prepared, it’s never ideal for me when it’s nearly 70 degrees at the start of a longer race.

As I jogged around to warm up, I noticed that people were walking around inside the gates of Meadow Brook Amphitheatre. The race starts along the main drive into the venue. I’m not sure why it was open, but since it was, I decided to go in and explore. Meadow Brook is one of my favorite concert venues, and it was cool to see it looking so peaceful as the sun was rising. Some people were using the restrooms and some were warming up by running around the grounds.

The Chevy group met for a photo at 7:45, then I wandered over to the start. 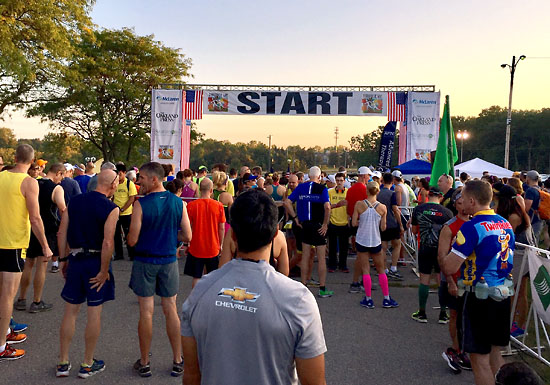 The first wave went off at 8:05, and mine followed a couple minutes later. It didn’t take long to clear the shade of the trees and get out in the open with the sun. Fortunately, the route only took us into the sun during the early miles when it wasn’t too hot yet. Entertainment was spread out every mile or so, including a guy playing bagpipes and local news anchor Stephen Clark’s band within the first few miles. Someone was offering cider and donuts to the runners which made me laugh. I don’t think that would sit too well. The first few miles start out downhill, then we got some shade as we ran along the flat Clinton River Trail for a bit. I had a Foo Fighters song running through my head at that point, so I got extra fired up when I passed a guy playing an acoustic guitar while singing a different Foo Fighters song!

Five miles into the race was the first taste of some hills, although minor compared to what was coming later. There was a quick trip through downtown Rochester and the park, then about a mile up Paint Creek Trail – the place where I run most frequently. That’s where we hit the halfway point and when I could tell I was slowing down. Even though the trail seems flat, there’s the slightest incline which I always feel when I’m already struggling.

I was happy to see Matt at the end of the stretch on the trail. Notice the smile on my face in his pictures versus the photo from the race’s photographer, haha. It was good to see him, and he stuck around long enough to catch some great photos of a couple other friends too. 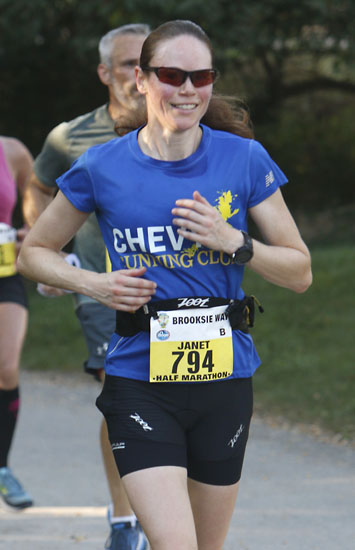 My smile didn’t last long because as soon as the trail portion ended, the real hills began. Even though I’d done repeats on the first big hill numerous times leading up to the race, it didn’t feel any easier. Running that hill seven miles into a race is a lot different from doing repeats on fresh legs. From that point on, the rest of the race was a struggle. I was running with a 21 oz. bottle of GU Brew and was trying to conserve some of it. I realized that I was thirsty and should be drinking more, so I started to grab water along the course as well. Since I tend to spill most of it when it’s in a cup, I only got a few sips here and there.

I was mostly in survival mode for the last five miles of the race, where the most challenging hills seem never-ending.

After the tenth mile I came across a guy handing out small bottles of water. He was a savior and I was finally able to drink enough. I knew that Roland from my work would be spectating somewhere after 11 miles, so looking for him helped distract me for a bit. He has come out to cheer for me each of the three years I’ve run the race which is so awesome of him. Seeing him made me smile – especially when he showed me that his shirt said “Run, Janet, Run!” The next day he told me that another woman named Janet ran up to him for a selfie. It was nice to have that little boost when I was struggling.

Knowing that I was nearing the end, I managed to pick up the pace. The uphill climb to the finish line was brutal, so it was nice to see my friend Jeff from work cheering me on. He didn’t get a smile from me at that point though – I was just hoping my final push wouldn’t give me a heart attack! Somehow I faked a smile for my finishing photo though.

This was a rough one. A month earlier the Crim 10-mile had been an ideal race for me. I started slow, finished fast, and felt strong the whole time. This race was practically the opposite. A 20-degree difference in the temperature at the start was probably a part of it. I’ve had the heat shut me down in a couple races, and luckily that didn’t seem to be the case this time. However, I think the heat and hills together were a rough combination. Although I’m very familiar with the course, the five-year gap since I’d last done the race helped me forget just how hard it can be. My splits show how I dropped off during the second half. I didn’t look at my watch much later in the race because I really didn’t want to know how bad it had gotten. Based on how I felt, I thought some of the splits would have been a lot slower than they actually were! 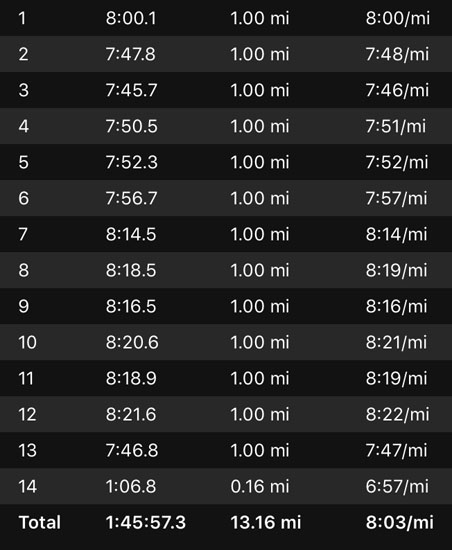 When I saw that my final time was just under 1:46, I was pretty happy. It was similar to my 2012 time. I knew I should be happy with the results on a hard day, on a hard course, without having followed a training plan to truly prepare me to run a half. I was also pretty thrilled to see that I was fifth in my age group. When I race distances much longer than 10K, I usually don’t place within the top 10. We don’t have results for the Team Challenge yet, but I’m hopeful that my placing will help one of our Chevy teams score well.

I took my time walking through the finishing chute and picked up a Rice Krispies Treat, granola bar, bag of pretzels, etc. A free photo booth was available so I got in line. It was a very slow line and I waited at least 20 minutes, but caught up with my running friend Carmen (read her post about the race here) as well as Jeff and Jenny while I waited.

The photo above was texted to me within a minute, then I finally made my way to the Team Challenge tent. It’s definitely one of the perks of participating in the challenge. The post-race snacks at the finish line weren’t very substantial or filling, so it was nice to load up on some carbs provided by Rochester Mills.

I chatted with a couple from work for a while and eventually made my way to the post-race tent that was open to everyone. There was another photo booth there where they actually provided a physical print.

After spending a couple hours on site after the race, I finally headed home. Matt always picks up the best post-race treats! 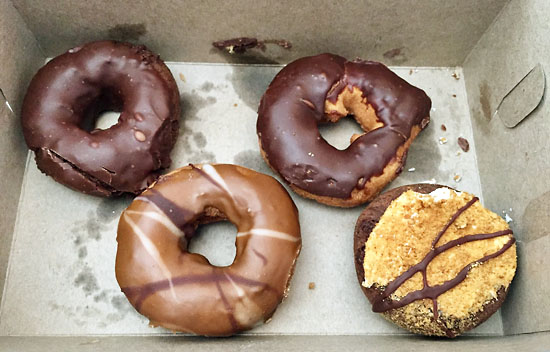 I was fortunate to have a lot of really solid races this summer, so I suppose I was due for a tough one. I know that the weather played a role in the struggle, so I’m happy that I did as well as I did considering the conditions. Even though I didn’t have the strong feeling that I did throughout Crim, I still feel like this was a successful race.