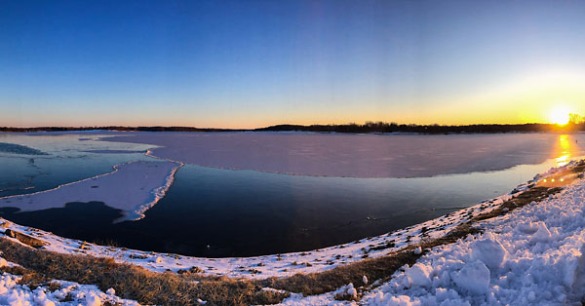 I’m approaching the end of my 14th week of training for the Glass City Marathon in Toledo and have about a month to go until race day. Things are going well, although tweaks, stiffness, and little pains have become more common. That’s one of many fun parts of marathon training. Nothing has been too serious or lasted more than a couple of days though.

This is the fourth marathon that I’ve trained for, and one thing I don’t remember experiencing before is night sweats. One week when my mileage had increased quite a bit, I woke up a couple nights in a row covered in sweat. A few days later I happened to come across an article about weird things that happen to your body when you run a lot, and night sweats was one of them. Pretty interesting! Luckily as your body adjusts to the training, that stops.

Aside from that, things have been pretty typical. I eat all the time, so I haven’t really been crazy hungry. I don’t think I’ve given myself a chance to get hungry since I’m always snacking on something. I’ve only gotten really thirsty a few times, and I think it has usually happened the day after a really long run when I didn’t rehydrate enough.

One tricky part of marathon training is trying to determine when I should run through the aches and pains and when I should take some time off. It’s important to become accustomed to running on tired legs. At the same time, I need to make sure that I’m not pushing through something that could leave me injured. I’ve only taken an extra rest day once in recent weeks. My legs weren’t just tired – my shins were sore and one ankle/shin felt tweaked and locked up. It wasn’t worth the risk, so I skipped a short run on an easy day. I’ve also had knee pain related to my IT band a couple times. It first popped up at the end of a 19-mile long run. It came back the next day a couple miles into my easy recovery run. It was bad enough to shut down the rest of the run. Since then, I’ve been extra diligent about doing hip/glute exercises, foam rolling, stretching, etc. and have managed to keep it at bay.

Getting off of the pavement is one way I try to avoid beating myself up too much. I keep the treadmill in the mix quite a bit. I’ve gotten out to the track a few times recently as well. The softer surface sure is nice, and I seem to hit faster paces more easily on the track. 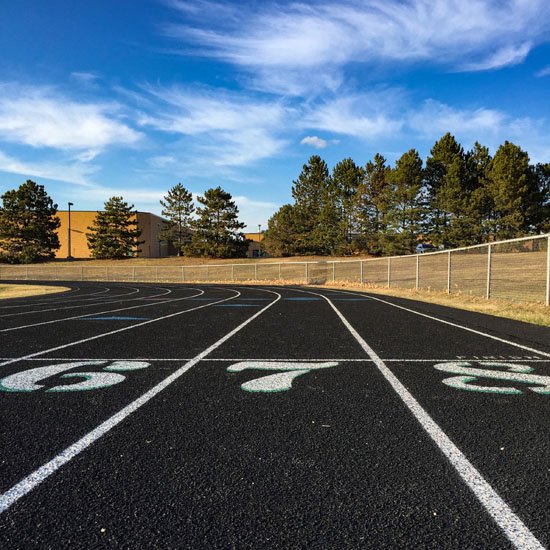 A warm & beautiful day on the track 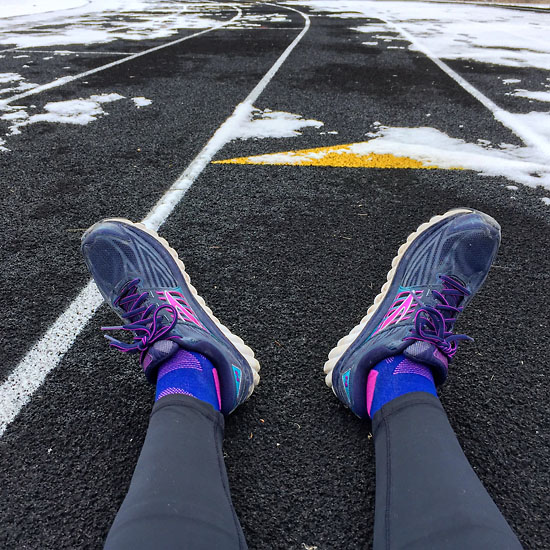 A not-so-warm or beautiful day on the track

I love running on our local rail-to-trails as often as I can, but they’re not ideal during the winter. They’re pretty sloppy this time of year. Once most of the snow had melted, I thought I’d give it a try. I found that the surface was all across the spectrum – totally dry and clear in some spots, damp and muddy in some spots, and patches of snow and ice in other spots. In those conditions, I usually only ventured out on easy days when I was willing to splash through mud. Luckily, the conditions have improved recently and I’ve been able to get out there more often. 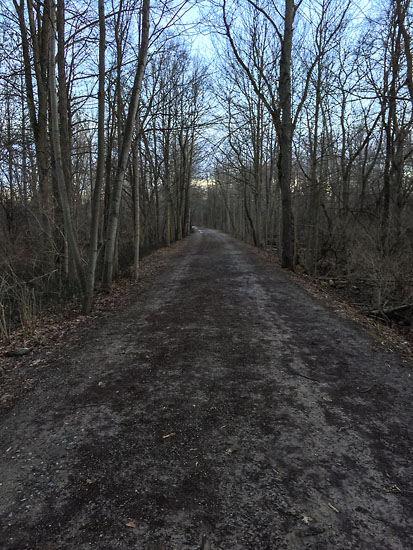 Paint Creek Trail is nice and clear for this stretch 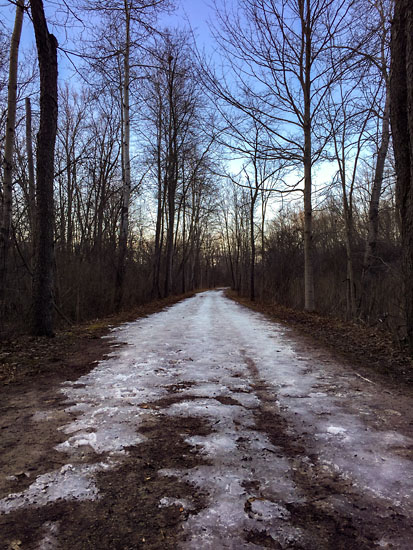 I realized Macomb Orchard Trail (which is paved) is a good spot for some flat and fast miles when the unpaved trails are too sloppy. I’ve done nine and 10-mile marathon pace runs there in recent weeks. I still need to work on slowing down so I hit my actual goal marathon pace. It feels good to get through the runs a little faster than planned, but at the same time, running each mile a few seconds too fast will add up over 26 miles. I don’t want it to come back to bite me in the late miles of the race. 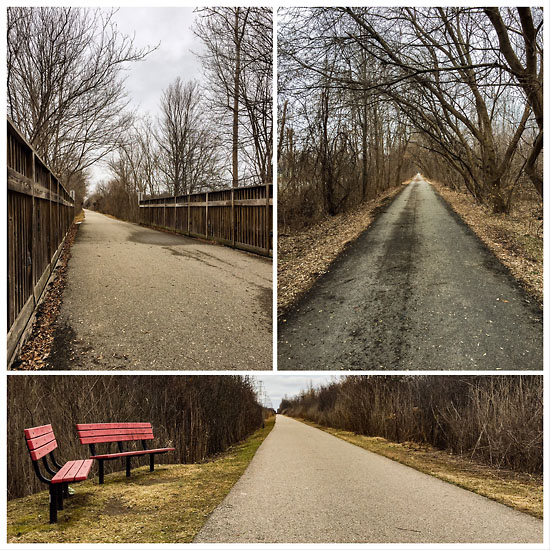 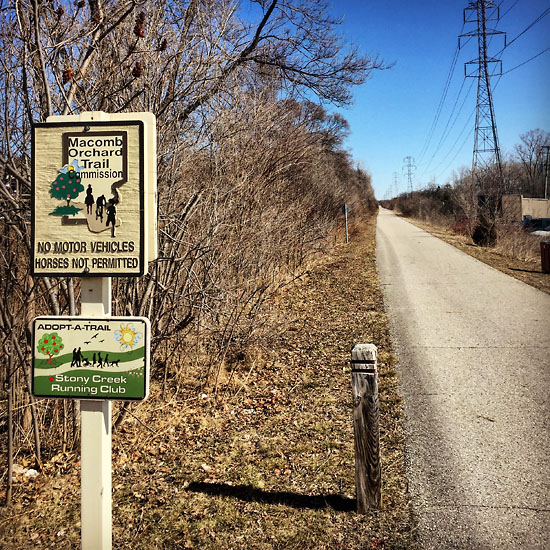 I’ve been able to hit my goal paces successfully for every workout, whether it’s been the marathon pace runs, speed work, or strength work. That assures me that I’m aiming for the right goal!

My long runs have gone well for the most part. Week #10 I ran 19 miles, and weeks #11 and #13 I ran 20 miles. The 19-mile run was not great. The wind was a steady 20 mph with gusts that were stronger, I chose a hilly route, and my IT band got angry by the end. On top of that, I had bad stomach/bloating pain that got worse throughout the run. As if running 19 miles isn’t hard enough when I feel normal! I made it through with a decent average pace, but it was a pretty miserable run.

Fortunately, my 20-mile runs were much better. Most of that was thanks to the company of my new running buddy, Kurt. I actually met Kurt thanks to Instagram. I found him because he had mentioned the Glass City Marathon. I saw that some of his paces were similar to mine, although he’s really a bit faster than me. He also seemed to have similar workouts. He sent me a message one week asking if I’d want to run our first 20-miler at Kensington Metropark. I’d already been thinking about going to Kensington, so it worked out perfectly. I’d never run there before and the change in scenery would be helpful. I run solo the majority of the time, so it was really nice to change things up and have some company. The miles went by quickly with someone to talk to, and it’s nice to have someone to keep you going during the rough stretches that can come and go during a long run. Because our first 20-miler went so well, we ran our second one together as well. Kensington is a beautiful park, but it sure is challenging. I thought Stony had some good rolling hills, but now I realize that Kensington’s got it beat! Hopefully Toledo’s relatively flat course will seem like a breeze after training on the hills. Next week will be my third and final 20-mile run, and hopefully Kurt and I do as well as we did the first two times. 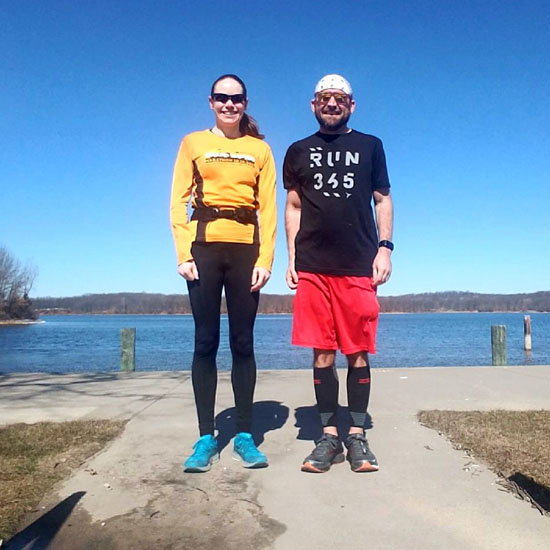 This past week I remembered the concept of cumulative fatigue and learning to run on tired legs. With all of these miles adding up, even my easy days haven’t felt so easy. My shortest runs were five miles this week, and both Monday’s and Wednesday’s runs felt long and slow. They’re supposed to be slow, but I *really* felt it. Somehow my legs have still managed to pick up the pace on my faster days though.

Some new gear has kept training exciting. When I saw that I could get 30% off Garmin watches through work, I jumped at the chance to finally upgrade to the nice triathlon watch I’ve been eyeing. Now I can use one watch for both daily wear and all of my workouts. I also have heart rate info – something I’ve never had before. So far I haven’t used that information during runs, but it’s interesting to review afterward. Now that I’ve spent a week or two with the watch and have run a variety of paces, it seems like I’m hitting the proper heart rate zones. That’s reassuring.

With all of the miles I’ve been putting in, I realized I might need a new pair of shoes before the marathon. I just got my second pair of the Brooks Levitate and I’m looking forward to getting some runs in with these beauties! 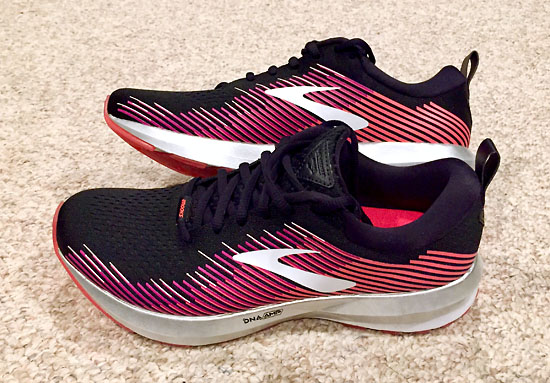 Aside from running a zillion miles, I’ve been keeping up with swimming three days a week and strength/weights once or twice a week. This weekend is a “down” week when it comes to mileage, so I’m going to squeeze a unique race into my schedule. It’s an Aqua Dash, which will involve 20 minutes of swimming in a pool then 20 minutes of running on the treadmill. I’m looking forward to getting a little taste of multi-sport action again, and having a chance to put my swim training to use.

I’m coming up on the home stretch now and just have to hang in there for one more month of training!