I’ve spent the last 18 weeks training for the Glass City Marathon in Toledo, Ohio and it’s almost time to wrap things up. I have a couple of rest days, two miles to run on Saturday, then Sunday is the big day. Today I read through some of my training log to reflect on all of the hard work I’ve put in and to help remind myself that I’m ready for this.

As of today, I have run 685 miles over the last 18 weeks. The total will hit 687 miles the day before the race. I cut biking out of my routine for the most part, but still got 72 miles in. I maintained my swim routine and averaged around three miles per week, resulting in a total of 57 miles of swimming.

It’s been quite a ride. I ran 31 miles the first week of training and peaked with a couple of 55-mile weeks. Aside from adding a few additional rest days, I followed my plan very closely. Of course not every run was a great one, but I nailed all of my speed, strength, and marathon pace runs and feel like I had a really solid training segment.

It sure wasn’t easy training through this winter. Even now that it’s supposedly spring, we’ve still had plenty of winter-like conditions. An ice storm this past weekend sent me to the treadmill for my last longish run of eight miles.

Looking back through my training log reminds me of how many snowy and cold runs I battled through. The extreme temperatures that were cold enough to freeze my water bottle were especially bad, as was my 16-miler when I trudged through the snow with little traction. 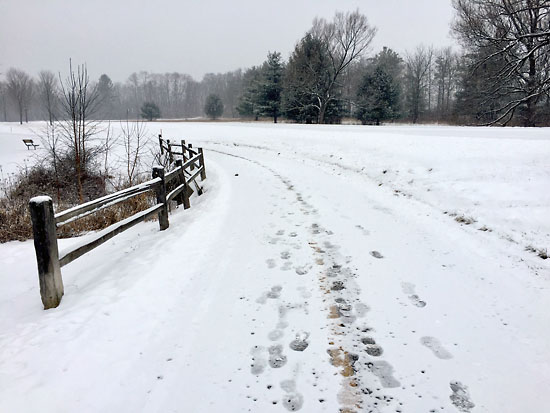 Fortunately, there have been a few hints of nicer weather for a day or two here and there. Although I’ve had a few sloppy runs through the mud on Paint Creek Trail, I’ve been able to get out there more regularly lately. It’s still a bit rutted and uneven, but it’s nice to have an unpaved, flat surface where I can mostly avoid the traffic. 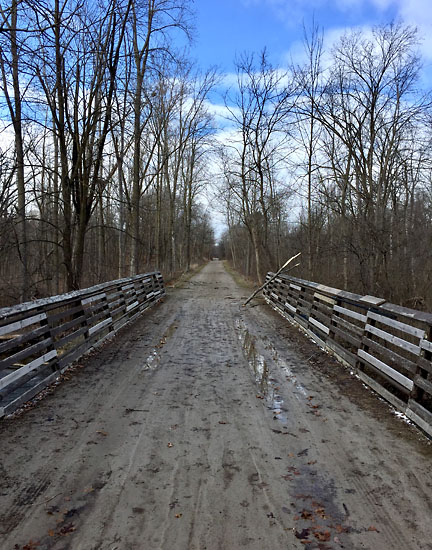 Running a pretty solid half in the Columbus area was one highlight of training. I also enjoyed finally getting out to Kensington Metropark for a few runs, especially since I had the company of my new running buddy Kurt.

Of course things went fairly smoothly for most of my training, then I worried that everything would fall apart in the last couple weeks. My left leg has been stiff for the last month and sometimes it locks up for random steps while walking around. That seems to be amplified on the treadmill. While my tolerance for the treadmill is usually pretty good, I’ve struggled with awkwardness on it this past month. I’ve tried to run outside as much as possible to get a more natural stride rather than being forced into it.

On top of that, one morning a couple weeks ago I woke up with pain on the top of my foot. It was eerily similar to what I felt when I had a stress fracture. I cut one run short when I felt some twinges of pain from that foot. I started to freak out and worried that I’d made it through 16 weeks of training and would have to bail on the race. I took a couple days off and luckily I seem to be fine. As that worry faded, a couple other little tweaky things popped up. Nothing has been serious though. I’ve been to my chiropractor a few times over the last couple weeks and he has magically found trouble spots I didn’t know I had.

Now that I’m a few days away from the race, I’m getting antsy. I’m still riding the high of Monday’s Boston Marathon results. I was SO excited to see local runner Des Linden get the big win that she’s worked so hard for.

Matt and I with 2018 Boston Marathon champion (!) Des Linden. This picture is from the Richmond Marathon expo in 2015.

I’m always super inspired and motivated after watching big marathons on TV. The timing worked out this time around because I actually get to run one while the inspiration is still so fresh. It’s giving me an extra boost of excitement for this race.

With the exception of some of the nasty sub-zero winter days, or running 17 miles on the treadmill to avoid slipping on ice, I’ve really enjoyed the whole training process. There’s a sense of accomplishment that comes with each run. Maybe it’s even more empowering and meaningful when I remind myself that I’ve made it through despite some tough conditions. The training segment has been a great journey, and I hope that everything comes together on race day. So far the weather forecast shows that it will be cool and dry. The conditions look similar to what we had when I ran the half marathon there in 2015, and that race still stands as my current PR. Hopefully I’ll come away from Toledo with a PR in the marathon distance too!