2018 was a pretty solid year for me in terms of training and racing. It is the ninth year I’ve participated in races. With 16 total races, it’s the most I’ve ever done in a year, topping last year by one race. I didn’t get any new PRs, but I did improve my times at a few races that I’ve done in the past. It was the first time I ran two marathons in a year, and I was fortunate enough to run Boston-qualifying times at both races by 5 1/2 minutes. That was enough buffer to successfully get into the 2019 race. I keep aiming for the goal of a 3:30 marathon, but 3:34 seems to be my sweet spot. I tend to be ridiculously consistent with my times, which was clear when I ran 3:34:25 in Toledo in April and 3:34:30 in Indy in November. Although the 3:30 goal continues to be elusive, I was thrilled to run two great marathons this year.

Aside from qualifying for Boston and trying for 3:30, I didn’t have many big goals going into this year. As usual, one of my goals was to remain injury-free. For the most part, I was successful. I’m super paranoid about the foot that had a stress fracture in 2016 because it set me back for quite a while in both 2016 and 2017. I took a couple of short breaks this year when my foot got achy, and luckily that was enough.

I wiped out when I was running on a mountain bike trail in mid-October, leaving me with an angry knee. It lingered for a bit and I took some time off to deal with that, but fortunately it wasn’t too serious.

One thing that has been problematic for me this year is my left hip/groin area. Back in March or April I started to notice that my leg would randomly lock up while walking. Somehow it has rarely been a problem when I run unless I use the treadmill. I reached a point where I could only make it 2-3 miles on the treadmill before it started to hurt. As a result, I’ve only used the treadmill seven times since April, and I think the longest I’ve pushed it was four miles. I haven’t had it officially diagnosed, but one doctor mentioned the possibility of a hip labral tear. I’m afraid I can relate to many of the symptoms. As long as I stay away from the treadmill, I’m mostly fine. I have a feeling that training on the treadmill so much last winter may have created the problem.

Otherwise, it was a good year. Here are some stats: 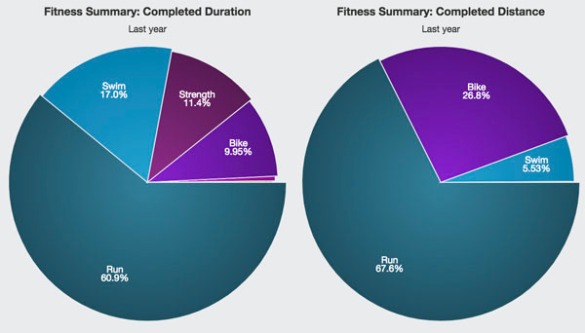 I definitely had plenty of variety! Although I returned to several races that I’ve done in the past, I made a point of doing a bunch that were new to me. I believe this is the highest running mileage I’ve done in a year. Running two marathons certainly contributed to that. The more I run, the less I bike, so my biking segments during triathlons weren’t especially great. I’m okay with that though since I’d rather spend my time running. I’ve also enjoyed maintaining a regular swimming routine, aiming for at least a mile three days a week. 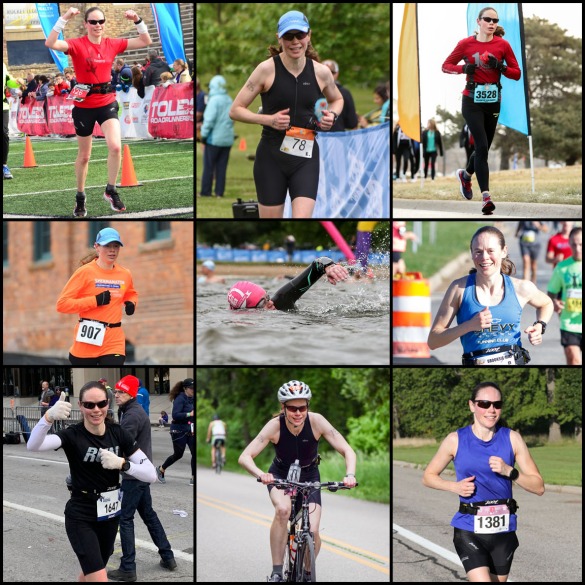 A sampling of some race photos from 2018

Looking ahead to 2019, I’m excited to run my first big-city, major marathons. I’m registered for both Boston and Chicago. The Twin Cities Marathon is the largest one I’ve done and it had fewer than 10,000 finishers. Boston should have around 30,000 people and Chicago around 40,000, so it will be quite a change for me. I’m really looking forward to the atmosphere of both races. I’m sure I will hit plenty of shorter races before and after the marathons, and I’ll look forward to another summer of multi-sport events as well. I’m excited about a swim/run series that will occur a few weeknights during the summer. I can concentrate on combining my two favorite activities and subtract the bike segment! I’m also toying with the idea of finally trying a 5K open water swim. I’ve been intrigued by it for several years, and maybe this will be the year I finally do it.