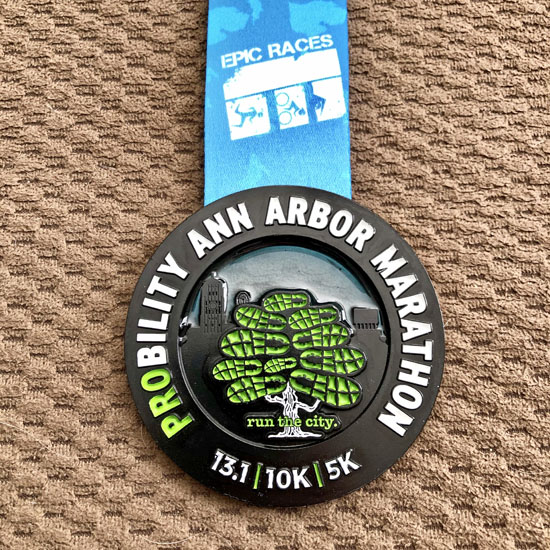 Thanks to the coronavirus/COVID-19 I ran my very first virtual race on Sunday, March 22nd. The thought of doing a virtual race has never appealed to me. I already have a zillion race t-shirts and medals. They provide memories of experiences, and if the experience wasn’t anything special and I didn’t physically race at a certain location, they don’t mean much to me. However, we’re living during a time when all of the races are being canceled or postponed and there aren’t many options.

When I signed up to run the half at the Ann Arbor Marathon, I planned for it to be a training run that would help me build my mileage for the Twilight Zone 6-hour run in May. I went to school in Ann Arbor but didn’t run at the time other than a couple miles now and then on the rec center’s indoor track. I’ve thought about how it would be nice to see the scenery all over Ann Arbor and remind myself how much I love the town. I’ve considered the race for years and it finally fit in my schedule.

When the coronavirus started to shut everything down it became clear that this race would not take place. Epic Races was kind enough to offer a few options. I could defer my entry and run next year. I could transfer to one of their other races this year. Or I could do a virtual race. I didn’t want to defer to next year because I’m not sure what my goals may be next spring. I didn’t want to already lock myself into something that might not fit the schedule later on. I thought transferring to another race would be ideal. Eventually three more of my races were canceled or postponed. A ton of races are being rescheduled in the fall. If I transferred to another Epic race it could potentially conflict with something that hasn’t been rescheduled yet. That realization made me start to consider the virtual option.

Ultimately, my sympathy for all of these poor race directors is what made me choose the virtual option. They’re stuck with a bunch of useless shirts and medals. They’ve invested so much time, money, and hard work into planning these events. They’re in a really tough spot and I feel bad for them. Although it’s not too likely that I’d choose to do a virtual race otherwise, this was a unique situation and felt like it was the best choice. I switched to the virtual race a couple days before the “race day” and received my swag in the mail a few days later. 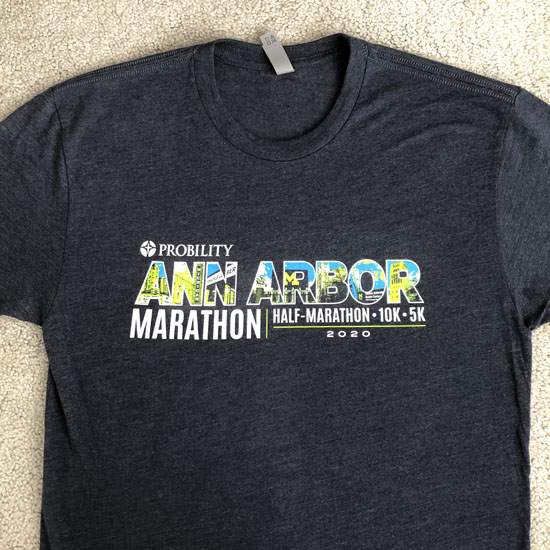 In addition to the shirt, medal, bag, and sticker, I also received this Buff. I found Buffs to be useful this past winter when I frequently used them for headbands or balaclavas.

I decided to do my virtual race the same day that I would have actually raced. I chose to go to Stony Creek Metropark because I could run loops continuously without having to worry about stopping at crosswalks. I wore my new pair of Brooks Hyperion Tempo shoes that are billed as a “speed” shoe. 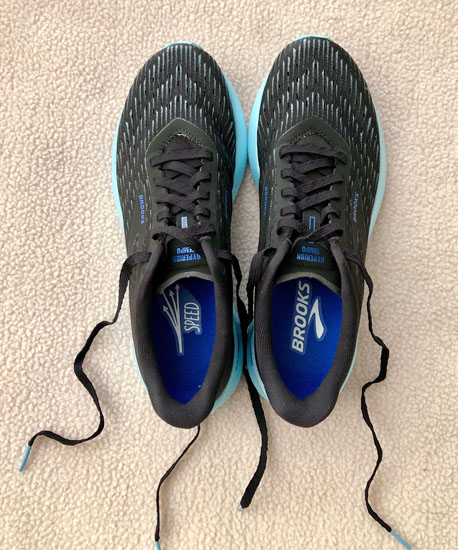 I have been concentrating on endurance for the last five months or so since I knew I wouldn’t be targeting any kind of speed at my 50K. I’ve picked up my pace a little bit during a few recent runs but I have rarely run anything much faster than marathon pace. I thought it would be a good chance to push myself but really had no idea what to expect. I had run eight miles at marathon pace earlier in the week. Maybe there was a chance I could try to do that for a half marathon? I thought that might be optimistic though.

It was a cool morning in the 20s with sun and fairly minimal wind. It was a great day for a good effort.

I decided to do two 6-mile loops around Stony’s path and keep going an extra 1.1 at the end. I’d just do a cool down jog or walk it in at the end instead of doing an out and back where I’d have to stop and turn around. I opted to run two clockwise loops which meant that I’d start on the flat stretch rather than climbing up a hill at the beginning.

I didn’t have big expectations because the race atmosphere provides an energy that doesn’t exist when I run on my own. It’s easy to get swept up into a fast pace when there are a bunch of other fast people to follow. I took off and I think in addition to running the flat stretch for the first mile or so, I also had the benefit of running with the wind at my back. It was minor but it was still something. I kept looking at my watch during the first mile and wondered how I was running a pace in the 7:30s to start. I had only run about one mile that fast recently. I thought I could be setting myself up for a rough finish. Maybe I could pull off a 10K at that pace, but not more than double that distance.

I ran 7:28 for my second mile and 7:38 for the third. I thought I was really pressing my luck. I was averaging the goal half marathon pace I run when I’m in top shape and specifically targeting that distance. I realized that maybe the fast start had set a rhythm for me and somehow I was maintaining it. Things get more challenging halfway around the Stony loop though. I always feel the climb somewhere during the third mile through around 4.5 miles. Although the wind was minor, that’s where I could also tell that I was running against it. I slowed down a little bit but told myself that my pace would pick up once I ran downhill and back onto the flat stretch.

One loop down after six miles. I just had to do it again and finish strong for a little bit extra. Once again, my pace was pretty good for the first couple miles of the second loop before I started to slow a bit. I knew the wind and hills would be hard for a stretch and I just had to fight through before I’d pick up the pace again. I also told myself that ideally I’d be around an 8:00 pace if I wanted to run marathon pace. I was already well ahead of that goal, so even if I slowed down through the end I should be able to manage that. I got through the harder segment, used the momentum of the downhill stretch, and had dropped the pace pretty good for the last mile of the second loop. Now I just had to push with everything I had left for an extra mile. Keeping it up for “just a mile” was pretty challenging at that point though. Most races end up a little bit long unless you run the tangent for 100% of the course. I decided to be extra nerdy and add that little extra to my run as well by going just over 13.1 miles. That way I could convince myself that I had legitimately run a full half marathon course. 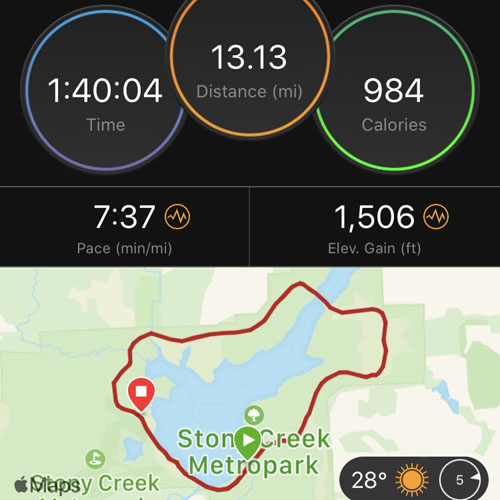 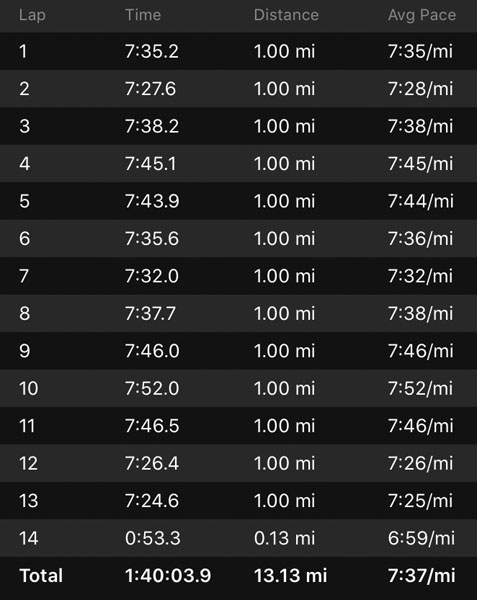 I was really excited when I realized how close I had gotten to my PR. How did I do that?? I managed to pull that off without a race environment OR proper speed training at the end of a 60-mile week! It convinced me that running such high mileage in preparation for the 50K must be working in my favor. Even though I haven’t been testing my speed lately I guess it’s still there. I must be building enough strength with my high mileage to go fast when I actually try.

Wearing some of my University of Michigan gear helped me get into the spirt of the race despite not getting to run in Ann Arbor. Running such a fast time helped me feel like this “race” was actually worthwhile after all. Although I may not have been too excited about the idea of a virtual race, we’re going through a unique time that will make this one memorable and it’s a bonus that I came away from it feeling so accomplished.