A week after my first triathlon, I was ready to try another. A sure sign that I’m getting hooked? Anyone Can Tri (June 30th) was another good one for beginners and was a regular sprint distance while my first one was a bit shorter. This one had a swim of 400 yards, 20K on the bike, and a 5K run. One thing that drew me to this race was a pool swim. I figured I’d maintain a better rhythm in the pool because I wouldn’t have to look up every few strokes to avoid crashing. I also heard that the area was very flat for the bike and run – bonus!

The race was held at Lake St. Clair Metropark, which is also known as Metro Beach. I’d never been there and was looking forward to checking out another metropark. All I knew about the place was that I often heard that the beach was closed due to E. coli. Good thing the swim was going to be in the pool! I had no idea there was such a big pool at the park.

A very nice pool at this park

Once again, Matt was willing to get up at the crack of dawn to come along. He took most of these awesome photos. We got to the park around 6:30 because the transition area was supposed to close around 7:30.

Possibly my last tri with the trusty old Schwinn?

I checked in then set my stuff up in the transition area. Unlike my first tri, this one had a ton of extra space on the racks and my bike wasn’t right on top of someone else’s.

There was kind of a race meeting, but it was nowhere near as detailed as the one at my first race. We all gathered by the pool and they ran through who was going where and doing what – in addition to the triathlon there was a duathlon. They had the tri people line up in groups based on pace for the 400-yard swim. I figured I’d be around or just under 8 minutes, so I went with that group. Lanes were roped off with yellow flags, and we were to swim serpentine style – down one lane, duck under the flags and swim back down the next lane. The race started and the first person crossed the timing may and jumped in the pool. It was kind of weird to jump in like that and just go. 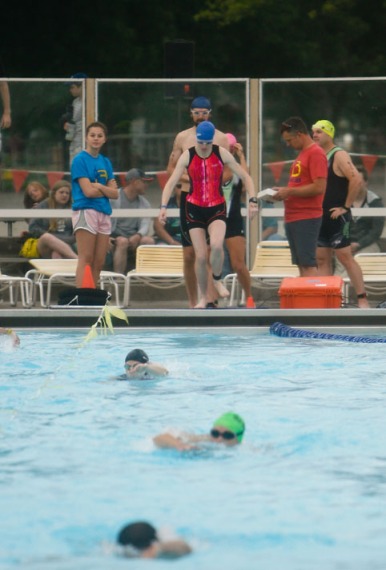 My turn to jump in!

Someone in my group had gone in the pool earlier and said it was really cloudy. As soon as I started, I understood. No crisp view down to the other end. Of course it was better than swimming in open water, but way cloudier than the pools I’m used to. Probably because this pool typically has a bunch of kids and needs to be loaded with chemicals! I realized halfway down the first length that I hadn’t started my Garmin yet, so I just started it late.

I figured I wouldn’t be able to pull off a flip turn and make it into the next lane without snagging the flags in the process. I saw someone else get tangled up and decided not to even attempt it. Soon, I didn’t have to worry about it because things got so congested it wasn’t an option anyway.

I may have made it through two or three lengths before things got crowded. Apparently staggering people 15 seconds wasn’t enough or people didn’t seed themselves right because a group of us got pretty bunched up. The lanes were wide enough to pass, but eventually people were swimming 2-wide in front and behind me and there was nowhere to go. I was at the mercy of the people in front of me, and people behind me were right on my feet as well. 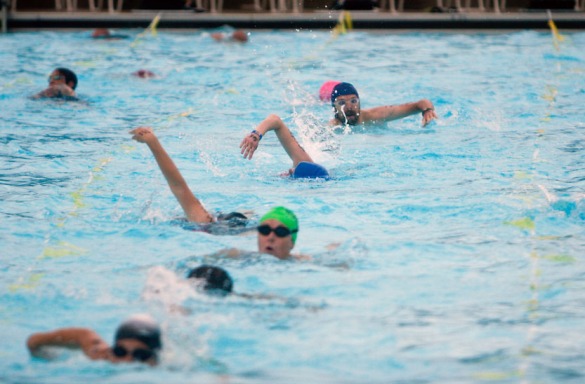 The swim starting to get congested

I ended up swimming breaststroke at times so I could see where I was going and to prevent myself from hitting people’s feet with my hands. Several times I had to stop and kind of stand in line at the wall. It got too crowded to keep moving smoothly as people switched to the next lane. So much for the nice pool swim – it was kind of a disaster. At the end, we climbed out of the pool and ran over a timing mat as we left the pool area. It wasn’t far, and my pool split was 11:41. I knew I was capable of at least 8:00, so that tells you what a mess that swim was. Ugh! Luckily the rest of the race was much better.

Running from the pool to the transition area

I ran down the sidewalk to the transition area, where my split was 2:34. I struggled with my socks and was kind of slow. I took off on the bike for 2 loops down Metro Parkway. They closed the inside lane of the road for us which was nice. I glanced at my watch and realized something was off. It wasn’t in bike mode – I think it was in the second transition instead. I don’t remember what happened because I never think clearly during races, but I think there was possibly another timing mat as I went into the transition area. I think I hit my watch for T1 as I left the pool, started the bike on my watch as I actually entered T1, then it went to T2 as I started the bike. Who knows for sure, but I gave up on trying to track the bike on my watch. The route was totally flat which made it less of a struggle for me. I switched my bike to a lower gear at the end of the ride in hopes of having slightly fresher legs when I started the run. The bike took 47:05, or just under 16 mph. 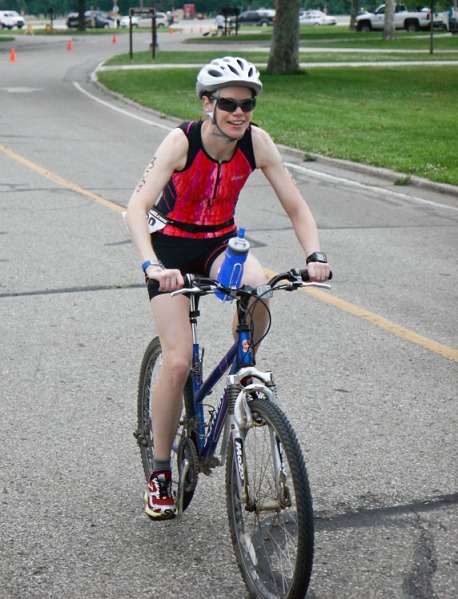 Smiling because this bike ride was nice and flat!

T2 took 38 seconds, then I was off for the 5K. My legs did feel better than usual, though I felt it near my knees a bit. Maybe it also helped that I took two days off from running before this race. We ran down some sidewalks through the park, passing stuff like a big shuffleboard area and a playground.

Running past the pool during the 5K

Early on in the run, I realized my watch was still screwed up. It was tracking time, but not distance. I don’t know how I screwed up so bad. I’m glad signs were posted marking the miles, and I tried to pick it up at the very end.

Pushing it for the last 0.1

There was a table with some fruit, bags of chips, and stuff like packages of cheese crackers. This race was all about getting people out to try a triathlon, so it was not competitive and there were not any awards. Once the transition area opened, people could leave. We waited long enough for the results to get posted then took off.

Following this race, I didn’t feel like it was as difficult as my first one. It was longer, but it was truly flat and it made a difference. Rather than just surviving the run, I had a good effort. My legs were a bit more sore afterwards though. I decided it was really time to get a new bike now that I know I’m going to stick with this. I don’t know how much the mountain bike has been holding me back, but I’m sure it’s a good amount.

After this race, I may be reluctant to sign up for a race with a pool swim again. That was such a mess. I also need to remember to start my watch and pay attention when I hit the transitions. I may consider another tri towards the end of July or in mid-August. The next step now is to master a new bike and step up that portion of my races!

5 thoughts on “Anyone Can Tri race recap”