Another year has come to an end and it’s always fun to look back and reflect on everything. This was my fourth year of participating in races and was easily my best yet. It was a year with a lot of firsts for me – I wrote my first blog post, I did my first triathlon, and I ran my first marathon. At the start of the year, I had a couple of goals in mind. I wanted to venture into triathlons and I wanted to take things a step beyond a half marathon by running a 25K. Little did I know that I’d end up aiming for a marathon as well.

The first real goal of the year was to finally try a triathlon. I’d gotten back to swimming near the end of 2012, I’d been biking a little bit, and obviously I had the running thing down. I took things slowly, starting with a short indoor race in March at the Life Time Fitness in Rochester Hills. 10 minutes of swimming in the pool, 30 minutes on a spin bike, and 20 minutes on a treadmill seemed very doable and gave me the courage to give it a shot. It was a lot of fun and I was surprised to find out that I was the female winner! I realized that doing so well in my first attempt was a sure sign that I should really get into triathlons. 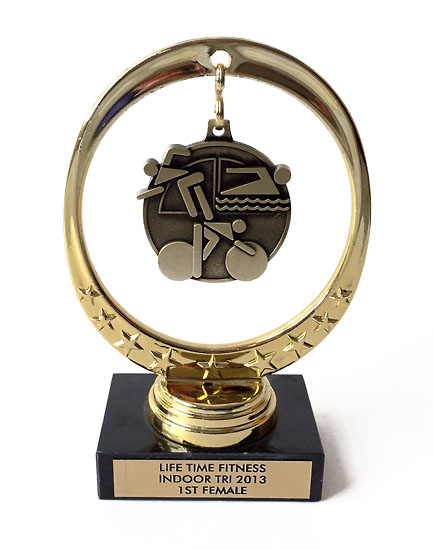 A nice award for my first triathlon

I followed that up with three outdoor triathlons this summer. Again, I took things slowly with my first “real” one and did the First Try Triathlon in Linden. It was a great introduction to triathlons and was very beginner-friendly. It was considered a “mini-sprint” distance since it was a little shorter than a typical sprint race. I’m really glad I chose that race for my first real experience. 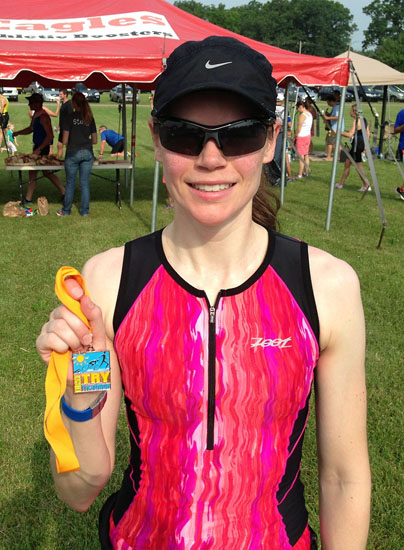 I finished my first real triathlon!

I did my second tri at Metro Beach and my third in Clarkston. All of the tris were a fun challenge and I really enjoyed them. By the middle of the summer I had started marathon training, so it got tricky to juggle training with triathlons. Trying to do long runs the same weekend as a triathlon was not ideal, so I called it good for my first year of triathlons and vowed that I’d do more in 2014. 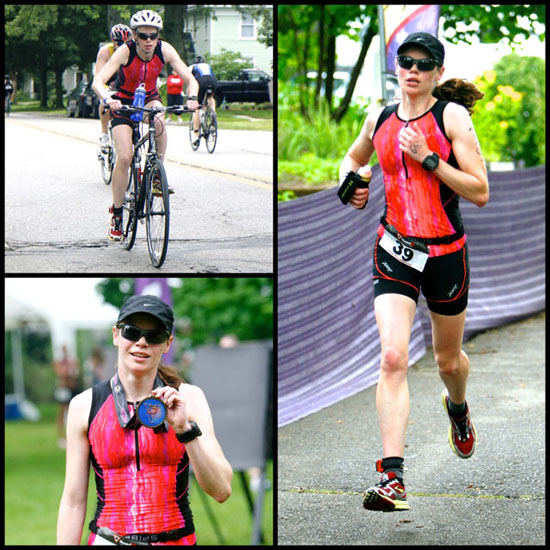 Pictures Matt took at the Village Triathlon in Clarkston

On the running side of things, I got a new 5K PR in March then again in June. I managed to hover right above or below 22 minutes in two races, with one race being a little long and the other being a little short. I guess I technically broke 22 minutes, but next year I’ll see if I can do it by a little more to convince myself that I’ve legitimately broken that 22-minute barrier.

May 11th was the big day I really trained for all winter and spring – the Fifth Third River Bank Run 25K in Grand Rapids. I had run three half marathons in 2011 and three in 2012, so I felt ready to jump a couple more miles in distance and try racing 15.5 miles. I had a great training segment and it ended up being one of the most successfully-executed races I’d ever run. I took things a bit easy for the first half of the race, then stepped up for the second half. I got faster and faster during that second half, broke my half marathon PR within the race, and felt so strong at the end that I was running at 10K pace for the last couple miles! I was thrilled with how the race had gone. 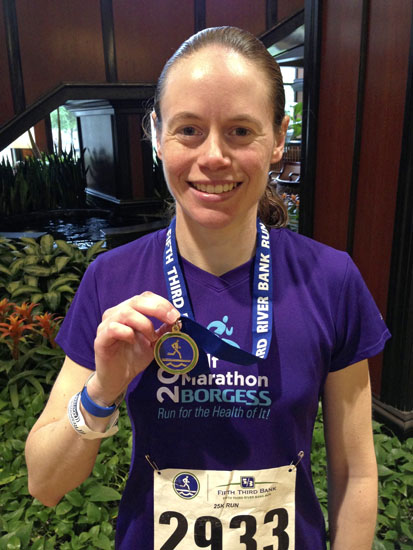 After the River Bank Run

I couldn’t believe that I felt that strong for 15.5 miles. It really gave me a boost of confidence and led to toying with the idea of a marathon. I had never seriously considered running a marathon because it kind of seemed crazy and torturous to me. I never really had the desire to try a marathon. After dealing with shin splints for so long, I wasn’t sure my body would want to go through that kind of training. However, the 25K went so well…

I started to look into potential fall marathons and Grand Rapids stood out as a good one. It was small, some of the course was the same as the 25K, it was billed as fast and flat, and I’d heard nothing but good things. I kept debating if I really wanted to do it, and at some point I finally broke down and decided to go for it. Being super ambitious, I decided to follow Hal Higdon’s Advanced 1 training plan. Obviously I was not advanced when it came to running a marathon, but the advanced level incorporated the kind of speed and tempo workouts I’d already gotten used to running. I followed the plan pretty closely and training went great. Aside from developing a sore hip a couple months in, everything went as planned. I ran the Romeo 2 Richmond Half Marathon in the heart of marathon training and officially broke my half marathon PR by about two and a half minutes.

When October 20th rolled around, I was ready. The Grand Rapids Marathon was a great choice for a first marathon and I had a great experience. Aside from knee pain for a few miles in the middle of the race and the struggle of getting through the last few miles, the race was great. My ambitious goal was to finish around 3:35, though I really wasn’t expecting to hit that on my first try. Finishing in 3:42 was awesome to me. Although I hurt everywhere when I finished, it wasn’t bad enough to keep me from considering future marathons. I had never seriously considered trying to run a marathon until mid-2013, but once I set my mind to it, I was all-in and I’m thrilled with how it went. 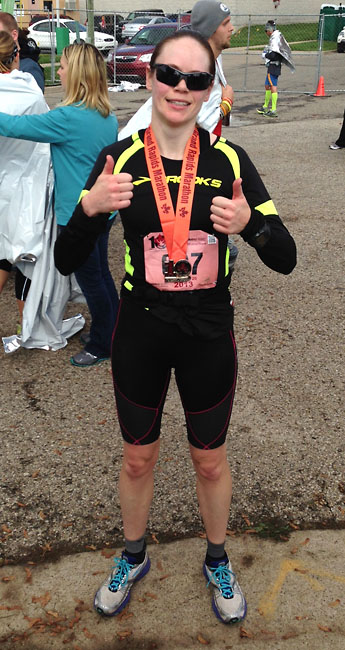 Before starting marathon training, I questioned how my body would hold up to training. Little did I know that it would be AFTER the marathon that I’d have to worry about. When I felt my left knee for a few miles in the middle of the race, it was surely the beginning of this ugly IT band issue I’ve been battling ever since. It’s been a frustrating struggle to get back to running. I’ve taken time off in the past to deal with shin splints, but the pain was never bad enough to shorten my runs. It was always the after-effects that really got me. Dealing with my IT band has been a whole new challenge for me. It’s the first real injury I’ve had that has really prevented me from running. I made six attempts at running in the six weeks following the marathon, and the pain in my knee never allowed me to make it much more than a mile. When the pain hits, it’s not something I can push through – I have to stop.

Several visits to Dr. Erik Barazsu at The Active Fix have helped me improve. I still can’t run as much as I’d like to, but I’m getting there. I’ve been hovering around a 3-mile plateau lately, making it as long as 3.75 miles a couple times. Most of my runs end when my knee hurts bad enough to stop me in my tracks, or when I’m smart enough to stop just before the pain gets that bad. In addition to going through active release treatments, I’ve started to do a bunch of stretches and exercises to work on my hips, glutes, and more. I made it up to 5 miles today and my knee was still okay, so I’m hopeful that things will look up heading into the start of 2014.

So far, I don’t have any races in mind for 2014. I’m going to take things slowly and see how recovery goes before I sign up for anything. If I get back on track, I may consider a spring half marathon. Who knows, maybe even a late fall marathon? In the meantime, I definitely want to aim for more triathlons this coming year. I found out pretty quickly that I’m okay at swimming and the run is my strong point, but I need work on the bike. I didn’t put nearly enough time in on the bike last year and I’m already working on that as this year wraps up. With a new stationary bike in our basement now, I plan on getting in a lot more miles. I’m thinking that I’ll try to do at least one Olympic-distance triathlon.