Kalamazoo’s Borgess Run for the Health of It! was my first half marathon (in 2011) and I enjoyed it enough to return the following year for my fourth half. I decided to go back this year on May 8th, making it my tenth half. It worked perfectly with both marathon training and Mother’s Day plans.

Kalamazoo is about two and a half hours from us, but Matt’s parents live about 20 minutes away. We headed out to stay with them on Friday night after I finished running seven miles at home. I was ready to fall asleep shortly after we got there, then had to motivate myself to run eight more miles the next morning. I must still be in winter running mode because 60 degrees that morning seemed hot! At this point I’m three weeks out from the Bayshore Marathon and wrapping up my peak mileage week of the training plan – a total of 63 miles after getting through 16 on race day. My legs were tired for both Friday and Saturday’s runs, but I know that should be expected.

After Saturday’s run, Matt and I went to Wings Event Center for the expo. We were happy to see that they had our sizes for the 2012 race shirt, which is one of my favorites. With a deal of three shirts for $10, I got one and Matt got two. Gazelle Sports had some apparel and accessories for sale. I bought some Picky Bars and Clif Shot Bloks. Green Strides was there to collect old running shoes, which helped motivate Matt and me to clear out our large collection. Literally a garbage bag’s worth and then some! 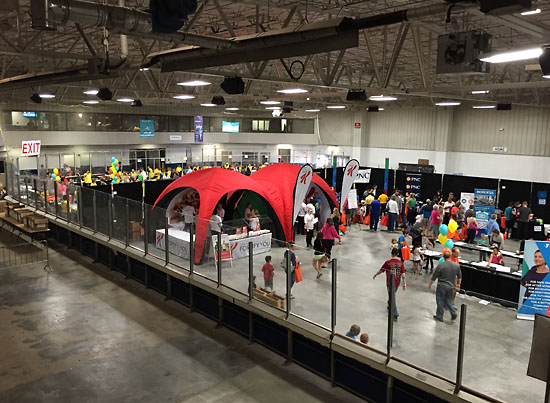 The expo at Wings Event Center 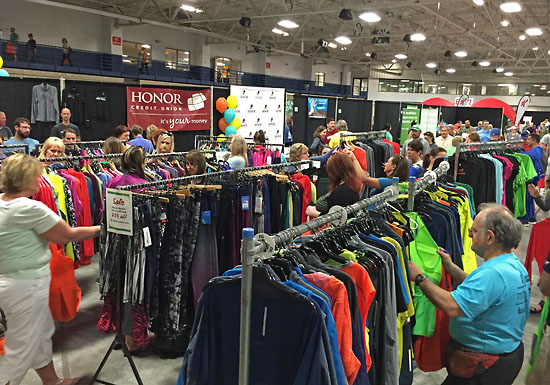 Gazelle’s area at the expo 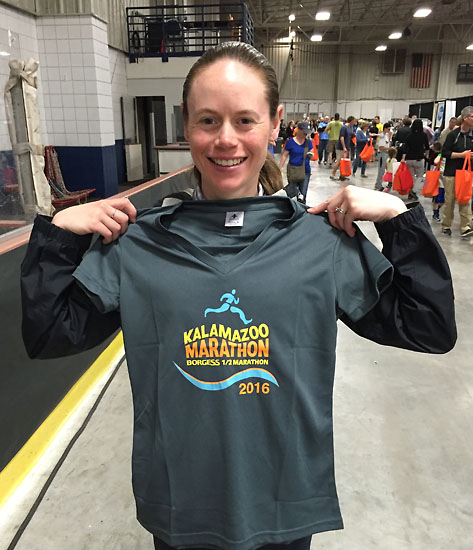 Posing with the race shirt

I spotted Don Kern at a booth for the Grand Rapids Marathon and wanted to let him know how much I had enjoyed his book and the adventure continues… He’s the director of the GR Marathon (amongst others) and his book about his various running adventures is extremely inspiring. Maybe I will spot him at the Bayshore Marathon in a few weeks. He said he’ll be there to celebrate his birthday the day before and Bayshore will be his 300th marathon the next day. Pretty awesome!

Noodles and Company had a “buy one bowl get one free” deal for racers, so we got lunch there. Later we had a nice family dinner to celebrate Mother’s Day, then I got a restless night of sleep. Not because of pre-race nerves, but because that’s how I seem to sleep lately.

I didn’t get nervous this time because I planned to use the race as my long run. If I followed my training schedule, I was due to run 16 miles at an 8:42 pace. That’s well off of my half PR pace, which is around 7:35 or so. No pressure!

We got to the race site at 6:50 (just over an hour before the first race) without a problem and parked in a grass field near the starting corral. We relaxed in the car for 10 minutes or so, then it was time for me to hit the porta potty, gear check, then start a 3-mile warm up. It was in the mid-40s which felt a little cool to start, but it was perfect when I got moving. We lucked out with a beautiful day! 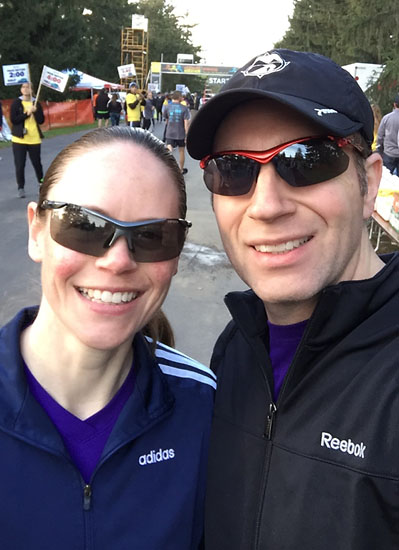 A pre-race photo with Matt, who ran the 10K

I finished my warm up and got in the corral with about 10 minutes to spare. I figured I might aim for around 1:50 and positioned myself appropriately. I worried I’d get cold or tighten up between my warm up and the start of the race, but I was okay. 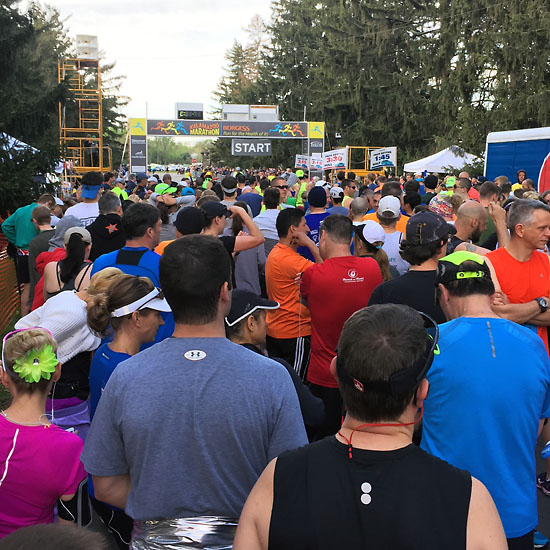 The half and full marathoners started together

The first couple miles went down the main road before we got to downtown Kalamazoo. The brief stretch through the pedestrian mall is always a fun and energetic stretch. Shortly after the 3-mile mark the half and full runners split. I had a sappy moment there because it was right by the State Theatre, which is where Matt and I met at a Verve Pipe show. After that there’s a stretch that’s a little more industrial, then a bit on the Kalamazoo River Valley Trail and through a couple parks. 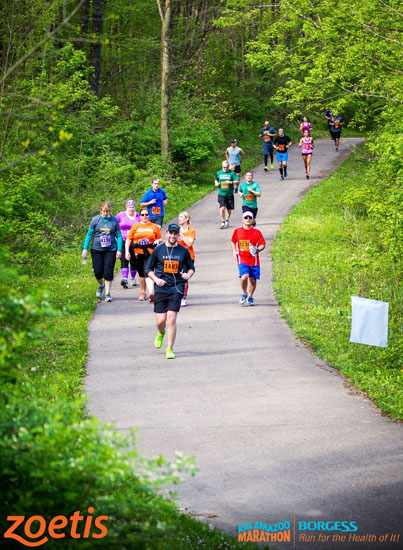 The half course is mostly flat, but has a few good downhill stretches and two tricky climbs uphill. The first comes after the 8-mile mark, and the second is about a mile from the end. I huffed and puffed a little, but kept going strong and recovered pretty well. I smiled when we ran down Random Road because I liked the name, and another fun moment was when a guy ran past his grandma’s house. He was in front of me when he started yelling, “Grandma! Grandma!” He ran up onto the sidewalk and stopped to hug her while she sat in a chair in the front yard, then told her he’d see her in half an hour or so. It was very sweet.

I did not plan on racing this and was pretty disciplined. My legs didn’t feel super fresh as I started, so 8:30-8:40 pace felt just right. I did hope to cut down as I went, and began doing so by miles eight and nine, when I dropped to the 8:20s. I think the surge kicked in when I got stuck behind a few people and couldn’t get around them. When I finally did, I kept rolling and my pace kept dropping. I didn’t really pay attention to my watch and just went with how I felt. I felt good and it made me feel stronger as I started to cruise past some people in the later miles. Running a cut down/negative split half marathon is always a great feeling for me. I love finishing strong. I managed to drop to my typical half marathon pace for the last full mile, and was happy when I saw Matt cheering for me along the final stretch. Though I didn’t have a real goal time, I was happy to slip in just under 1:50. 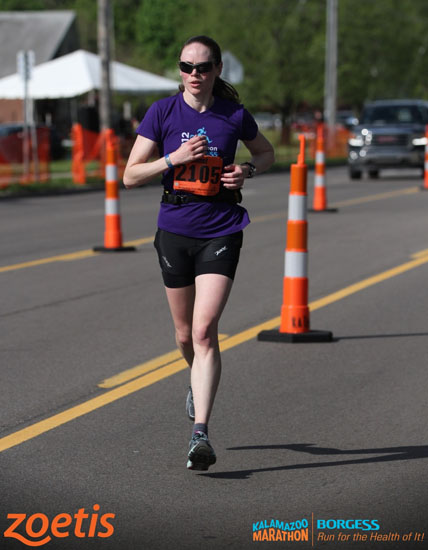 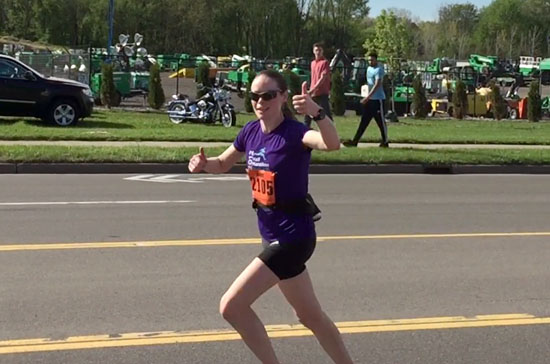 A shot Matt got as I approached the finish 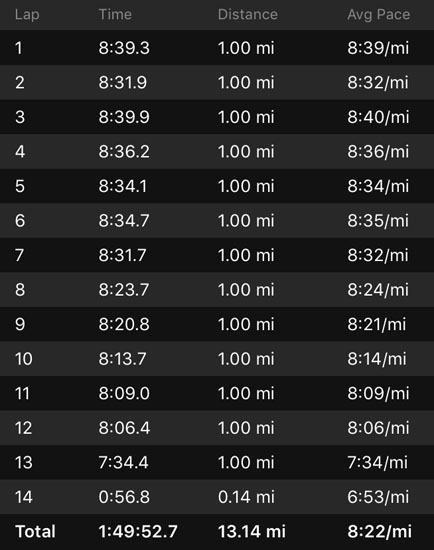 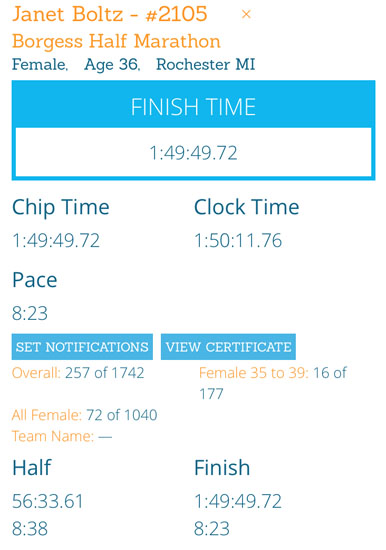 After catching my breath, I grabbed a bottle of water and some chocolate milk. They had bananas and orange slices, but that was it in the way of food. That’s a pet peeve of mine. I always want food at the end of a race! I know Bayshore has goodies like ice cream, cookies, and lots more, so I’ll look forward to that in a few weeks. I was bummed by the lack of food at this race though. You could go to a food tent and buy a BBQ lunch, and even the beer garden required payment – no free beer ticket offered on the bib like so many other races. Oh well. I was thankful that Kellogg was giving out granola bars and a sizable sample of Special K with red berries. Matt and I hung around for about an hour, then headed out and grabbed lunch on the way home. 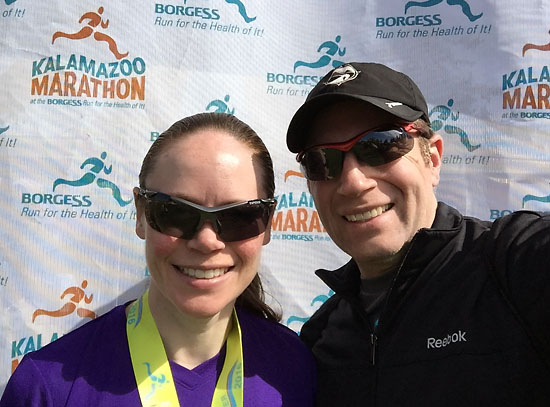 A post-race photo with Matt 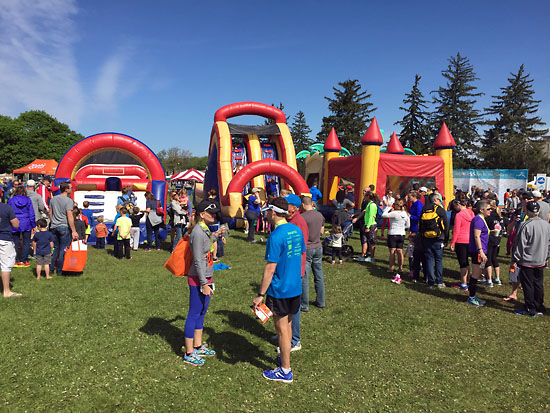 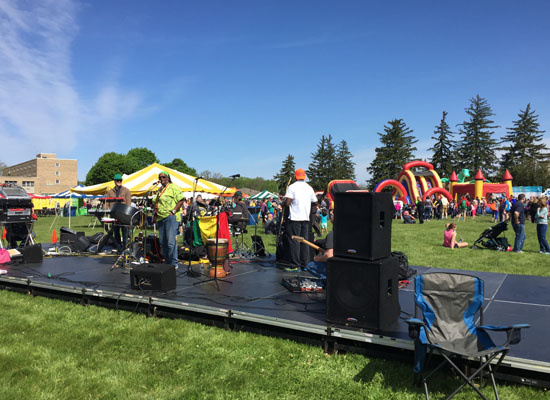 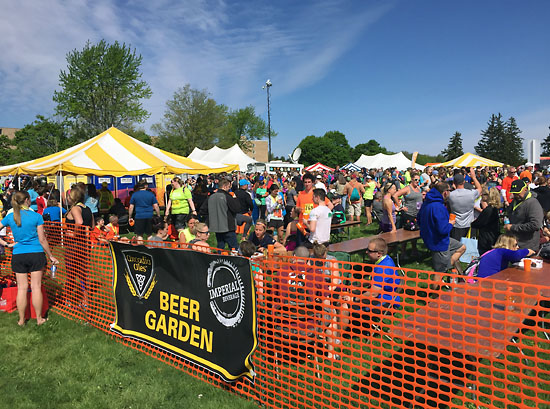 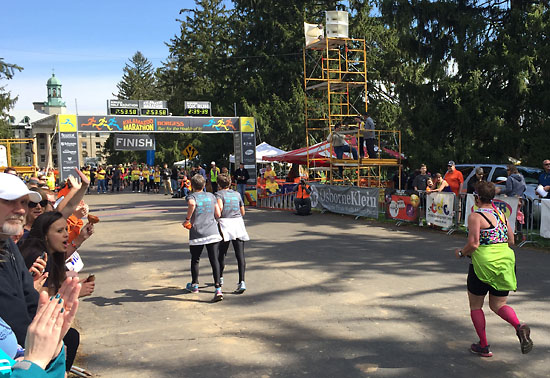 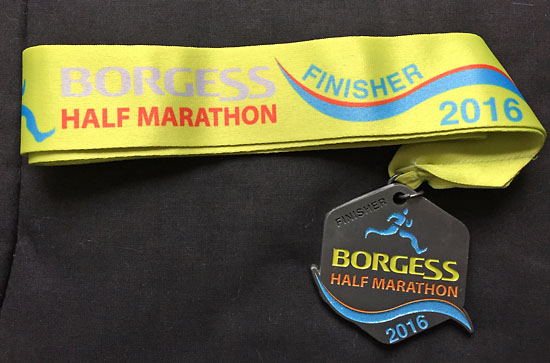 Aside from the lack of food at the end, I loved everything else about the race. The weather has been perfect each of the three times we’ve run the race and it’s an all-around great experience. It was a good way to get my last 16-mile training run in, and gave me practice with fueling in a race environment. Now, I just have to double the race distance in a few weeks…

2 thoughts on “Borgess Run for the Health of It! Recap”