I’ve been trying to avoid racing during marathon training in order to follow my training schedule as closely as possible. I made an exception last weekend when I ran the Borgess Half Marathon because it helped me get 13 of my 16 miles in for the day. I also made an exception for the Prove It 5K on Sunday, May 15. I had 10 miles on my schedule and a 5K really wasn’t ideal, but it was a unique race that I didn’t want to turn down.

The Prove It 5K took place at GM’s Proving Grounds in Milford, MI. For the first time, people had the opportunity to run around the high performance test track. The race was hosted by Trivium Racing and GM’s Chevy Running Club, which I am a part of. Proceeds went to the Dearborn Animal Shelter and Michigan’s Special Olympics. I had never been on the test track and thought it sounded like a very cool race. 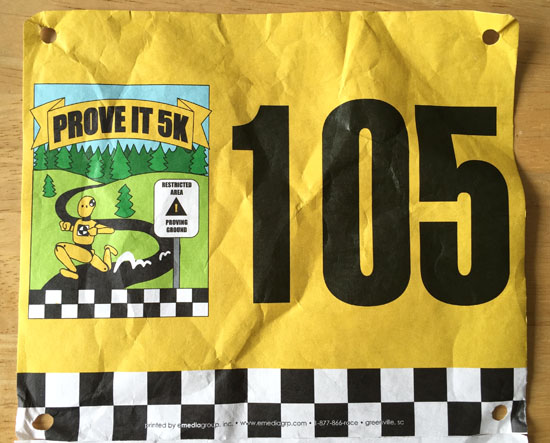 A cool bib for this race

Milford is nearly an hour away from us, so we left the house around 6am in order to get there an hour before the race. We had been warned that the packet pickup and starting area were half a mile from the parking lot, so we needed to allow extra time to get back and forth. There were a couple locations offering an early pickup on Friday evening, but we waited until the morning of the race because neither location was convenient for us.

We were not thrilled to find a layer of snow on the car when it was time to leave home. It’s mid-May!! I had a terrible tempo run on Thursday when I crashed and burned because it was nearly 80 degrees and I couldn’t handle the heat. Now a few days later it was in the 30s and felt even colder with the wind. It was freezing when we got out of the car to head to the pickup area. We got our bibs and shirts then headed back to the car to stay warm.

Fun design, but I probably won’t be wearing it without another shirt underneath!

Once I got my bib attached and was ready to go, I still had time for a warm up run. With 10 miles on the schedule, I was determined to do as much as I could. Matt and I ran back to the starting area and I ran around enough to get a mile in before the race. Some of the track is banked a decent amount which made it a little awkward for running. 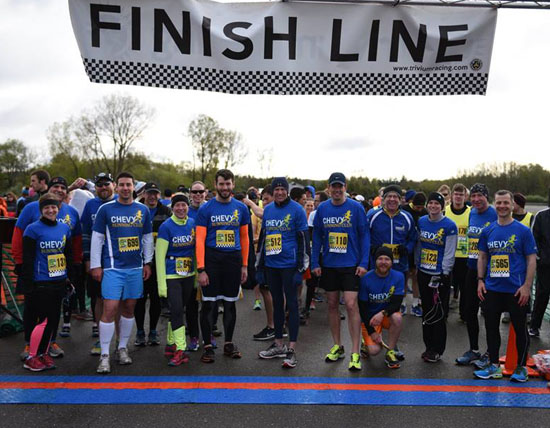 Some of the Chevy Running Club

The Chevy Running Club took a quick group photo, then there was a pre-race talk about the course before the start. They said people were going to be split into waves of 250 people and it looks like just under 600 people ran the race. Matt and I were in the first wave. I didn’t have a plan for the race since I haven’t done any runs at 5K pace for seven weeks. My top priority right now is my marathon in a couple weeks and I didn’t want to get hurt by pushing too hard. Plus, did I mention enough yet that it was it was so darn cold?

The test track had some hills that I hadn’t anticipated. I ran 7:29 for the first mile, not feeling like that was especially easy. I must have warmed up and gotten a boost from some downhill stretches because I picked it up to 7:03 for the second mile. More uphill sections and fatigue made the last mile more miserable. That’s when I told myself that I prefer marathon pace over 5K pace!

The hills weren’t too extreme, but this wasn’t a flat race track!

Our route around the test track

I slowed down to 7:16 for the last mile but finished as strong as I could, aided by a downhill stretch. I was happy with my finishing time of 22:43, which is a little over a minute off of my PR. My time was good enough for first place in my age group! That meant sticking around for the awards ceremony, which was scheduled for about an hour later.

Post-race treats included bottles of water, cans of pop, a variety of packaged nuts, bananas, and a couple kinds of granola bars. We also received a cool glass after we crossed the finish line.

Within 10 minutes of finishing I started a cool down run. I was still determined to get six more miles in that day. I ran back to the car, dropped some stuff off, then did some laps around the parking lot. Eventually I headed back to the track for the awards. I kept moving as long as I could to rack up the miles and to stay warm. I had time for about 4.5 miles.

They awarded the top 20 people based on age grading, using age and gender to put people on a level playing field. In addition, they gave awards to the top person in each age group.

Posing with my award, from Trivium Racing’s Facebook page 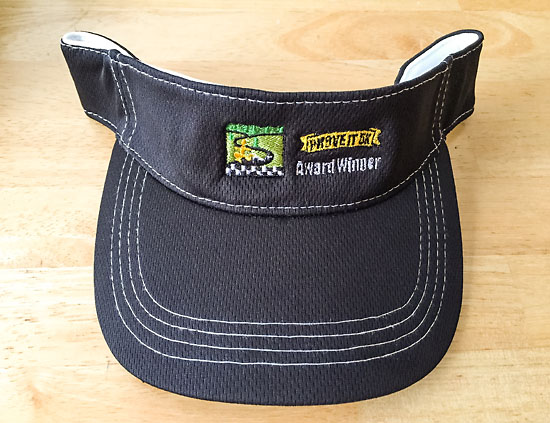 A visor for winning my age group

We headed out after that and I ran a couple more slow miles once we got home. It may have been done in several chunks, but I managed to get all of my marathon training miles in for the day.

Though better weather would have made the day more enjoyable, it was very cool getting a chance to run around GM’s test track. Many thanks to the Chevy Running Club and Trivium Racing for making it possible!