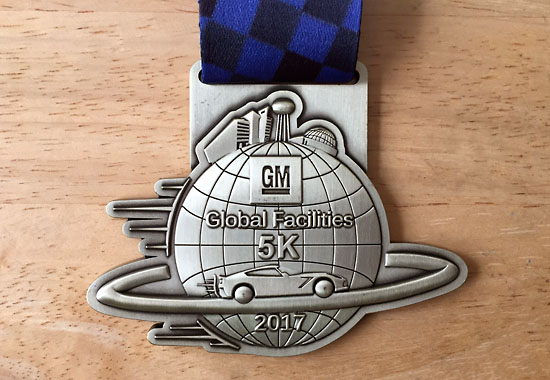 On Saturday, November 4th, Trivium Racing and GM partnered up to present a 5K at GM’s Global Technical Center in Warren, Michigan. Since I work there, I jumped at the opportunity to participate. I wanted to be supportive of the Chevy Running Club and the charities that would benefit from the race – the Special Olympics and Friends for Animals of Metro Detroit. I signed up right away and even got Matt’s permission to sign him up…though he was very reluctant. He practically lives at work lately, has barely been running, and hasn’t had any desire to race. I was excited that we’d finally do a race together since it had been nearly a year since we’d done so.

The race started at 9:00 and we got there a little after 8:00. We got our shirts and bibs then went back to the car to stay warm. It was around 40 degrees with a light breeze, and I’m not used to the cooler weather yet.

The shirt and medal feature a water tower, the Design Dome, and other architecture from the campus. The famous architect Eero Saarinen designed the Tech Center campus, which is a square mile. We only got to see a little portion of it during the race since we did a 1.5-mile loop twice. I’m sure it’s hard to shut down too many roads when some people still need to get to work, plus this loop was logistically ideal. 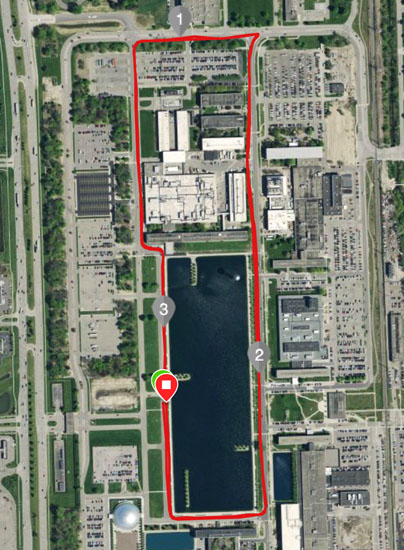 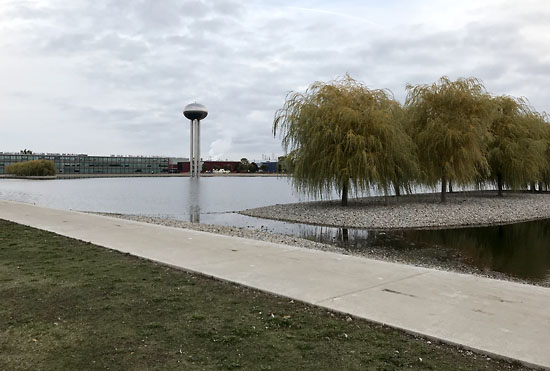 Eventually we ventured back out into the cold. I was surprised that I only came across a handful of people who I knew from work. I knew that Marty, who recently retired, and his wife, Cheryl, would be there. We got to chat a little bit before the race. Rather than do the organized stretches and warm up with LifeSteps, I opted to do a warm up jog.

I started my jog along the lake and my eyes started to water instantly. I didn’t think 40 degrees should seem that cold! I think it’s a great temperature for a longer race like a half marathon, when I’m running a slower pace. Trying to run fast when it’s cold is tough though, which is why I made sure to get the blood flowing beforehand. Right before the start, I joined some members of the Chevy Running Club for a group photo.

Once the race started, I noticed right away that my breathing felt labored in the cold air. It has been pretty warm until recently and apparently I’m not acclimated yet. Despite doing a warm up jog, my feet felt semi-numb for the first half of the race. I was surprised that I was so wimpy about the cold!

One great thing about the race route was that it was totally flat. They had music playing at one spot, a very enthusiastic woman giving high-fives and cheering in another spot, and a woman in a Cookie Monster onesie who made me smile.

As I finished my first loop, the announcer said that the second, third, and fourth place women were close to each other and that it would be quite a finish. I realized that meant I was in fourth place. The woman in front of me wasn’t slowing down, so I didn’t think there was a chance I’d catch her. However, the woman in front of her did slow down during the second loop. I normally think about running my own race and don’t worry about trying to beat other people, but knowing that I could get a prize for being one of the top three women helped motivate me to keep pushing. Eventually I caught one of the women and I knew I better finish strong because I didn’t know how close she might be behind me. Trying to run 5K pace is always a challenge, but dealing with labored breathing in the cold made it even harder. My legs felt fine but my lungs did not.

My official finishing time was 22:12.9. They tracked both chip and gun start times, and for some reason mine was the same. I didn’t start at the front though, and it definitely took me a few seconds before I crossed the line. My chip time probably should have been more like my Garmin’s time, so I’m not sure what happened there. It’s only a few seconds so I don’t really care, but if that had cost me my third place finish I may have cared. Especially since the official times show that the next woman was only one second behind!

(Edit – A couple days after I wrote this I realized they used gun times for the overall winners and chip times for everyone else. They made an announcement about that prior to the race, but it didn’t really register with me because I didn’t think I’d be fast enough to worry about it!)

Matt with both feet off the ground, flying into the finish 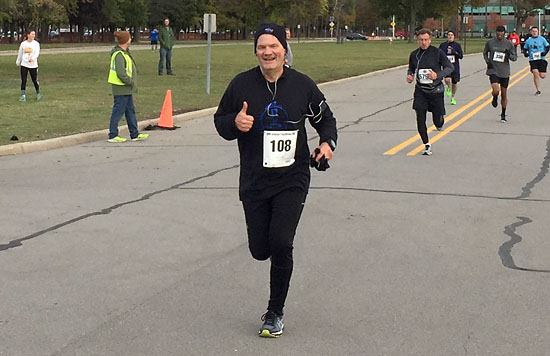 I grabbed a granola bar and some pretzels then went back to the car with Matt so we could crank the heat. We put some extra layers on and sat there for a bit until it was time for the awards ceremony. I got a pretty cool prize for placing as the third woman.

Matt and Cheryl both won age group awards. They received a cool cup.

We caught up with Marty and Cheryl and took some photos together before it got too cold for us.

Overall, it was a great race. A little over 300 people participated, which is pretty good for the first year. I’m looking forward to seeing what they do for the race in the future. They already mentioned doing it when it’s a little warmer next time, which sounds good to me. Although the combination of the cold and the struggle of running as hard as I could for three miles wasn’t especially fun at the time, I was pretty happy about the race later…when I was nice and warm. It always depends on who shows up, but I was pretty excited to be one of the top three women. I was also happy that Matt and I got to enjoy a race experience together. I hope it won’t be another year now before we race together again!