On Sunday, November 12th I ran the Big Bird Run 10K in Roseville, MI. The race has been around for 39 years and I’ve considered running it several times but never got around to it. My friend Carmen has run the race many times and talking to her reaffirmed that I should sign up this year. Perks she listed included a flat course, a good shot at age group awards, and great raffle prizes.

The 10K was scheduled to start at 10:20, so the late start was another bonus. I didn’t have to wake up super early! I still got there a bit early because people running the 1-mile race started at 10:00, with the 4K following at 10:15. A volunteer motioned for me to park in a lot a short walk from the rec center where the race was based. When I got my packet I saw that there was plenty of parking right by the front door, so I moved my car closer. That was a wise choice because it made it easy to grab a hat at the last minute when it started to rain, plus I could get my coat to stay warm right after I finished.

The rec center had real restrooms and a warm gym where we could hang out beforehand. I found Carmen and her mom, and Carmen reminded me to submit the raffle ticket on my bib so I’d have a chance to win one of the many turkeys!

It was just under 40 degrees, and with a little bit of light rain, I opted to wear a jacket. I was a little warm during the race and probably could have gone without it, but I didn’t know if the rain would pick up. Luckily the rain was very minimal and didn’t last the whole time.

I lined up after watching the 4K racers (including Carmen’s mom) start. Carmen had warned me that it was easy to start too fast at this race, and sure enough, I did. I held steady for the first couple miles and it felt like an easy pace, but eventually I fizzled out and it was a harder effort the rest of the race. We started on a couple of busier roads, then the rest of the run was on residential roads and through a couple of parks. The course was totally flat other than the twisty climb up and over a pedestrian bridge twice. It definitely felt harder the second time, but the way down gave me a nice burst of speed. I also found a little bit of extra speed at the end when we had a straightaway of nearly a quarter mile. My official time was 46:56. It’s not one of my fastest 10K times, but I was happy enough with how it went. 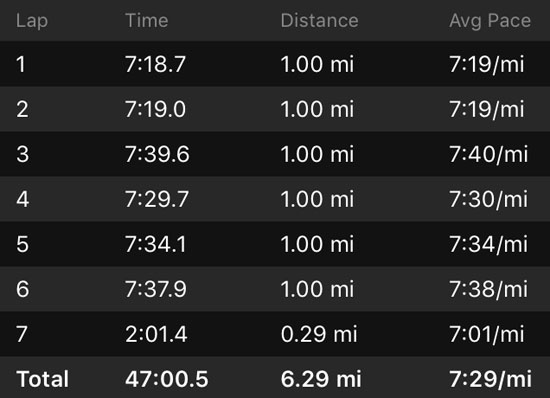 Carmen came through shortly after me with a big PR! You can read about her race on her blog. 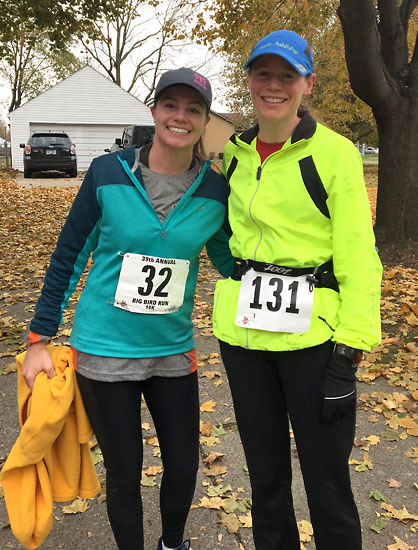 They had bagels and fruit in the gym, where they were giving out the awards for the earlier races. We checked the raffle board to see if our bib numbers were listed under various prizes. Carmen’s mom won a turkey! We realized we should find the results to see if we had placed in our age groups. I had won mine and Carmen was second in hers.

I won a Michelob Ultra prize with a high-quality drawstring bag that had a windbreaker inside, plus a medal. Carmen won a nice plaque.

It took a while to get through all of the awards, but Carmen told me that it was worth sticking around through the very end. At that point they drew numbers until they gave away all of the unclaimed raffle prizes. We were especially interested in the one remaining turkey. After drawing numbers of a bunch of people who had left, Carmen’s number was called! She and her mom BOTH won turkeys! What a nice Thanskgiving for them.

Knowing that the race has been around for 39 years, I had thought it would draw a bigger crowd. It looks like 39 people did the mile, 105 did the 4K, and 169 did the 10K. It wasn’t a huge crowd, so it made for a nice, small hometown race. Hansons Running Shop supports the race, and their runner Mel Brender (who sold me some shoes a week earlier!) won the women’s 10K. They also provided the runners with a pair of gloves in the race packets.

It was cool to see a bunch of local running friends and run a nice, flat race with fun prizes. I just may have to return next year for the 40th year of the race!

Romeo was attracted to my prize instantly