Another four weeks has gone by and my training continues for Toledo’s Glass City Marathon. Coping with the snow has me rethinking how smart it is to train for an early spring marathon! While the extreme cold temperatures were more of a problem the previous weeks of training, snow has been the latest issue. It requires so much extra effort to run even if there’s just a coating of snow. I run on the treadmill most of the week, so by the weekend I’m dying to get outside. When I get outside, it’s a difficult slog through the snow that makes me want to get back to the treadmill. Still, I’ve managed to train through it one way or another. Here’s how the last four weeks have gone:

I spent a lot of time on the treadmill during the week, but I did get outside for an easy run on Wednesday. I followed up with 10 miles on the bike in the basement, but I don’t think that was the best idea. I’ve been taking Mondays or Wednesdays off of running as I’ve eased into six days of running, and this was the first week I hit six days. From this point on, I’ll probably neglect the bike until the marathon is done. I’ll maintain my swimming routine, but juggling the bike with six days of running is a bit much.

Saturday’s 7-mile run at Stony Creek Metropark was wonderful. It was 39 degrees and sunny! It’s amazing how much your mood can change when the sun is shining and the birds are singing. 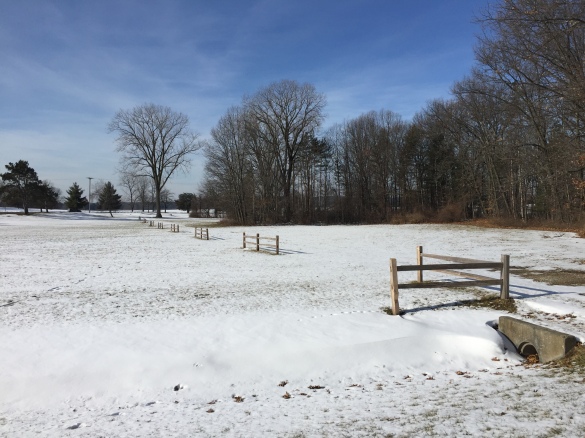 Sunday is when I had 14 miles on my schedule and I ran 11 miles prior to Chill at the Mills 5K – recap here.

Chill at the Mills 5K in Rochester, MI

Totals for week #5: 36 miles of running, 10 miles of biking, 3.5 miles of swimming, and two weights/strength sessions (45 minutes for one, 20 minutes for the other)

I dropped back down to five days of running this week because I was busy one night, and it probably helped keep my legs fresh for my first big speed workout from the Hansons training plan. Their beginning marathon plan starts speed work the sixth week and I’ve chosen to incorporate their Tuesday workouts into my Higdon marathon plan. The first workout was 12x400m on the treadmill. I started the first three 400s at 10K pace and felt good, so I kept increasing my pace for each set of three until I finished the last set at 5K pace.

It was warm enough for shorts for my Saturday run! The weather has been all over the place this winter. I ran the 8-mile loop at Indian Springs Metropark, aiming to do seven of the miles at marathon pace. I was too fast by at least 10 seconds per mile. It might seem minor, but I really need to work on slowing down. If I run like that during the marathon, it’s bound to backfire in the late miles. 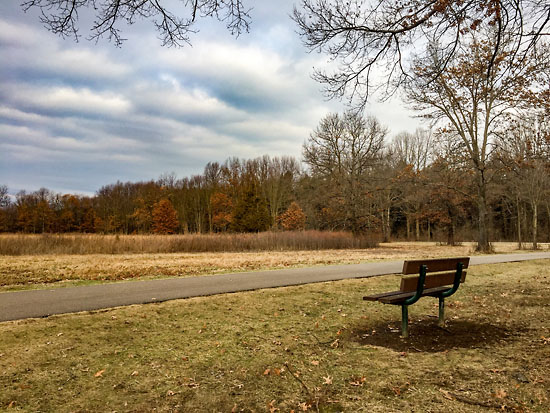 I had a cut-back week for my long run, so I was down to 10 miles on Sunday. It was in the 30s and most of the snow and ice had melted, so I decided to run from home while I could. I knew the snow would be back the next day and I wouldn’t be able to run around town again for a bit. It was a gorgeous day in Rochester. 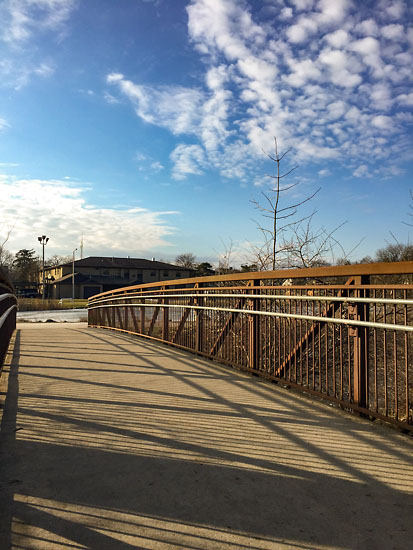 Totals for week #6: 34 miles of running, 3 miles of swimming, and two weights/strength sessions around 45 minutes each

Back to six days of running this week. It’s been a year since I’ve run 40+ miles in a week and it went well. I nailed another Tuesday workout on the treadmill – 8x600m repeats. Again, I started around 10K pace and kept speeding up to hit 5K pace for the last couple 600s. I also opted for the treadmill on Saturday when I had eight miles to run at marathon pace. The cold was back (real-feel in the single digits) and I did NOT feel like dealing with it. I feel comfortable at marathon pace when I can dial it in on the treadmill and just roll. I know I have to get a feel for running it naturally outside though.

By Sunday I was anxious to get outside for my 16-mile long run. It was a tough one, to say the least. We got snow the night before and it continued through my run. The path at Stony Creek Metropark was not cleared when I got there. I wore my trail shoes hoping it would give me more traction, but any gaps between the lugs on the bottoms of my shoes filled in with snow right away. 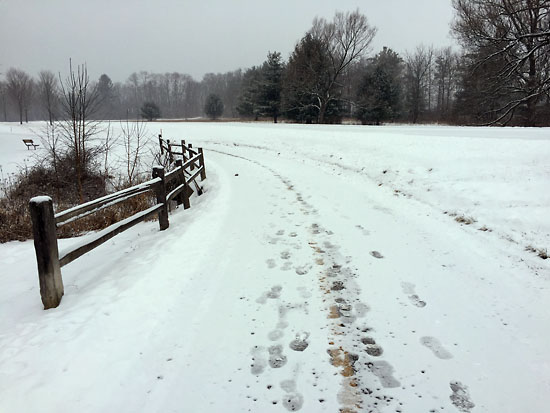 One cool thing about this run was that the Hansons-Brooks team was out training. Watching the pros fly by as if the snow wasn’t a factor inspired me. However, it seemed like the longer I ran, the more I struggled with traction. Even though there was just a coating to an inch of snow, running in those conditions was slow and draining. I felt pretty miserable at the end. It did not help ONE BIT that as soon as I finished and walked to my car, a truck finally came along to plow the path. Great timing. My legs were a little sore following this one and I developed a knot in my left calf that stuck around for most of the week.

Totals for week #7: 43 miles of running, 3 miles of swimming, and two weights/strength sessions around 45 minutes each

Despite time with the foam roller and the stick, I couldn’t seem to work that knot out of my calf and it was pretty tender to the touch. I felt it for the first few steps of my runs this week, but luckily it faded as I kept going. I thought I might need to get a massage, but by Friday it finally loosened up on its own. I had 6x800m for my Tuesday workout and it went well. After spending all week on the treadmill, I was ready to get outside on Saturday.

We got a ton of snow on Friday and it continued on Saturday. I went to Oakland University because I know they plow the sidewalks. Some spots around the core parts of campus were totally clear, but other spots had enough of a coating to make me struggle again.

Eight miles felt like a lot of work, and stopping for pictures of the scenery was the one saving grace. Working my legs extra hard as I trudged through the snow left me a bit sore, so I didn’t think I could do it for 17 more miles on Sunday.

Initially I thought I’d head to Stony and hope that the path was clear enough. I changed my mind when I saw the weather forecast, which called for more snow and even freezing rain. There was no way I would attempt 17 miles through that. It didn’t seem like 17 miles on the treadmill was a good option either, but I decided to try. I downloaded a bunch of episodes of Jerry Seinfeld’s Comedians in Cars Getting Coffee on Netflix and set my phone up on the treadmill to watch. Episodes are only 15-20 minutes long and he has a bunch of fun guests. It was a great distraction and I could just listen when it bothered my eyes to look down at the small screen for too long. I ended up on a treadmill that shut down every hour, so I had a brief break a couple times when I had to restart the treadmill. I broke it up into segments of 6.25 miles, 6.25 miles, and 4.5 miles. Mentally, that was easier than looking at it as 17 straight miles. Somehow I pulled it off! I went through a 25 oz. bottle of water, a 21 oz. bottle of GU Brew, and ate three Clif Shot Bloks every five miles. When I had to scrape a thick layer of ice off my car afterward, I knew the treadmill had been the right choice for me. Nonetheless, I’d prefer not having to do that again!

Totals for week #8:  44 miles of running, 3 miles of swimming, and two weights/strength sessions (45 minutes for one, 30 minutes for the other)

Up next – a half marathon next weekend. I’m almost halfway through my 18-week plan and Hal Higdon’s schedule calls for a half marathon race. It’s not necessary to race, but I like the idea of seeing where I stand and what I’m capable of at this point. I found a race in Columbus, Ohio that sounds pretty interesting. I plan on going to explore a place I’ve never been and I’ll make a fun weekend out of it.