A race that features a running pancake cartoon and all-you-can-eat pancakes at the end? Count me in!

The Flapjack 5K and Mile Fun Run took place on Sunday, June 2nd in Macomb, MI. I had actually planned to do a swim/run race in Ohio that day. When a pre-race email mentioned an E. coli advisory for the creek where I’d be swimming, I decided to bail on that race. Apparently some people still swam, but if it’s bad enough to issue an advisory, it’s bad enough to keep me away. At first I was bummed, but I knew my friend Carmen (visit her blog here) had planned to do a pancake run on Sunday. Since my schedule was open and it sounded like fun, I decided I’d join her.

The race has been around for 15 years and benefits the Kids Coalition Against Hunger. I signed up on Friday evening prior to the Sunday morning race and was still able to get a cotton t-shirt.

I got there an hour before the 9:30 start and found Carmen in the elementary school’s gym where we picked up our packets.

It was a sunny morning in the high 50s, and although it felt a little cool while standing around, I was sweating by the end of my mile warm up jog. This race attracted lots of younger kids and their families, and the morning started with a mile fun run about 20 minutes before the 5K. When it was time for our race to begin, I didn’t push very close to the starting line because it was clear that the kids were ready to blast off. I knew it was better to have them in front of me so they wouldn’t trip over me!

Thanks to Greg Sadler for the great race photos.

I’ve done enough races to know that the younger kids might make it a quarter mile before it becomes hard to maintain the all-out sprinting speed. A few of them made it a little bit longer, and a few kids who were older ran solid races. The crowd thinned out pretty quickly as we worked our way through the flat neighborhood roads.

This 5K was more intimidating to me than the half marathon I ran a week earlier. I feel more comfortable doing longer, slower endurance runs. Whenever I “race” a 5K I know it’s going to hurt. I push my pace to the threshold and just hope I can hang on. I had run some 400 repeats at my goal 5K pace a couple times in the weeks leading up to this race, and that had been the extent of my recent speedwork. I had no idea what I was capable of.

I ran by feel and my first mile was just under seven minutes. It was hard work and I didn’t know if I’d be able to keep it up. I kept hoping I wouldn’t crash hard. I could only see two women ahead of me but didn’t know if there were more out of sight. I caught up to one of them within the second mile and wondered if I could be the second woman. The other woman kept getting faster and there was no way I’d catch her. As the crowd spaced out, I wished there were more people around to motivate me not to slow down. Somehow I kept running strong through the end, but it sure was tough.

I managed to smile just in time for my finishing photo. If you look closely, you can see something stuck on the bottom of my right shoe. Somehow I picked up an arrow sticker from the road when I rounded a corner. It was pretty annoying to have that flopping around for at least a mile of the race, but I wasn’t going to stop to peel it off!

I was pretty shocked and happy when I saw that I had officially finished in 22:16, especially since my distance was a little long. It was hard to hit tangents with all of the twists and turns through the neighborhood.

I was surprised that my pace was so consistent…and that I maintained it somehow. When I do speedwork I typically consider 7:00 pace my 5K pace. I didn’t think I was in 5K shape so this was a really pleasant surprise. I was also happy when I saw that I was the second female and had won my age group. That’s one thing I love about smaller races – I stand a better chance at placing well! 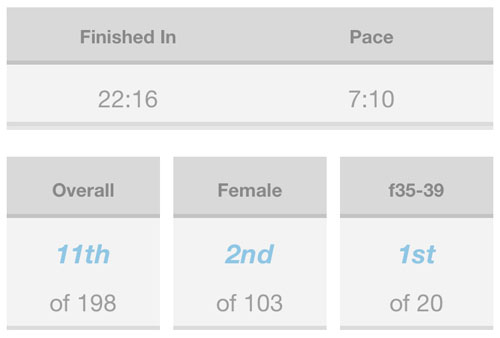 I cheered for Carmen as she finished soon after me. Then it was time for pancakes!

After the nice breakfast we went to collect our age group awards. There was a group standing around in front of the pancake poster where I wanted to pose. When I asked if I could get in there for a picture, one of the guys cracked me up as he posed with me.

I thought it was fun that we received little bottles of maple syrup for age group awards. The clay pancake medals were pretty great too.

Overall, it was a fun morning. I was pretty close to my ideal 5K speed and wasn’t expecting that at all. If I can already manage that kind of speed when I’ve barely put in the work, it gives me hope that I could have a promising summer of racing once I DO start working on it.