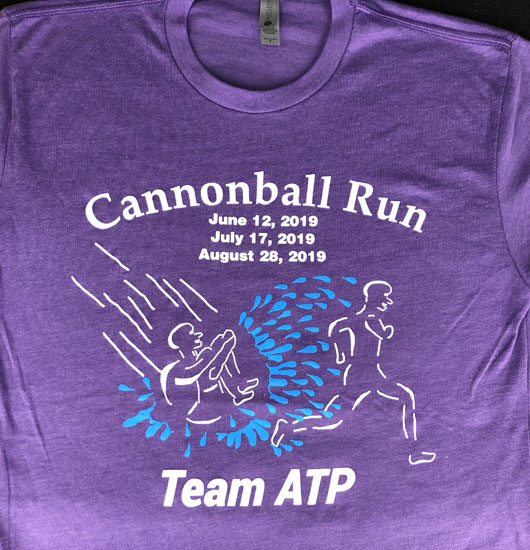 Back in November when everyone had Black Friday sales, I browsed through some triathlon websites to see if I could find any races I was ready to commit to that early. I was intrigued by a 3 Disciplines series called the Cannonball Run. It’s an aquathlon (or swim/run) that takes place in Saginaw, MI one Wednesday night in June, July, and August. Although I get enough biking in to manage my way through triathlons, I truly enjoy swimming and running. Cutting out the bike leg sounded like my kind of race!

I’ve done an indoor “aquadash” race using a pool and treadmill but have never done a swim/run outside. Saginaw is an hour and a half away which is pretty far to go on a weeknight. I knew that I’d get out of work early enough to make it on time though. The Black Friday sale allowed me to sign up for all three events plus a t-shirt for $45. I figured that was a good enough deal to go for it. If something came up and I missed one or two of them, it would still be a reasonable deal.

When Wednesday, June 12th rolled around, it was time for my first multisport event of the season. I had plenty of time to make the drive after work with a 6:30 start, even with a frustrating stretch of construction to battle along the way. I changed into my tri suit and ate an energy bar at a rest stop when I got closer to Saginaw and made it to the park with 45 minutes to prepare.

The race took place at William H. Haithco Recreation Area. Registration was by a pavilion in the park where I collected my bib, swim cap, timing chip, t-shirt, and some samples in a drawstring bag. Although 3 Disciplines is the event management company for the race series, the event is actually owned by Team ATP, a triathlon club. A good chunk of the people there were members of the club.

The transition area was a big patch of grass with flags around it and people could leave their stuff wherever they chose. My nerves kicked in when I started to set my stuff up. Towels, swim cap, goggles, wetsuit, shoes, socks, hat, number belt, and hydration belt…I think I had everything. I have checklists to make sure I don’t forget anything but I’m always a bit anxious when I do my first multisport event of the season. It had been a while since I had dealt with my wetsuit. I used plenty of Body Glide on my lower legs in hopes that it would help me get it off more easily after the swim. I also remembered to put some on my neck to avoid chafing from the wetsuit. It took two races for me to learn that hard lesson last summer.

I had signed up for the long course race –  a 1500m two-loop swim and a 3-mile run. People could also do the sprint distance, which offered a 500m swim and 1.5mi run. The swim took place in a man-made spring-fed lake. I was relieved to see that the water was 72°. That meant it wouldn’t feel too cold, especially in my full wetsuit.

I believe 16 of us chose to race the longer distance and our race started first. We lined up on the dock based on how fast we thought we would swim. First they asked for people who could swim 500m in 8-10 minutes, and I went near the back of that group. The race began at 6:30 when the first person jumped into the water. We may have been spaced out by five seconds or so. I haven’t practiced diving since I was a kid and I’m not allowed to dive into the pools where I swim. Without any practice, I didn’t think it would be wise to dive and possibly lose my goggles so I just jumped in. A little wind created some tiny waves. They weren’t very significant, but it was still a little more rocky than the pools that I’m used to. Thanks to the time trial start it didn’t get congested in the water. Someone cut in front of me at one point which was annoying but I never bumped into anyone.

In the open water I don’t really have a good feel for my rhythm or pacing. Things feel very routine for me in the pool and I’m a little thrown off in the open water. I hadn’t practiced in the open water at all this season, but I feel comfortable enough that I don’t worry too much. I was fine with spotting the buoys and aiming for them. It just felt a little weird to have my shoulders and arms constricted by the wetsuit and not know what kind of pace I might be swimming.

When I got back to the dock area after my first loop, I started to run into some of the sprint swimmers as I started my second loop. Not literally, but I had to make a point of going around a few people. I had to do that at the end as well when I was trying to push my pace as I approached the finish. 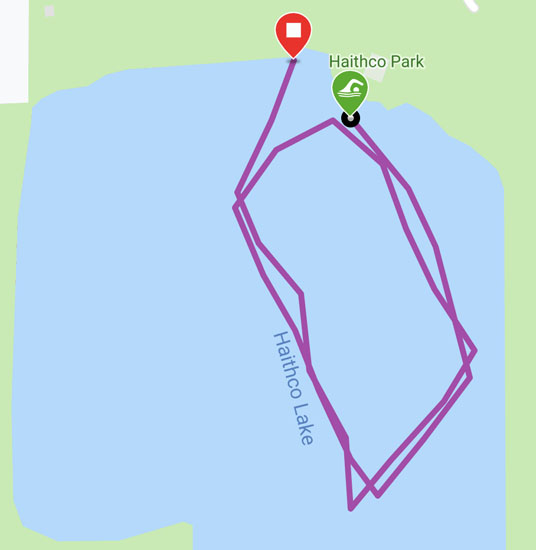 I ended up swimming 1500m in 28:02. I predicted I’d be somewhere around 28:30 so I was happy with that time. I was wobbly when I got out of the water and couldn’t run to transition. I was so hung up on getting my wetsuit sleeve over my watch that I didn’t take my swim cap or goggles off until I was in transition. I realized I had forgotten to take my hair out of a bun when I went to put my hat on. Little things like that made me aware of my rustiness, and I just hope I remember those things so I have smoother transitions as I race more this summer. All of the Body Glide made my suit nice and slippery so I could take it off, but I still had to sit down to get my ankles and feet out. I sat down to get my socks and shoes on as well because I still didn’t have good balance. I got through the transition in 1:40.

I was pretty winded as I started the run. I’m used to being winded as I start the bike leg of a triathlon, but it felt a little harder for me to manage while running. I knew I wasn’t going to be capable of running my true 5K kind of pace and just did whatever I could.

The run took us onto the road for a couple of out-and-back stretches, then we stayed in the park for the rest of it. The road had some stones, then there was a dirt path around the lake, and we ran on some pavement as well. The whole route was nice and flat. The out-and-back nature of the course allowed us to see other runners which is always a good distraction for me. When I got out to the far part along the lake, I kept wondering when the turnaround would come. A woman ran past me in the opposite direction and told me I should be able to catch her. I questioned that at first until I started to approach her a few minutes later and realized she was within reach. I’m typically more competitive with myself rather than aiming to beat other people. However, trying to catch up with her provided good motivation to keep myself running hard. Eventually I passed her and I felt strong by the end of the run. My watch came up with a little less than three miles. Either way, I was glad that my pace improved as I went and had an official run time of 21:46. My overall time was 51:27.

It look a few minutes to catch my breath, then I got a granola bar, Rice Krispies Treat, fruit snacks, and some chocolate milk. I enjoyed chatting with the woman I had passed during the run. Despite finishing ahead of her, her overall time was actually better. With the nature of the time trial swim start you never really know where you stand overall. She had started behind me in the swim but swam a few minutes faster than me. It was a pretty small group of us who raced the longer distance and it looks like I may have placed right in the middle overall. I didn’t think I had to stick around for the awards ceremony which was good since I still had to drive home. 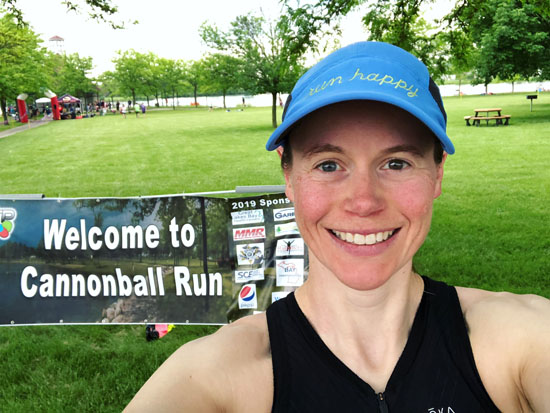 I didn’t have any specific expectations going into this race which left me with a weird feeling after the race. I was glad I had done it but I didn’t have any feelings about either exceeding or not meeting expectations since I didn’t have any. The next morning when I reflected back on the race I felt proud and more accomplished. It was a pretty cool adventure to have on a Wednesday night. The logistics of driving there, making sure I had everything, dealing with transition, etc. could have kept me home in my comfort zone, but I got out and challenged myself to do something different. I’m looking forward to doing it a couple more times this summer and will be curious to see if my time improves now that I have a baseline.