I’ve had a string of solid races recently but sometimes I have one that reminds me that they’re not all going to be great. This was one of those. It’s not that it was bad, it just didn’t quite go how I had hoped.

There are three Cannonball Run races in the series – one in June (recap of that race here), one in July, and one in August. It’s the same course each time so it’s easy to compare the results from race to race. The second one took place on Wednesday, July 17th. Like last time, I left from work and made the long drive up to Saginaw, stopping at a rest stop to change into my tri gear along the way. I had a little more than half an hour to spare before the 6:30 start.

We had a number of hot days and the water was so warm I wouldn’t need my wetsuit for the swim. It was around 81° outside at the start of the race and the water was around the same temperature. I knew I’d lose the advantage of the buoyancy, but maybe I’d pick up some time with a quicker transition since I wouldn’t waste time struggling to get out of the wetsuit. It would be interesting to compare how I did with the wetsuit at the last race versus without this time.

I participated in the longer race again, which involves a 1500m swim followed by a 3-mile run. The longer race started first and people doing a 500m swim and 1.5-mile run would start somewhere around 10-15 minutes after us. It was a warm, sunny day and I was sweating just standing on the dock waiting for the start. I thought about how it might be smarter to keep doing loops in the lake and skip the run since it was bound to be uncomfortably hot!

Like last time we jumped in the lake one by one a few seconds apart. The water felt good and I didn’t have any thoughts about it feeling too warm. I noticed that the outside of my left leg was a little tight. For some reason I seem to notice that IT band when I start the swim during a lot of races. At times it felt like the lower half of my body was sinking and I wished I had the wetsuit to help keep me afloat. Other than that, it seemed like the swim went fairly well. I stayed on track with the buoys and didn’t have many run-ins with other swimmers. I realized that’s because most of the people were faster and had left me on my own! It did seem like the swim dragged on for a long time though. We had two loops and I told myself that maybe the first one would feel long and the second would fly by. It was a little tricky to spot one of the buoys initially as I swam toward the sun, so I slowed down a little bit as I tried to get my bearings. There were a few people to go around as I started the second loop where the people doing the shorter course had just started. Otherwise it was pretty uneventful as I finished the second loop and ran up the beach to the transition.

As I took off for the run, I remembered how winded I had felt when I did the race in June. I seemed to have a better rhythm from the start this time which was reassuring. Between being soaking wet and having a little breeze, I was happy to find that I didn’t get as hot as I thought I would during the run. My pace was in the 7:40s which is where it was during the triathlon I had done a few days earlier and I figured that must be my pace for multi-sport races. I caught some people during the run and also knew a couple of speedy guys would pass me when I saw them flying along during the early out-and-back stretches. I had a strong finish and felt like it had been a pretty good race.

I had received a t-shirt at the first race and knew that was good for all three races. It was a fun surprise to find that we all received a mug at the finish this time around.

It was also fun to find that they had boxes of donuts from Tim Horton’s this time too. They also had granola bars, Rice Krispies Treats, fruit, and fruit snacks.

While I ate my snacks, I checked my Garmin to see how I had done. That’s when I discovered that the race hadn’t gone as well as I had thought. I finished in 59:42 with a swim time of 36:40, a transition time of 0:59, and a run time of 22:03. The run was good – splits of 7:44, 7:41, and 6:38 (which was 7:34 pace since it wasn’t a full mile). I had the exact same run distance as last time – 2.88mi. A little shorter than the supposed three miles, but at least it was the same. That time was 17 seconds slower than last time, but it was also cooler outside last time. My transition time was 41 seconds faster this time without a wetsuit to deal with.

The swim time is what left me baffled. 36:40 this time versus 28:02 last time for 1500m. I’m usually around 31 minutes or so even when I do a casual pace for 1600m in the pool. How could I have been SO much slower? I know I felt like my legs were sinking at times, but aside from that, I didn’t feel horribly off during the swim. I realized maybe I should consider that I had raced hard during an Olympic distance triathlon on Sunday and was attempting to race again on Wednesday. That might be pushing it a little. My run was fine though, so what on earth happened to my swim? I was really bothered by it.

I placed fourth out of nine females last time and didn’t stay for the awards ceremony because they were just for the top three. I figured with a time that was over eight minutes slower I wouldn’t win one this time either. However, a couple of the fast women from last time didn’t race this time and I was the second female out of five. I was kind of hoping to hit the road since it was a weeknight and I had nearly an hour and a half to drive home, but I couldn’t complain too much about sticking around to get an award! 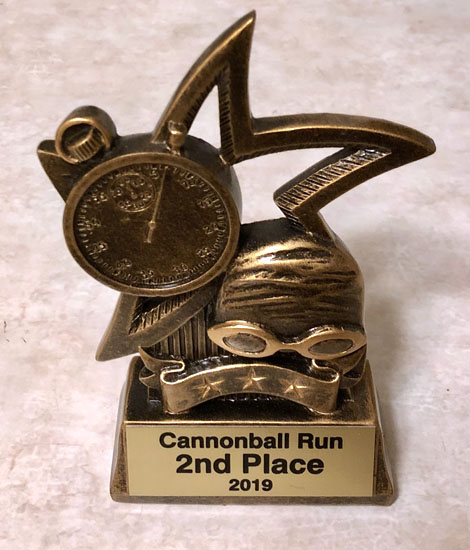 The next day I felt the need to look through all the statistics and see if I could figure out what had happened. I realized the swim had probably been long. Although I know I can’t rely on the accuracy of my watch for an open water swim, I had a distance of 1410m in June versus 1627m this time. That helped explain some of it. Plus, I noticed that a bunch of the people who had raced both times had swim times that were 3-5 minutes slower this time. Eight minutes slower for me was still really extreme, but it was what it was.

Even though I was frustrated that my swim time was so out of the norm, I knew I didn’t need to beat myself up. I got a good swim/run brick workout in regardless of my time. Racing a couple times within a few days probably isn’t ideal and I should accept that doing so might be pushing my luck. I’ve had plenty of running races where I’ve gone slower than I hoped. This time it hit me during the swim. It was still pretty cool to get out there for an adventure on a work night and I enjoyed myself. That’s what should matter most. When the final race of the series rolls around in late August, I’m hoping to end on a stronger note.

One thought on “Cannonball Run Recap – Round 2 of 3”