When I started the Cannonball Run series in June, I wondered if it would really be necessary to write a separate recap for each of the three races. After all, it would essentially be the same race each time. Well, they all played out a bit differently and the series ended on a pretty great note, so here comes the third recap!

June 12th was the first race of the Wednesday night series (recapped here), July 17th was the second (recapped here), and August 28th was the finale. At the beginning of the week I questioned if I would even bother with the final race. I had signed up for the full series on Black Friday when there was a sale for $45 and I figured I had easily gotten my money’s worth already. I had just raced Crim on Saturday and have been putting too many miles on my car lately. Did I really want to make the trek to Sagniaw on a weeknight again? It can take as long as an hour and 45 minutes with traffic after work. On Tuesday night I decided I would pack everything for the race and see how I felt on Wednesday. I decided to go for it. I’d be doing some kind of workout anyway and it might be my last chance to swim in a lake this season.

I had to hustle after work because this race started at 6:00 – half an hour earlier than the other two races in the series. At least I had the routine down and tried not to stress too much when I got there with half an hour to spare. When I was about to put my wetsuit on and noticed marker on someone else’s leg, I realized I had skipped the body marking stop and had to run over to get that done. Aside from that I guess I wasn’t too frazzled.

Although temps in the 80s had me sweating through the previous night’s run, it was overcast, windy, and actually a little cold for the race. I heard conflicting reports about the water temperature which may have ranged somewhere around 72-74°. I probably would have been fine without a wetsuit but decided to try it. I know the buoyancy helps and my last swim in the series without the wetsuit had been a disappointment. Maybe it would help.

Like the last two times, my longer distance race of a 1500 m swim and 3-mile run started first. Our small group gathered on the dock where we jumped into the water one by one every few seconds. I hung back a little bit and hoped that the faster people would start ahead of me. It seemed to work out because I didn’t have many issues with congestion in this race. The wind created some ripples in Haithco Lake that were more noticeable in certain directions. I took in one mouthful of water that made me cough, but otherwise it was fine. I just had my typical issue of having no sense of pace in the open water. My rhythm in the pool does not translate to open water and I have no idea if I’m going fast or slow. I’m sure my wetsuit helped keep my lower half more buoyant, but I was still a little thrown off by the feeling of swimming in the full sleeves. Maybe at some point I’ll look into a sleeveless wetsuit. The swim seemed to go well enough as far as I could tell. My watch buzzed early during the swim and apparently I did something wrong. It was in normal watch mode when I got out of the water and it didn’t track my swim. Oh well! The official results said I finished the swim in 31:15. I made sure to put my watch in run mode so at least I’d know my pace for that portion of the race.

I spent 1:40 in transition, mostly trying to get out of the wetsuit. I don’t think I’m ever going to master that. I took the timing chip off my ankle because I really couldn’t get my ankles out of the damn thing. Eventually I got my act together and went out to run. I knew being wet and the cooler temps could help my pace. I was pretty excited that I kept my pace in the 7:20s the whole time. I didn’t run that fast in the other two races in the series. I knew that I could count on a distance just under 2.9 miles based on the last couple times. I was familiar with the course by now and pushed as much as I could at the end. I finished the run in 21:15 and my overall time was 54:09.

I had received a t-shirt when I got my packet at the first race. They handed out mugs as we finished the second race, and this time they handed out pairs of socks. That was a fun surprise! 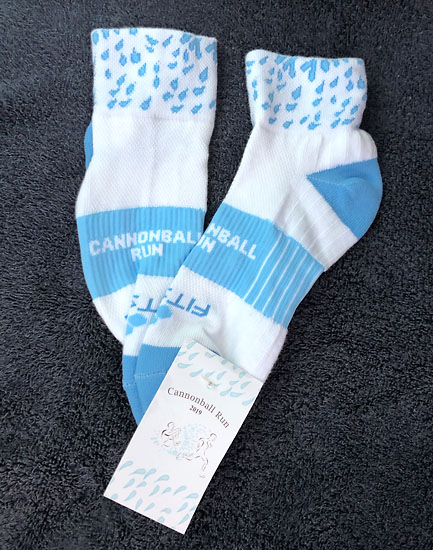 They had donuts from Tim Horton’s last time and I have to admit I was really hoping they’d have them again this time. They did! Since I was refueling after the workout AND having my dinner, I had a couple donuts, a couple donut holes, a granola bar, fruit chews, and chocolate milk. Maybe not the healthiest dinner, but I sure enjoyed it.

Results were posted and I placed first out of the five women in my race. I’m glad I was smart enough to bring a jacket and pants because I got pretty cold. Temps were in the 60s but I was wet, there was a breeze, and I had stopped moving. I got cold enough that my fingers started to lose color and go numb. I learned years ago that it’s fairly common for women and that it’s officially called Raynaud’s disease or syndrome. I’m fine while running but sometimes it hits my fingers later if I don’t keep myself warm enough. It usually happens in the winter though, not in August! It kind of blew my mind that I’d been so hot while running the night before and a night later my fingers were numb.

Awards were given out for that night’s race first followed by winners for the overall series. They got to first place for the women in the long course and said, “This is where consistency pays off.” Since I had shown up to all three races I suspected that meant I had won – and I was right! I received a cannonball award that was really heavy along with an envelope. 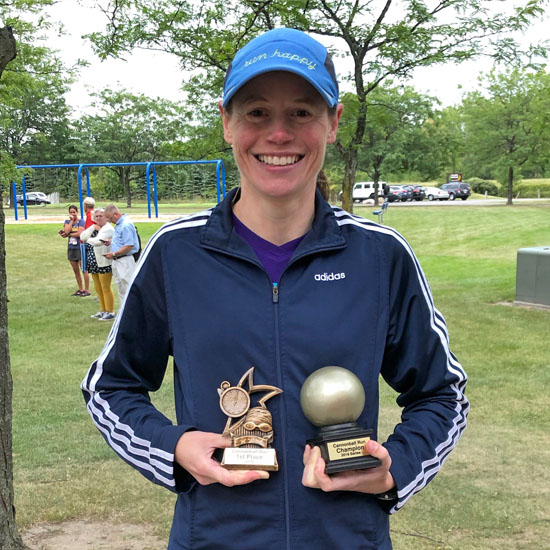 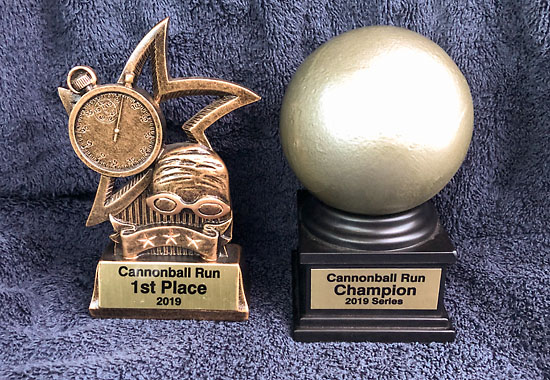 I was standing next to a guy who was also a winner in the overall series. I heard a surprised reaction from him when he opened his envelope and figured I ought to look at mine. I understood his reaction when I saw a check! There was a certificate that says next year’s race entry fee will be refunded if I show up to all three races, and there was a sizable check as well. Enough to pay for my entry fee, all of the gas I used to drive there three times, and then some. I was pretty blown away. 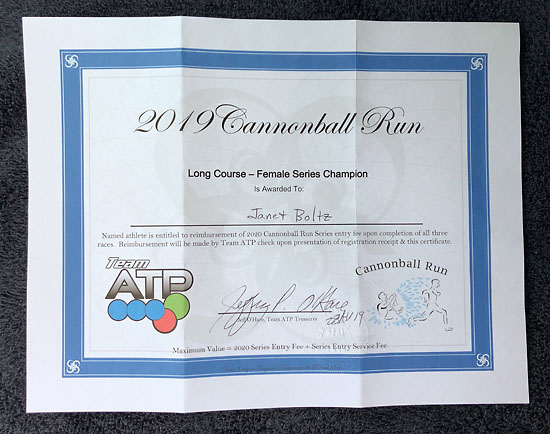 I stuck around for the raffle that followed the awards and it seemed like nearly everyone won something. I won a Cannonball Run mug with a Road ID gift certificate in it. I already had the mug from the last race so I asked around to see if anyone would like it and eventually I found a taker.

Looking back at the whole series, my fastest time was the first race. That time I had my best swim and was fourth out of nine women overall. The second race was my slowest and I placed second out of five women. I ran my fastest time in the third race and improved my swim time from race #2. I was first out of five women. What’s really funny is that my transition time in races #1 and #3 was 1:40. I wore a wetsuit for both of those races. Once again, my consistency is pretty crazy.

I don’t want to discount my actual racing, but I won the overall series simply because I kept showing up. Of course my effort helped, but sometimes being consistent counts too. Two of the faster women from the first race didn’t race the second two. Another woman who was ahead of me in the first two races didn’t show up for the third. It’s a good thing I didn’t give in to temptation when I considered skipping this race!

This series was a great experience. 3 Disciplines teamed up with the Saginaw triathlon club Team ATP, and the club did an amazing job hosting the series. I received a t-shirt, mug, and socks between the three races. They had nice awards at each race, and their cannonball awards were pretty awesome. I’m very appreciative that I can race for free next year if I make it for the whole series, but I really couldn’t believe that they awarded prize money as well. Huge thanks to them!