Apparently the hills at the Labor Day 30K weren’t enough to scare me away from Milford because I returned the following weekend for more hills at the Prove It 5K/10K. I think NOW I’ve had enough of Milford’s hills for a while.

Trivium Racing‘s Prove It race took place on Saturday, September 7th at GM’s Proving Ground in Milford, MI. I don’t think I’ll ever forget running the 5K there in 2016 when it snowed on race day. In the middle of May. I’m especially scarred by that experience because I ran a miserable marathon two weeks later when it was 70° and humid to start and I was not acclimated for those conditions at all. I guess this race had a couple of rough weather days when it was held in May so they switched it to September this year. Fortunately the weather cooperated this time and it was 61° at the start.

This is another race that I signed up for partially because my friend Lisa put the idea in my head. I realized I had 10 miles at marathon pace on my training schedule and the 5K/10K double would fit perfectly. In addition, I thought it would be nice to represent and show my support for the Chevy Running Club at this race since they play a large role in making it happen. It’s also a pretty unique and cool experience to run around one of GM’s test tracks. Speaking of unique…check out this wild race shirt! 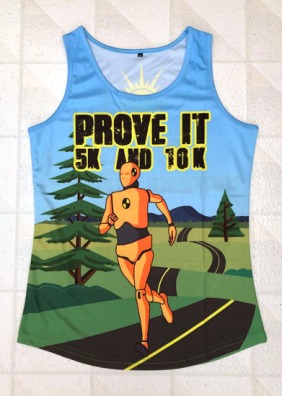 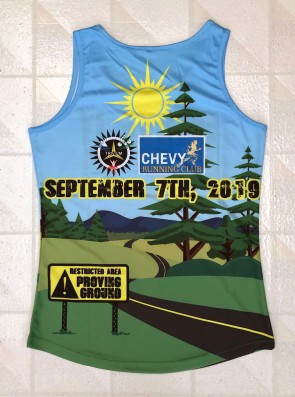 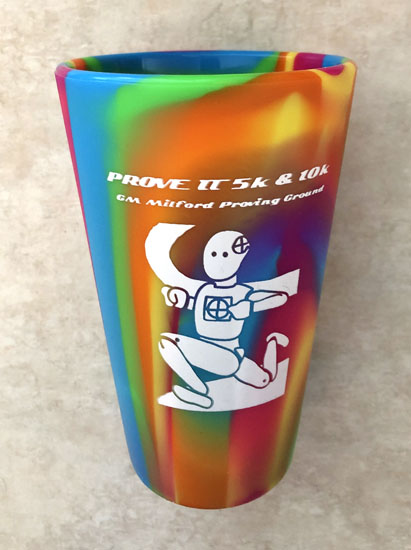 We also received this cup in our race packets

The 10K was a new addition this year and started first at 8:30. We couldn’t park right by the test track and it’s about half a mile from the parking lot to the start of the race. I saw Jordan from the Chevy Running Club and he let me know that our race packets were set aside under a tent for our group. We chatted for a bit and he was on board to do a warm up jog prior to the start. I was thankful that there was a bag drop area since it was a cool morning. I could leave my jacket and other stuff there rather than make the long hike back to the car.

Jordan and I ran a quarter mile out and back and I definitely needed it to help loosen my heavy legs. We headed uphill to start which quickly reminded me what we were in for with this race. When I did it for the first time in 2016 I had expected a flat, round race track. I didn’t realize that it would have lots of twists and hills. I remembered that it was a challenging course but I didn’t remember how hard it truly was. 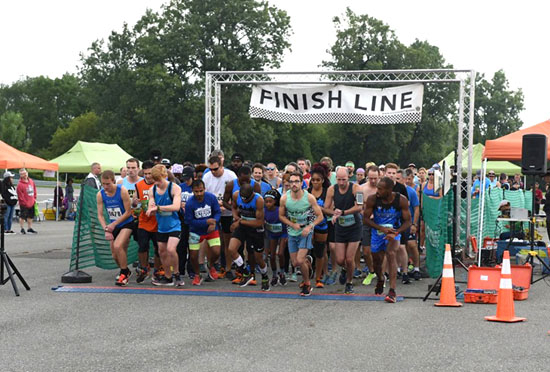 I dragged as we headed uphill at the beginning, but fortunately the downhill stretch that followed helped get me moving. I didn’t see it for long since it was ahead of the speedy runners, but how cool is it to have a Corvette lead a race on a test track?

Many thanks to Trivium for providing a ton of great photos on their Facebook page. The photo below gives you an idea of what the rolling hills were like along this course.

The track is banked in some spots. We didn’t have to run any extreme angles, but there were some areas where I made a point of running as close to the bottom edge as I could to try to find the flattest spot. I have enough tweaks on my left side that I didn’t want any of my issues to flare up by running unevenly along the banked surface.

Oh boy, those hills. Like I said, I remembered it was challenging but this was a lot harder than I remembered. Had I stuck with my training plan and actually run marathon pace maybe it wouldn’t have hurt so much. Of course I couldn’t help myself and pushed the pace, ending up a good 20-30 seconds per mile faster than I probably should have been going. The 10K was two loops around the course. I’d only run one loop in 2016 and I have a feeling doing multiple loops this time enhanced the difficulty. I tried not to think too much about how brutal a third lap would be for the 5K race that was coming next! 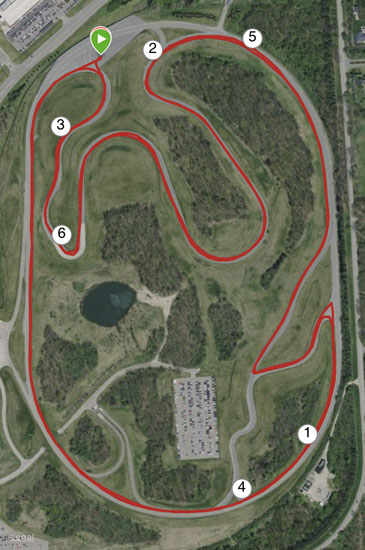 Thanks to a pretty steep downhill stretch at the end at least I was able to finish strong and flew across the finish line.

I was pretty excited that I was the second place female! My time was 47:23. Since the course was certified it was a little long, so I like believe my Garmin’s pace of 7:31/mile. 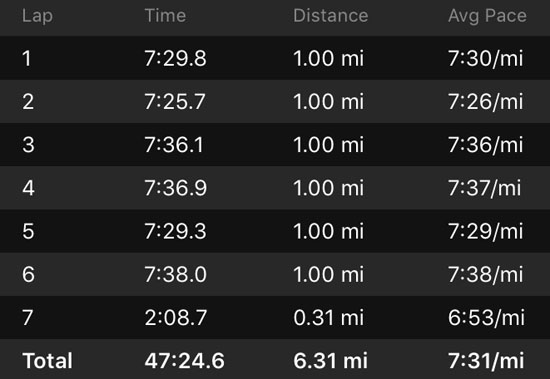 It took a few minutes to recover from getting beat up by that course. Then I had about an hour to kill before the 5K started. I was sweaty and it was breezy and cool. It didn’t take long before I started to get cold. Somehow I had to avoid stiffening up with all that downtime. I talked to some of the Chevy people for a bit and had some water, then I jogged about a quarter mile to the porta-potties. I jogged back and tried to keep moving for a bit. My legs felt pretty heavy and I wasn’t feeling too confident about still having to race the 5K. I ate a few of my Clif Shot Bloks in between and figured I’d hold off on the post-race treats until I was totally done so I wouldn’t mess with my stomach.

The Chevy Running Club got a group photo prior to the start of the 5K.

Then it was time to do it all over again. I was kind of dreading it! 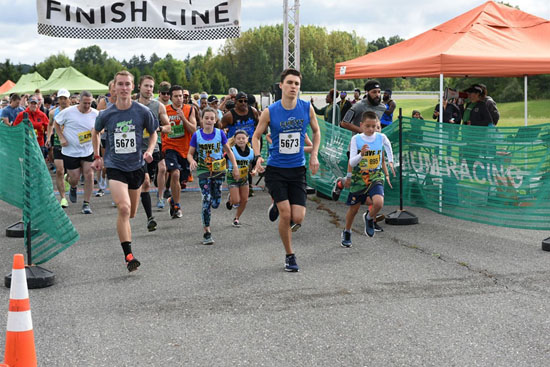 These pictures make the course look really cool. It really is a privilege to run on a test track like that. It hurt though! Once again, I made things harder on myself by running faster than I should have. I haven’t been doing speed workouts much during training since I’ve been racing so much, so I figured it’s okay to give a little more effort while racing. The uphill start was nasty the third time around but I was thankful every time I went downhill and regained a little speed. I realized I was among the top women again which was one thing that helped pull me through. I just had to keep pushing. Somehow my pace was only a little slower than it was during the 10K. It felt a whole lot worse though!

SO happy to be done!

Again, I’ll go with my Garmin time since that makes my pace look a little faster. 7:33 pace for the 5K after running a 7:31 pace for the 10K. I’m pretty psyched about that. Plus, I placed as the third woman this time.

Brutal, brutal, brutal. But I did it. It definitely was a good workout and I keep telling myself that all of this hill training is making me stronger. It sure better! 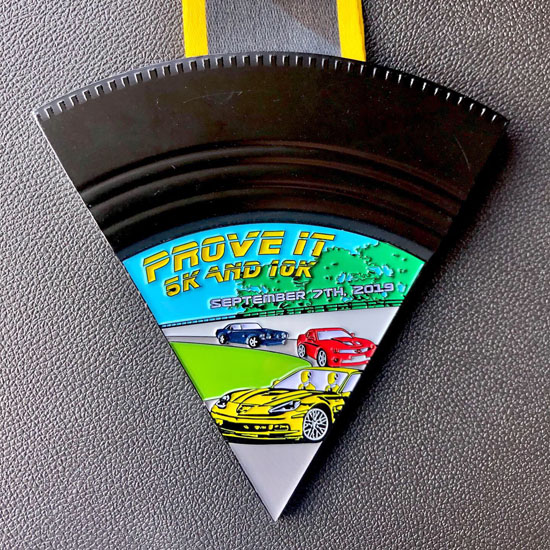 Now it was time for trail mix, pretzels, and a granola bar. Plus an extra bar of my own and more later in the car before I left because I ran 10 miles and wanted lots of food. I stuck around for awards because they were giving out age group awards for each race, awards for the 5K/10K combo winners, plus age-graded awards. Age-graded results factor in age and gender and try to balance things so that everyone is competing on the same level. The same top people ended up winning almost every category. For the age-graded results I was 17th out of 324 for the 5K and 11th out of 162 for the 10K. I was the second female out of 29 for the double. Only the top winners were awarded in each category and the woman ahead of me in both races was in my age group. I didn’t get anything, but I was still pretty thrilled that I had done so well.

This one was really tough but also really cool. It was nice to see Lisa and her husband at yet another race and it was fun to catch up with people from the Chevy Running Club too. I’m finally taking a weekend off of racing this coming weekend but I’ll be back at it for the Brooksie Way Half Marathon on the 22nd. That will be another hilly one so hopefully these last two races in Milford have prepared me for it.