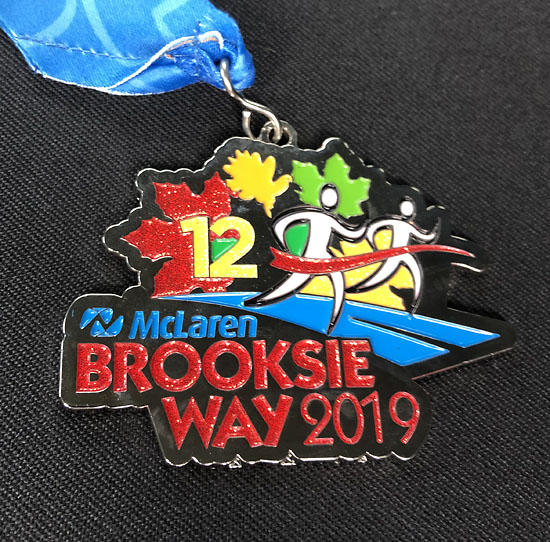 Now that it’s officially fall, the Brooksie Way Half Marathon officially wrapped up my summer of racing practically every weekend. Sunday, September 22nd was my fifth time running the race around my great town of Rochester Hills, MI. As challenging as the course may be, it’s hard for me to resist running this one knowing that it’s happening half a mile down the road. Seeing so many running friends and familiar faces both participating and spectating always makes it a fun event. 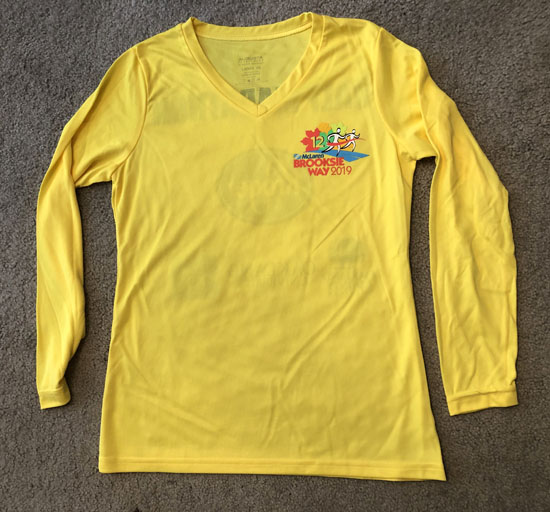 I donated some canned goods at last year’s expo and received a $15 discount code from Kroger for this year’s race. I did the same thing again this year since it’s very likely that I’ll run the race again next year. My final 20-mile run for Chicago Marathon training was scheduled for the day of Brooksie. I figured I’d run seven miles beforehand and use the race to get through the majority of the distance. That meant that I probably wouldn’t really “race” this one, but there’s always that little bit of hope that I might have it in me. Spoiler alert – since this was my slowest Brooksie yet, nope, I didn’t have it in me!

Brooksie weekend was the peak of my marathon training with a total of 56 miles for the week. I was supposed to run 10 miles at marathon pace the day before the race but I took it easy. I hoped maybe I could save that kind of pace for the race. Saturday’s run was gross and humid but at least it prepared me for similar conditions on race day. Although humidity usually zaps me no matter what, being acclimated does help. It’s been warm enough lately that I’m still used to it. That 10-mile run reminded me that hydration would be a big factor. One 21 oz. bottle was barely enough for 10 miles, so maybe using my two-bottle hydration belt would be wise for Brooksie.

I followed through with my crazy plan of doing a 7-mile “warm up” run prior to the race and arrived around 6:15. As early as that was, I ran into a few people I knew right away. I was participating in the Corporate Challenge with the Chevy Running Club and ran into one of our team leaders. I helped him carry the team tent over to the field then told him I had to head out so I could get my miles in. I started my loops around Oakland University’s campus with a headlamp and glowing vest since it would be at least half an hour before the sun rose. Once I got onto the main part of campus there was plenty of lighting though. 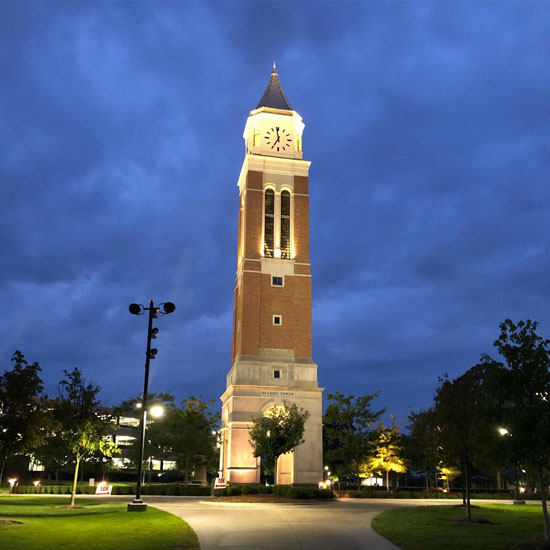 Oakland’s campus has a good amount of rolling hills but I kept my pace easy enough to manage them. Still, half a mile into the run the temps in the 70s plus the early morning humidity hit me. It was going to be a tough, sweaty day. I planned everything very carefully so my timing would work for the race. I figured the warm up run would take around an hour and I wanted half an hour of downtime prior to the race. I had scoped out a map of the 10K race route around campus so I knew where I could find a porta potty along the way. I was able to get one all to myself a mile from the start and avoided the long lines that had built by the time I got back. I arrived a few minutes before our Chevy group gathered for a photo then I went back to the car to clean up a little. I’m glad I was smart enough to bring an extra shirt since mine was drenched at that point. I was parked next to some local running friends who knew what craziness I was up to with my run before the run and we laughed about it. 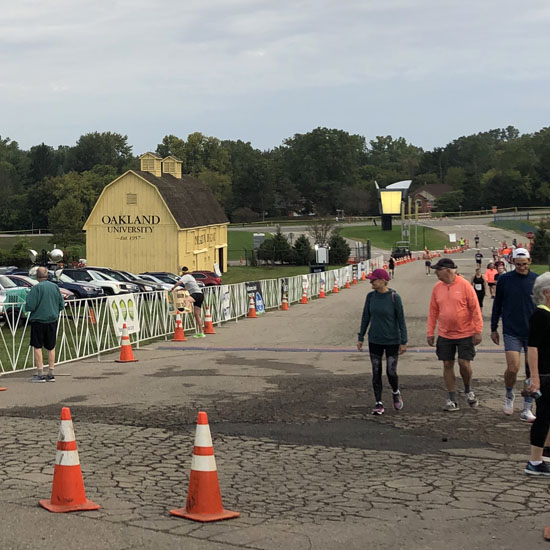 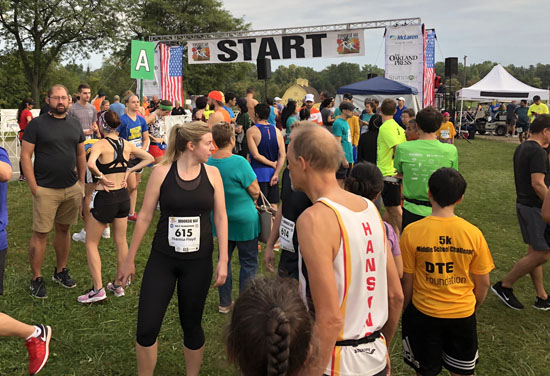 I came across my friend Jeff in the starting corral and he smartly advised that we should probably start closer to the front of our wave. At 8:06 we were off! It helped that we started downhill, but once I hit the first slight incline I could feel the weight of the two bottles on my waist. It would help keep my pace in check early and I knew they’d get lighter as I went. The race starts with a decline for the majority of the first five miles or so and I took advantage of that. I was able to run close to marathon pace even though my legs weren’t especially fresh. When things flattened out and we hit the first hill heading into downtown Rochester, I knew I couldn’t keep it up. I got 4-5 miles in at my goal pace then gave up on that plan. It was too warm and humid to maintain it and there’s no way I’d keep it going once we hit the “real” hills. Ultimately, I was there to get my 20-mile training run done. I adjusted my thinking and decided it was time to give up on trying to “race” and knew I should approach it as more of a training run. I just had to run whatever pace worked to successfully complete my last big long run and keep in mind that Chicago is the real goal. 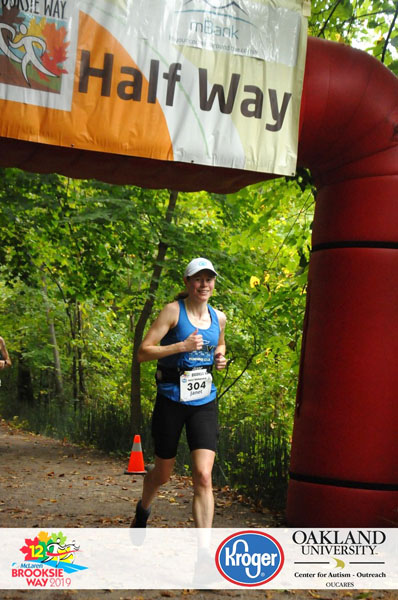 Even though the hydration belt may have seemed excessive, it was the right choice for me to wear it. I had one bottle of GU Brew and one bottle of water. I also ate one Clif Blok almost every mile and hoped that would be enough. I didn’t eat anything other than a couple Bloks between the warm up and the race because I thought it would be risky for my stomach. It was a relief knowing that I had plenty to drink whenever I needed it. Brooksie was similarly hot and humid a couple years ago and one bottle hadn’t been enough for me. I kept grabbing water along the course in addition to drinking from my bottle that year, but I was too thirsty and had a rough time. I think it really helped this time that I stayed hydrated enough.

Still, it got rough at times simply because course is difficult and the conditions didn’t help. The first half of the course is downhill or flat for the most part and the major rolling hills come in the second half. I’m very familiar with the course yet the first steep hill that comes around seven miles into the race felt so much harder than all of the other times I’ve run it this summer. There are plenty of times when I thought about how walking would probably be nice but I didn’t do it. Instead, I just felt like I was slowly trudging along at times. It was a grind so it was helpful to see the spectators along the way. I thought it was funny that right after I had thoughts of getting pizza for dinner I happened to pass spectators holding signs about running for a purpose with little pizza guys all over. There were several bands/musicians along the course and some enthusiastic aid stations as well. A marching band was there to give us an extra boost up that first bad hill. The students who line both sides of the street in front of Adams High School are always extra loud and awesome. With my name printed on my bib, it was fun to hear people shout my name and encourage me. One familiar face did that when I had a mile or two to go. Early in the race I had noticed a spectator who had been a DJ on the radio station 89X. When I saw him again later, he called my name since it was on my bib and told me I was doing great. I think I threw him for a loop when I responded, “Thanks Cal!” He and his friends laughed and that helped boost my spirits as well.

I didn’t really have it in me to pick up the pace for the last few miles like I usually try to do, but I did end up finishing fairly strong. That last uphill climb to the finish didn’t make it easy though! 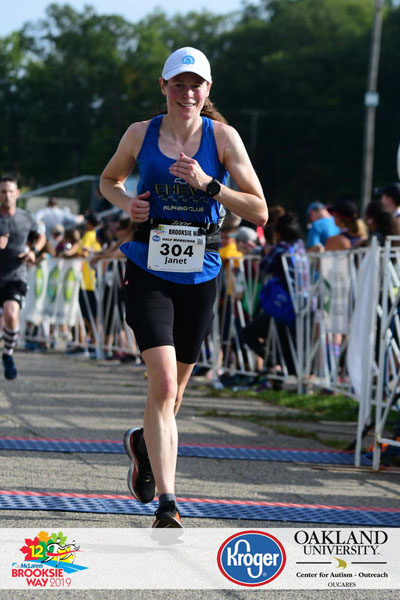 I finished in 1:50:25, which was about two and a half minutes slower than my previous slowest Brooksie time. I typically don’t run seven miles prior to the race though! I managed to run an 8:26 average on a challenging course in difficult conditions to wrap up 20 miles, so I was plenty happy with my results. 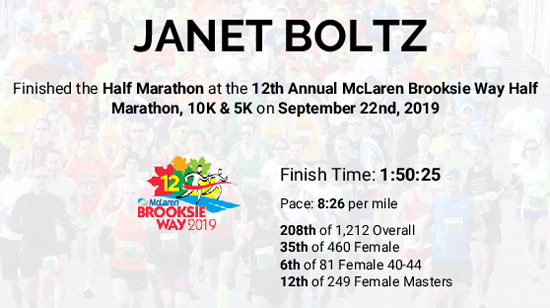 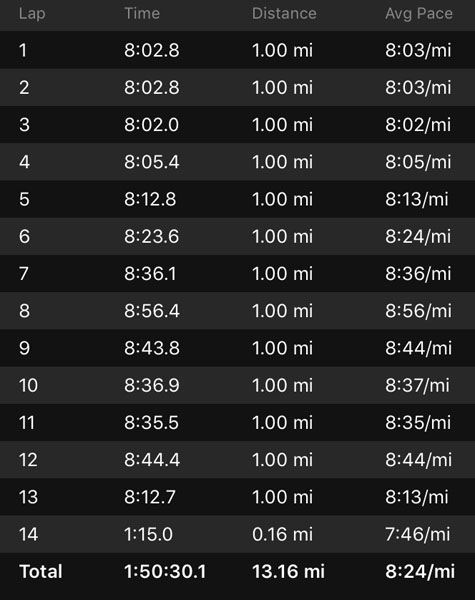 I collected water, chips, a Rice Krispies Treat, and a granola bar then found one of my Chevy running buddies. Since the post-race snacks are fairly minimal considering the distance we just ran, I’m thankful that I’ve always had access to the corporate team tent with catered food. Runners from all of the different corporate teams join together there and it’s fun to catch up with people after the race and hear how it went. There was salad, pasta, mac and cheese, bread, and beer. That was much more filling than my other post-race snacks.

Sometimes I question why I choose to continually return to a course that can be so difficult, but I love this race. It’s a community celebration with friends everywhere and sometimes the feeling of accomplishment is even greater when it’s so hard. It was fun to run alongside and chat with friends for brief moments during the race. Plenty of Chevy teammates were around and we often rooted for each other as we crossed paths during the race. I saw a woman I know from the gym cheering for people. I saw runners who I recognize from the trail out taking race photos. There was a friend handing out water at an aid station. I knew people all over the place which makes things fun even when it’s a struggle. When the weather has been nice and cool, I’ve actually had some pretty solid races at Brooksie. When the weather has been warm and humid, it seems to accentuate the difficultly of the course. I never know what I might get when I sign up, but I always have fun. 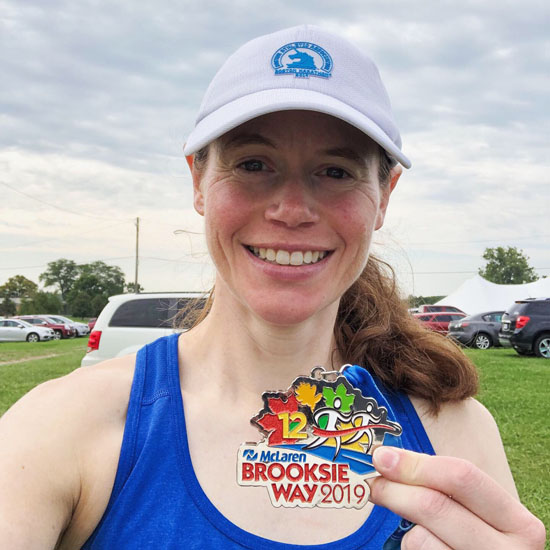